Home / Comics / The man who will be Wolverine meets Mr.Sinister in Origin II

The man who will be Wolverine meets Mr.Sinister in Origin II

Logan runs into that creep amongst creeps, Nathaniel Essex in the third issue of Origin II. 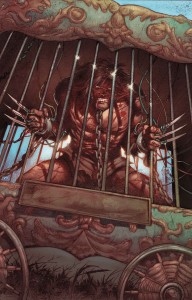 This February, blockbuster writer Kieron Gillen and rock star artist Adam Kubert peel back another layer in Wolverine’s shadowy past – and today, Marvel is pleased to present your first look at ORIGIN II #3! Witness the very first meeting of the mysterious mutant and the man who would become one of his greatest enemies – the malevolent Mr. Sinister! Broken and savage, the clawed mutant has been pulled back into the world of civilization – by force! Brutally beaten and held captive, the ferocious first “X-Man” is forcibly experimented on by Nathaniel Essex and his Marauders. And the only man who can save him is…Creed?!

But amid the horrors visited upon him, James Howlett may find the one thing he thought lost forever – his humanity. At some point the Wolverine must choose: is he man or beast? What shocking revelations lie in the untold story of Wolverine’s past? Find out this February in ORIGIN II #3!

Marvel’s fleshing out of Logan’s past continues here as we also get to meet Mr. Sinister in what I’m guessing has to be his earliest appearance in the Marvel U outside of a flashback or two. I must not be up on my X-Men villain history either, because I had no idea the Marauders went that far back in series lore.

The fact that Logan is basically recovering from a feral state is pretty interesting too in that he’s seemingly reveled in being a berserker in the past. Victor Creed as a savior is kind of bizarro too; although I’m sure it’s a role he’d relish when it comes to Wolverine in any era.

Check out the further demystifying of Wolverine’s shrouded past as Origin II #3 hits the stands on February 26th from Marvel Comics and the team of Kieron Gillen and a personal favorite artist of mine, the great Adam Kubert.

Jason's been knee deep in videogames since he was but a lad. Cutting his teeth on the pixely glory that was the Atari 2600, he's been hack'n'slashing and shoot'em'uping ever since. Mainly an FPS and action guy, Jason enjoys the occasional well crafted title from every genre.
@jason_tas
Previous Tritton 720+ 7.1 headset ships out for the PC
Next Innex brings a new retro three-in-one console to market