Something odd is going on in Serpent Creek. 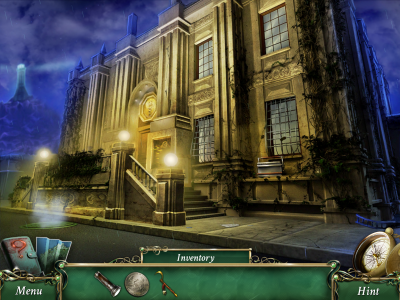 As the game begins, you receive an eerie phone call from a close friend. Helen is a journalist who traveled to Serpent Creek to report on the annual Serpent Festival, and has now disappeared under mysterious circumstances. Like the good friend you are, you immediately take off for Serpent Creek, only to be met with the vision of an odd, snake-like creature attacking the hotel clerk the moment you reach town. Something is definitely going on here, but with the whole town acting as though nothing is wrong and Helen was never there, it’s up to you to get to the bottom of things and save your friend – and perhaps the whole town – in the process. 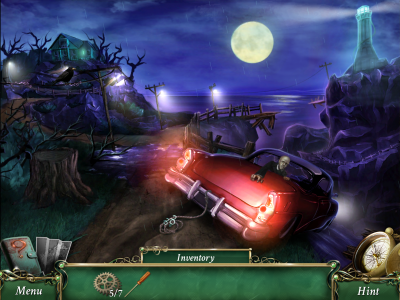 9 Clues plays out in standard hidden object adventure fashion, with a few extras thrown in for variety. You’ll be wandering various environments in Serpent Creek, uncovering clues and interviewing people as you search for the truth. There are often items of interest lying around for you to find and pick up. Finding them is often easy – it’s figuring out where and how to use them that’s the real challenge. There are also a number of standard hidden object finds to work your way through. These involve finding a list of items amongst a jumble of objects on a set screen. Some of the items are highlighted in blue, which means you’ll need to go through an extra step or two to find them. For instance, you may need to find a match and use it to light a candle before it can be collected. While this adds a little bit of challenge, you’ll find that most of the object finds aren’t super challenging. 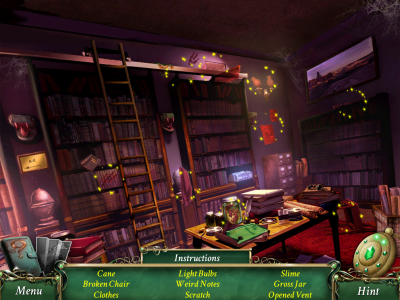 In addition to finding objects, you’ll also take part in a number of mini games that serve to advance the game. These involve things like putting gears in place in order, reassembling torn pictures, and finding the right patterns to pick a lock. They are fairly challenging but not overly so, and can be skipped after a time if you get stuck (or if they just aren’t your thing). Finally, 9 Clues has detective mode, which is an interesting addition to the standard hidden object formula. You’ll be presented with a fixed screen, much like the other object finds, but in this case it is a crime scene that must be searched for clues. You won’t get any hints as to what the clues might be, just a number of clues that must be found. The clues can be things like overturned chairs, footprints, etc., and are used to piece together an idea of how the crime played out when all are found. It’s a neat addition that really adds to the mystery feel of the game. 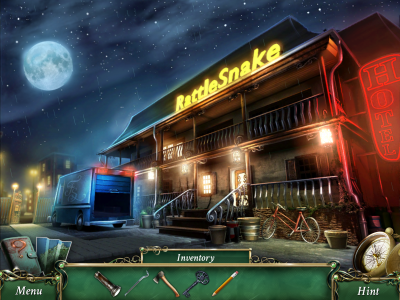 9 Clues:  The Secret of Serpent Creek is an engaging hidden object adventure that keeps the action casual with puzzles that are interesting but not overly challenging. There are a variety of puzzle types to keep things fresh, and various difficulty levels to match every skill level. While the spooky serpent creature may be a bit scary for sensitive youngsters, it’s otherwise perfectly accessible for gamers young and old. The retro 1950’s setting adds to the fun, and the puzzles all fit well with the story. 9 Clues is a great choice for hidden object fans looking for a casual experience with a quirky story line.

U.S. Senior Editor/Deputy EIC at BrutalGamer, mother of 5, gamer, reader, wife to @MacAnthony, and all-around bad-ass (no, not really)
Previous Loki: Agent of Asgard #1 (Comics) Preview
Next Take a look at what Infinity Ward is cooking up for the first round of Ghosts DLC