DST’s first foray into the Star Trek: The Next Generation era begins this week with the introduction of their Star Trek Classics Captain Picard figure. 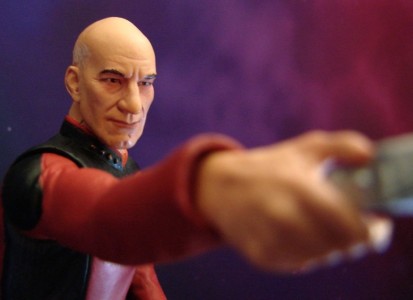 Is it the 24th century already? It must be, because this week’s New Toy Day brings one of the 24th’s greatest starship captains, the commander of the U.S.S. Enterprise NCC-1701-D, Captain Jean-Luc Picard! Jean-Luc is the newest Star Trek Select figure from Diamond Select Toys, and he hits comic shops and specialty stores across North America today!

This 7-inch scale figure is based on Picard’s appearance in later seasons of Star Trek: The Next Generation, and features 7 points of articulation as well as a detailed display base with removable Borg parts. Check out a new gallery of images, and look for Capt. Picard starting today at your nearest comic shop. You can find your nearest comic shop at comicshoplocator.com, and if they don’t have it, ask them to order it!

As much as I liked DST’s Kirk and Spock that debuted last year, this one is a lot nearer and dearer to my heart since TNG is far and away my favorite era of Trek TV. I like the choice of uniform as well as it probably represents the seasons from the show that most people instantly recognize and, although I am a little partial to the movie grey/black color scheme, it’s just plain iconic.

That base is pretty wicked too (check out the gallery below) and features a destroyed Borg drone sprawled out across it. The Borg of course, played a huge part in The Next Generation’s run in both the films and on television and it’s only fitting that the first figure in the new sub-line pays homage to this classic sci-fi villain.

Any way you slice it though and whatever your preferences might be towards Star Trek toys, it’s just nice having a new line on the shelves in any form.

Jason's been knee deep in videogames since he was but a lad. Cutting his teeth on the pixely glory that was the Atari 2600, he's been hack'n'slashing and shoot'em'uping ever since. Mainly an FPS and action guy, Jason enjoys the occasional well crafted title from every genre.
@jason_tas
Previous The Punisher #1 (Comics) Preview
Next NASCAR ’14 heads towards the finish line