Otto gets a dose of Venom and goes toe-to-toe with Earth’s Mightiest Heroes. 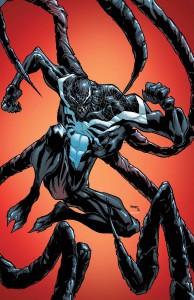 This January, the Superior Spider-Man reaches his landmark 25th issue – but will it be his last?! From all-star creators Dan Slott, Christos Gage, and Humberto Ramos comes the shocking conclusion of Darkest Hours! For years, the symbiote has tried to return to its original host – and now it finally has! Peter Parker was strong enough to overcome the symbiote’s dark grasp – but is Otto Octavius? The Superior Spider-Man is no more. There is only…the Superior Venom!!

“The creative team of Slott, Gage, Ramos, Olazaba, and Delgado has been knocking each and every one of these issues out of the park with their particular brand of action and humanity that you really can’t find anywhere else,” says Editor Ellie Pyle. “But this issue has surprises we haven’t even hinted at!”

It’s all been leading to this! As the Superior Venom battles the Avengers – the Goblin King’s final pieces fall into place. And seeds sown here bear bitter fruit in the upcoming Goblin Nation arc! Not everyone will make it to issue #26. You cannot afford to miss the utterly shocking SUPERIOR SPIDER-MAN #25!

In all honesty, if you had told me when Peter Parker got possessed by Doc Ock that the new ‘Superior’ book would be making it all the way to a twenty-fifth issue I would have said you were crazy. As much as I’m not a fan of Pete’s disappearance and replacement within his own mind though, the comic has done some very entertaining things and definitely keeps bopping along thanks to the talented scripts of Dan Slott.

And I love the idea of bringing the symbiote back to Spider-Man’s body now that Pete’s not in charge anymore. Venom is another character that’s near and dear to my heart and to see a big, bad black and white symbiote in action is a real treat, especially considering that the suit has been bound to Flash Thompson for so long. Would I rather see it back in the hands of Eddie Brock? You better believe it, but I’ll take what I get for now.

I might still be counting the days till the ‘real’ Spider-Man (and Venom for that matter) is back in action, but it’s but the wait is proving to be way more fun than I thought.

Catch Superior Spider-Man #25 when it hits the racks on January 15th from the team of Slott, Christos Gage and artist Humberto Ramos.

Jason's been knee deep in videogames since he was but a lad. Cutting his teeth on the pixely glory that was the Atari 2600, he's been hack'n'slashing and shoot'em'uping ever since. Mainly an FPS and action guy, Jason enjoys the occasional well crafted title from every genre.
@jason_tas
Previous Activision outlines Call of Duty: Ghosts Season Pass in new trailer
Next MX vs. ATV pulls out of limbo, returning in 2014