Gotta catch ’em all and Nintendo is hoping that a Poke-pack-in will tempt gamers into grabbing a new 2DS console this Holiday. 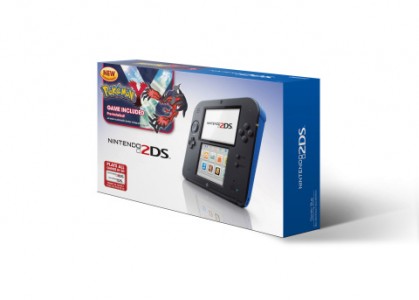 The two bundles that are incoming (one for each game) will be store exclusives with a red ‘Pokemon X’ edition appearing at Target stores and a blue ‘Pokemon Y’ version showing up at Toys R Us’ nationwide. The consoles will be themed to the packaging (with one blue and one red- though it doesn’t look like either will have any kind of Pokemon branding) and will be available at the respective retailers either in-store or online.

Each version of the 3D-less Nintendo 2DS will feature a pre-installed copy of its chosen Pokemon title with no actual game cards in the box. Both will also be limited in availability with Nintendo saying that once they’re gone, they’re gone.

If you want one, either version will cost you $149.99 USD and will be available starting this coming Friday (the 6th).

Jason's been knee deep in videogames since he was but a lad. Cutting his teeth on the pixely glory that was the Atari 2600, he's been hack'n'slashing and shoot'em'uping ever since. Mainly an FPS and action guy, Jason enjoys the occasional well crafted title from every genre.
@jason_tas
Previous Empire of the Dead #1 (Comics) Preview
Next IDW brings Artful Daggers to print