The wait is finally over, Super Mario 3D World is here at last. Does it live up to the legacy of its 3D predecessors? 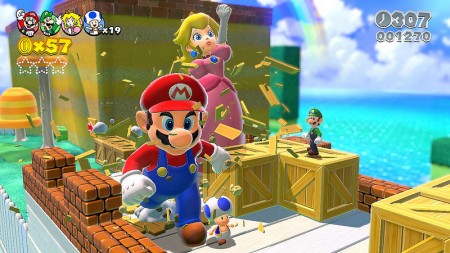 Super Mario 3D World is the Wii U‘s latest 3D Mario, and spiritual sequel to Super Mario 3D Land. While the game certainly shares some similarities with its 3DS counterpart, it’s head and shoulders above it in quality and charm. Like all of the main Mario titles, Bowser is once again causing havoc for Mario and his friends; only this time, the commotion doesn’t take place in the Mushroom Kingdom. The story starts out with Mario, Luigi, Blue Toad and Peach admiring the fireworks display on a starry night in the castle courtyard. They spot a clear pipe in the ground, which appears to be broken. Mario and Luigi quickly fix it up, only to discover a creature known as a sprixie popping out of it.

After she tells them about Bowser and his mischief in the sprixie kingdom, the koopa king pops out, capturing the sprixie. The heroes give chase, and attempt to rescue the captive sprixies scattered across the kingdom. It’s a vaguely similar plot to Super Mario Bros 2 USA, and makes Peach’s involvement in the story logical. Overall decent, and not an intrusive plot, as the main focus is the spectacular gameplay. The level design is wonderful, full of life and imagination. Even though your typical worlds like a desert, grassy plain and volcano show up, each level is always throwing something unique at you. One minute you’re skating across a frozen lake surrounded by goombas in giant ice skates, and the next you find yourself diving into a lagoon filled with sharks that have spiky columns for noses. You rarely ever experience a dull moment in the game, and the platforming is absolutely superb.

The stages on average were challenging, but fair. It started off on the easy side in the first two or three worlds, but quickly ramped up. When you’re playing the levels and you happen to fail, you feel like you legitimately made a mistake, as opposed to it being due to poor level design. For example, one level had platforms hanging from chains, and on those platforms were spiked logs that rolled left and right depending on the platform’s direction. Sometimes I misjudged with Peach, and thought I could make it on a platform, but it swayed away from me right before I could reach it. This caused some frustration, but I knew it was because of my own fault; and even after I beat it, the stage didn’t get too easy the second time through. It keeps its level of difficulty after you’ve conquered it.

The characters themselves add much variety to play throughs of stages. Mario is the all around character with no specialties, Luigi is the highest jumper, Peach can float in the air, and Blue Toad runs the fastest. The best part of it all was being able to switch between them freely at any given moment, just like Super Mario Bros 2. Changing characters several times throughout the game added spice, and even some challenge on certain stages. The maps themselves have some interactivity, with characters being able to jump, collect coins, and hit blocks. You’re not confined to a line which goes from one dot to the next, signifying stages, so you have the freedom to roam around pretty much wherever you so choose. To progress pass certain points in the game, you will need a certain number of green stars, however stamps aren’t mandatory for progression.

It’s a good idea to collect them though, as they’re necessary to unlock the final secret world. There are 12 worlds in total, making for a pretty long and satisfying adventure. Sometimes you’ll come across mini games like Captain Toad, Mystery Boxes, and even battles against enemies on the map. The progression in each world is somewhat divergent, allowing you to choose certain levels over others in order to make your way through the maps. The power ups in this game are a blast to use, and change up the dynamic somewhat. The cat suit gives you the freedom to climb over obstacles, even avoiding death in certain spots. The tanooki suits makes its return, giving players the ability to hover. The cherry is arguably the most interesting, with its ability to make clones of your character. It seems that there is no “leader” so to speak, so having at least one alive is all that matters. In other words, you control the group entirely, there is no single character that the clones must follow.

The music in Super Mario 3D World is very jazzy, and altogether catchy. Each theme sets the mood for courses without being too cliche. An example of this would be the tropical beach music; you hear a mix of saxophones and steel drums. The game looks beautiful too; for all the complaints that are levied against the Wii U and its capabilities, you can’t deny that this a title that looks stunning. I find myself stopping to appreciate the little details, such as the shine on the piranha plants in world flower-3, and the glow of the torches on the monsters as they illuminate them in the darkness. Even though Super Mario 3D World is a rather cheerful and light hearted game, there were touches of ambiance such as the above mentioned. You stop and observe the rain as it reflects on surfaces, characters and enemies, and take in some of the surrounding areas.

Well, my name's Christopher Deleanides as you all know and I'm the Nintendo Editor here at BG. I've been playing video games since 1992, and I've been a Nintendo fan the entirety of those years. My love for video games as well as Nintendo hasn't changed, and probably never will. The only thing that comes close is politics, as I'm very deeply involved in both local and international issues.
Previous Disney Frozen: Olaf’s Quest (3Ds) Review
Next Killer Instinct (Xbox One) Review