Dark Horse Comics’ hardcover adaptation of the popular (which is probably putting it mildly) Plants vs Zombies property has proven rampantly popular with fans. 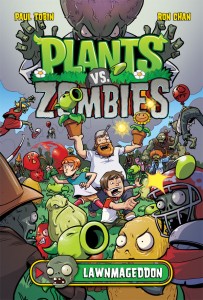 There’s no denying how popular the simple tower defense title that is Plants vs Zombies has become and this book is a direct reflection on that. The game, by developer Popcap and EA, has been ported over to just about every platform under the sun and shows no sign of slowing up any thanks to a forthcoming first-person shooter set in the fun and colorful universe.

Dark Horse’s first foray into the world of tubers versus corpses, Plants vs Zombies: Lawnmageddon, debuted a short time ago and has racked up an impressive 17k copies sold through comic stores nationwide. So popular is the book that a second printing is already in the works which should land in stores on the 5th of February, 2014.

And if you can’t get enough of PvZ, there’s also an art book coming called, fittingly enough, The Art of Plants vs. Zombies.

Look for it to be out this coming May. In the meantime though, you might still be able to find a copy of Lawnmageddon at your local retailer; just hustle like the Disco Zombie over to your LCS if you want one, cause they’re going fast.

Jason's been knee deep in videogames since he was but a lad. Cutting his teeth on the pixely glory that was the Atari 2600, he's been hack'n'slashing and shoot'em'uping ever since. Mainly an FPS and action guy, Jason enjoys the occasional well crafted title from every genre.
@jason_tas
Previous Van Helsing complete pack hunting PC’s now
Next Midnight City joins forces with GameStop for distribution deal