Otto takes on the symbiote-powered Flash Thompson when Agent Venom comes to town and… is that another Venom lurking in the shadows? 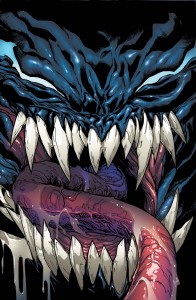 This December, Spider-Man battles his greatest foes as Darkest Hours continues in Superior Spider-Man #24 – from the critically acclaimed creative team of Dan Slott & Humberto Ramos! Nobody has tested Peter Parker quite like Venom – will Otto Octavius face the same perils? Flash Thompson is back in town for his first run-in with the Superior Spider-Man! And this clash isn’t going to be pretty! But even as the wallcrawlers clash – the Green Goblin and his army prepare to make their move. Plus, the answer to the question everyone will be asking – “Who is the Superior Venom?!” You do not want to miss Superior Spider-Man #24!

It’s such a different Spidey and Venom that the Marvel U hosts now that it’s almost like the characters don’t even have any history anymore. Well, actually it’s exactly like that now that I think about it. Venom is a hero now and the suit is worn by Flash Thompson (who’s also a war vet) and Spider-Man is, well, he’s Otto Octavius hanging out in the mind and body of Peter Parker.

Personally, I’d like nothing more than to see both characters head back to being what they really are- your friendly neighborhood wall-crawler and a big, slobbering beast. That said though, Spidey vs Venom is still a premier matchup and one that fans probably won’t want to miss out on. There’s also the added bonus of a whole new Venom creeping around in the pages of Superior, and who he might be is still a huge mystery at this point. For that alone, the price of admission for this one seems pretty legit.

Jason's been knee deep in videogames since he was but a lad. Cutting his teeth on the pixely glory that was the Atari 2600, he's been hack'n'slashing and shoot'em'uping ever since. Mainly an FPS and action guy, Jason enjoys the occasional well crafted title from every genre.
@jason_tas
Previous MOGA announces first official iPhone controller
Next M.O.J.O. (Hardware) Preview