Yes, FCBD is a while off yet, but Marvel is busting at the seams to talk about what’s coming on the big day for the Guardians of the Galaxy and Spider-Man. 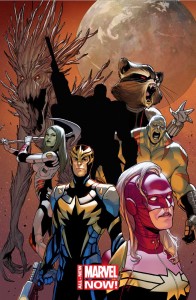 Both big time properties for FCBD 2014 are indeed on their way to the big screen in the form of Guardians of the Galaxy (which is a pert of the Marvel Cinematic Universe) and The Amazing Spider-Man 2. As far as what’s in store for both comic book versions of the characters books, Marvel is promising some major stuff for Free Comic Book Day.

There’s more info on what’s to happen in Guardians of the Galaxy right now than Spidey, which is probably because the Spider-Man event is super hush-hush at the moment (hmmm…). As far as GotG though, you can expect to see Captain Marvel join the ranks of the super-team and a secret character that’s yet to be named will also be on board. Of course, all this doesn’t mean things are going to get better for Starlord and his group.

“With Nick joining the all-star creative of Brian and Sara Pichelli, Guardians of the Galaxy promises to be THE book that Marvel readers will be talking about all the way through to the opening of their movie in August,” says Senior Editor Stephen Wacker. “And with two new members causing all sorts of problems, the galaxy’s least likely super hero team is going to find itself in a whole mess of trouble.”

Back to Spidey for a sec. That GotG free book will feature a special back-up story about the wall-crawler from Dan Slott and Giuseppe Camuncoli, who’s been doing an awesome job penciling the web-head. What can you expect from it? Just a story that will “rock the Wall-Crawler’s world to its core”. So, you know… no biggie.

Find out what’s on tap for the Guardians of the Galaxy and Spider-Man (crossing my fingers SO HARD for that one) with the Free Comic Book Day 2014 special edition from Marvel Comics on May 3rd.

Jason's been knee deep in videogames since he was but a lad. Cutting his teeth on the pixely glory that was the Atari 2600, he's been hack'n'slashing and shoot'em'uping ever since. Mainly an FPS and action guy, Jason enjoys the occasional well crafted title from every genre.
@jason_tas
Previous Resogun (PS4) Review
Next Dyscourse strands some game devs- think Lost, but with Tim Schafer