The Batman: Arkham series goes mobile with a visit to Gotham’s most notorious prison. 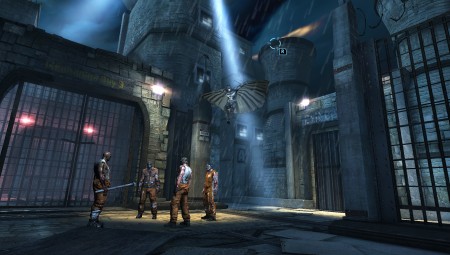 If you know the Batman books and lineage from DC Comics’ superhero universe, then you know that Blackgate is the most violent maximum security prison in all of depressed Gotham City. And from the perpetually corrupt and run-down state of the burg, that’s saying a lot. Blackgate is home to the worst of the worst who aren’t criminally insane. But that’s in the comics; in the games, Arkham Asylum hasn’t been built yet and the prison holds not only wiseguys and thugs, but also the likes of Joker in its subterranean Arkham wing.

In this way, the Batman: Arkham games divert slightly in detail from the ‘actual’ Dark Knight mythos (from the comics), but at its core this is classic Batman and the character at his most iconic. Batman: Arkham Origins Blackgate is extremely faithful in this regard too, even playing up some angles from the DCU that you might not have expected.

When the game starts off, you’re treated to a rooftop chase with Catwoman through Gotham itself. This serves as a tutorial level before you slide into the meat and potatoes that is Blackgate prison and the uprising that’s taken place there. If you played Arkham Asylum (and even Arkham City really), then you should be very familiar indeed with what that means- Batman locked in with a bunch of bad guys to knock around.

While the setting might not be groundbreaking, we saw it in Asylum after all, Blackgate plays out in a side-scrolling fashion which is most definitely new for the Arkham games. Instead of mimicking the console versions’ 3D engine, the Vita’s (and 3DS’ for that matter) entry looks and feels like classic titles in the vein of Metroid and Castlevania. This makes it different, which is a very good thing indeed.

Graphically, Blackgate is really nicely done too. The rundown halls of the prison and burning piles of debris left behind by rioting inmates really bring the place to life and give it the feel of the actual comic book locale. You can easily picture the men who’ve been locked up here and see the years of neglect coming through as one of Gotham’s dens of wickedness was rotting way before the prisoners took over.

It’s more than just the looks too, since Blackgate plays very much like Nintendo’s classic action title. As you progress, you’ll have to search every nook and cranny of the place for weapons and armor amplifications (as well as a bevy of secrets and clues) in order to proceed. Basically, if you’ve played any of the older Metroid titles, then you know what to expect- need to cross a chasm of collapsed floors whose bottom is filled with Joker Gas? Better find a line launcher somewhere. Yes, this is a mechanic that’s been used to death, but it still works here. That’s helped by the setting, the characters involved and -most importantly- the gameplay, which is spot-on.

Even though Blackgate plays out in 2D (well, maybe 2.5D), the gameplay is vintage Arkham Asylum/City. All of the counters, blocks, dodges and strikes will be instantly familiar to anyone who’s played any of the now trio of games in the main series. Likewise, all of Batman’s gadgets are present and accounted for including the explosive gel, grapnel gun and claw. It’s all spotlessly translated too with excellent and sharp control that’s extremely responsive. Fights are just as much fun in Blackgate too, and personally I don’t think it’s possible to get tired of glide-kicking into a thug and then taking down his four or five friends seamlessly- all without them so much as laying a hand on you.

I know I’ve been heaping some praise, but all that’s not to say that Blackgate is without blemishes. I ran into a number of bugs that ranged from annoying to temporarily infuriating. Just to give you a few examples; a guard that was supposed to be targetable with a Batarang wasn’t till I reloaded from a checkpoint and entering a specific secret area somehow flipped the screen around so that I was seeing from behind the scenery and therefore couldn’t navigate- had to reload there too.

I honestly wouldn’t expect to find bugs like that in a game of this caliber. Blackgate really is a triple-A release for the Vita and for it to have any major issues on the technical level just flat out shouldn’t be. I do have to add though, that I had so much fun with this game that I didn’t mind all that much reloading- and also, the game has some generous auto-saves. Thankfully.

Bugs and all, I had a great time with Batman: Arkham Origins Blackgate.

I love the idea of a side-story to the main console game instead of the usual attempted translation too. It would have been so easy for Warner Bros to have thrown together a cheap and dirty port of the PS3 version of Arkham Origins, but instead developer Armature Studio came up with a whole new narrative that even kind of serves to bridge the gap between Batman: Arkham Origins and Arkham Asylum and maybe starts something brand new (watch through the credits).

It could have been technically better, but there’s nothing game-breaking here and definitely nothing that throws enough of a Batarang into the works to ruin things. If you’re a fan of the comic books, Animated Series, Nolan trilogy or Arkham Series of games, there’s more than enough to like about Batman: Arkham Origins Blackgate to make it one prison that you’ll want to break into.

Jason's been knee deep in videogames since he was but a lad. Cutting his teeth on the pixely glory that was the Atari 2600, he's been hack'n'slashing and shoot'em'uping ever since. Mainly an FPS and action guy, Jason enjoys the occasional well crafted title from every genre.
@jason_tas
Previous Transformers game bundles coming to Wii and 3DS
Next Nintendo Direct kicks off on the eve of the holiday season