Home / News / New Contrast screens slip out of the shadows

New Contrast screens slip out of the shadows

Contrast is a puzzle/platformer all about light and dark and the myriad of cool things you can do with both. 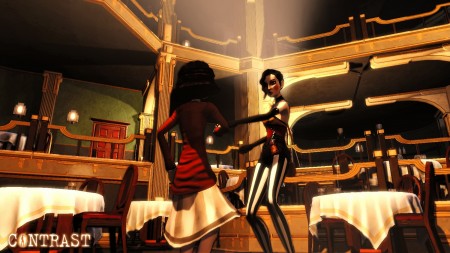 It’s a unique premise for a game, and with a ‘1920s circus theme’ Contrast is stunningly different than pretty much anything else out there- whatever the genre.

You play as two characters (that are actually one and the same) in Contrast with Didi, a young girl, and her imaginary friend Dawn. As Dawn, you’ll shed some much needed light on Didi’s tale. It’s a story that’s far from rosy and tasks players with navigating the world (and viewing it) with the understanding of a child. Cool stuff.

Expect to see Contrast emerge for the Xbox 360 and PC (which you can nab a discount on if you pre-order now) on November 15th and and on the PSN on the 19th.

Jason's been knee deep in videogames since he was but a lad. Cutting his teeth on the pixely glory that was the Atari 2600, he's been hack'n'slashing and shoot'em'uping ever since. Mainly an FPS and action guy, Jason enjoys the occasional well crafted title from every genre.
@jason_tas
Previous Feature Friday: Welcome to the Adult Zone, You’re Gonna Cry….
Next Deadfall heads to the Sahara in new trailer