EA’s newest in the Need for Speed line is set to be the only racer on the console at launch. 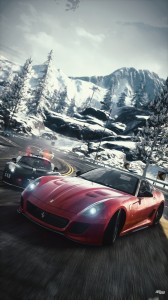 Need for Speed Rivals puts gamers behind the wheel of both sides of the law, daring them to cross the line as either a cop or racer in order to gain any advantage in the street’s ultimate rivalry. Players will choose between two distinct career experiences, each with their own set of high-stakes challenges, rewards, pursuit tech and cars. Powered by the advanced Frostbite 3 engine, the game features stunning visuals including epic vistas, super high-fidelity cars, time of day and weather effects. The intensity of the action is at an all-time high thanks to AllDrive, a revolutionary new way to experience Need for Speed where you and your friends are seamlessly connected in one racing world.

If you’ve been following our coverage of Need for Speed Rivals, then you already know it’s shaping up to be a winner with an actual story-mode that you just might want to play through and some stunning graphics- especially on the next-gen consoles. Racers are often some of the best ways to show off the power of a new rig and Rivals looks like it’s set to shine in that arena.

For the Sony PlayStation 4, Rivals will be only racing game available for the console’s launch too, a fact that early-adopting gamers shouldn’t exactly be upset over. Rivals not only looks great running on the PS4 (and the Xbox One for that matter), but it actually brings a bunch of new gameplay options to the table as well in the form of Pursuit Tech and AllDrive.

Need for Speed Rivals will be available on the PS4 right at launch (November 15th in the US) and will also be out for the Xbox One on November 22nd and the Xbox 360, PS3 and PC on November 19th in the US and on the 22nd in Europe.

Jason's been knee deep in videogames since he was but a lad. Cutting his teeth on the pixely glory that was the Atari 2600, he's been hack'n'slashing and shoot'em'uping ever since. Mainly an FPS and action guy, Jason enjoys the occasional well crafted title from every genre.
@jason_tas
Previous Capcom 30th Anniversary Character Encyclopedia (Book) Review
Next The Wolf Among Us – Episode 1: Faith (PC) Review