Home / News / The Typing of the Dead: Overkill stalks the PC today

The Typing of the Dead: Overkill stalks the PC today 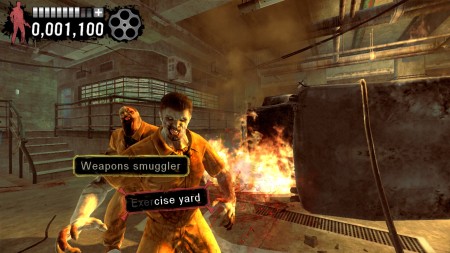 “People often gripe about how video games aren’t educational or useful in everyday life,” said Ollie Clark, Creative Director at Modern Dream. “But with The Typing of the Dead: OVERKILL you can now shoot up a carnival full of flesh eating mutant clowns while improving your typing and personal vocabulary. Happy Halloween!”

Overkill was one nutty game already and fans will be happy to know that all of the grindhouse flair from the gritty and tongue-in-cheek The House of the Dead spinoff is perfectly intact for The Typing of the Dead: Overkill. Actually, it might actually be funnier thanks to the laugh-worthy phrases and words that appear below the various zombies and monsters.

The rules in The Typing of the Dead are dead simple- instead of raising your light gun or controlling a crosshair from your controller, you’ll be typing in words and short phrases. Every letter you type blasts away at a zombie and puts the undead back in the ground. It’s a beyond novel premise that was a hit with the first The Typing of the Dead and looks even better this time around for the Overkill flavoring alone.

The Typing of the Dead: Overkill is available now on the PC from Sega and developer Modern Dream, it’ll cost you $19.99 USD.

Tags PC Sega The Typing of the Dead: Overkill

Jason's been knee deep in videogames since he was but a lad. Cutting his teeth on the pixely glory that was the Atari 2600, he's been hack'n'slashing and shoot'em'uping ever since. Mainly an FPS and action guy, Jason enjoys the occasional well crafted title from every genre.
@jason_tas
Previous Wii U continues to take a beating at retail
Next Valiant going big with 68k+ copies of Unity #1