Tactical team based combat, with some interesting mechanics. 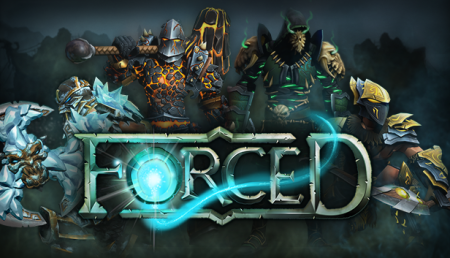 Anyone who’s played a game that is supposed to be team based will know that you often win in spite of a complete lack of apparent teamwork.  With Forced, being developed by Danish company BetaDwarf, communication and team work isn’t just a recommendation to succeed, it’s an absolute necessity.  Forced is a co-op action RPG.  The story is pretty straight forward.  You’re a slave who was chosen at birth and is forced to fight your way through a series of trials and monsters to earn your freedom.

Combat is pretty simple to pick up, and anyone who has played a dungeon game like Diablo or Torchlight should feel right at home here.  Forced has an interesting combat system called ‘Marks’.  When you hit an enemy, a mark appears above them, up to a maximum of 5.  When you have marks on your enemies, your special attacks have more effect.  The more marks you have, the more effective the special ability is.  There’s keyboard and mouse controls, or you can use a controller.  For me, the mouse and keyboard offered the most accuracy, and when you get swarmed with enemies in some of the trials, accuracy is an absolute necessity to survive.

The game consists of a variety of trials, placing you in an arena with a series of objectives that can involve tasks such as killing enemies, activating shrines and destroying statues.  Before you enter the arena to face your challenges, you can choose between one of four different classes of character to play as.  You have your classic types, such as the tank character who can take damage, a nippy rogue with twin daggers who can move around quickly, your hammer wielding class that does the big damage, or the ranger for taking foes out from a distance. 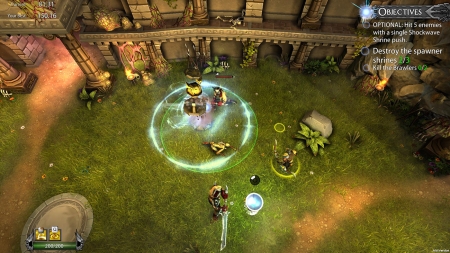 A major part of the game is your spirit Mentor, Balfus.  He has many abilities, including being able to move blocks around, or activating various shrines that do things such as heal you, activate shockwaves that knock enemies down or make Balfus become explosive, allowing you to blow things up.  The various puzzles you face along the way will require you to ensure your character and your spirit are in the right place.  You can call him to where you are presently standing, or call him over so he moves with you.  Mastering these abilities is essential.

Completing the trials earns you gems, which in turn allow you to unlock new abilities to use, and extra ability slots to fill.  Each trial has three gems to collect.  You get one for completing the trial, one for completing it within a set time, and one more for a secret challenge, the details of which are revealed to you once you complete the trial for the first time.  The good thing is, the games carry across all classes.  So if you choose to play as a different class in another trial, the gems carry over and you can pick the same level of abilities.  You also need a certain amount of gems to advance in the game, so you might be forced to revisit previous trials.

Once you’ve beaten all the trials in an area, a boss battle opens.  The boss battles are challenging, and really require you to make use of the new skills you picked up in the trials gone before.  There’s a lot going on, and you need to keep your wits about you in order to succeed. 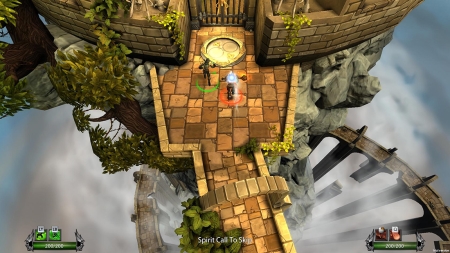 As well as the single player, of course, there is the tactical co-op mode that is the focus of the game.  In this, up to four players team up to take on the trials, and as you can expect, they are more difficult to complete and require teamwork.  Instead of every player getting their own spirit mentor, there is just one shared between all players, which can be called by anyone.  As a result, if you are to get anywhere in the co-op campaign, effective communication and tactics between team mates is an absolute must.  As you might expect, good teamwork leads to a fun and rewarding experience.  Poor team work will make everything an exercise in frustration, so you might want to get some friends involved.

FINAL THOUGHTS
Forced is a great title, whether you’re playing alone or with others.  While the game is being sold on it’s multiplayer merits, it’s worth picking up even if you’re playing alone, as the challenge is very different.  It looks pretty, and there’s enough variety in the classes, combat and objectives to keep things interesting.  If you want to try the co-op, I highly recommend getting friends involved, as getting poor team mates online can ruin the experience.  Overall, Forced is a fantastic tactical game, that will test your wits as well as your combat skills.  Highly recommended.

Mike is Brutal Gamer's Indie Editor. He has been playing video games since the early 90s and is fond of racing games, puzzlers and MMOs. Typing /played while in WoW makes him cry, but not enough to stop him playing some more.
@Ognawk
Previous Dead Rising 3 gameplay
Next Sonic Lost World US commercial 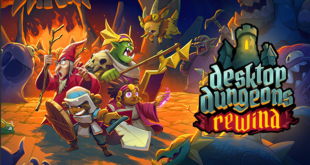 Out right now and playable during Next Fest, is the freshly launched demo for the …