Some of the biggest books of all time are about to get Artist’s Editions from IDW as Jack Kirby’s New Gods and Dave Gibbons classic Watchmen are getting some hefty collector’s edition tomes.

Produced under license from DC Entertainment (no, there’s nothing shady going on here) IDW will be producing some of their incredible Artist’s Edition books for these two absolute classic properties. There’s no denying how long-lasting and impactful New Gods has been on the DC Universe in genes (both pre and post-New 52) and Watchmen is a book that pretty much all comic fans venerate for not only it’s art and storytelling- but also its message. 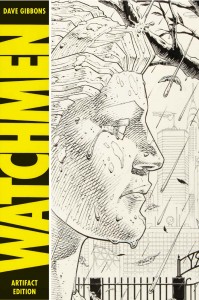 Jack Kirby’s New Gods Artist’s Edition will be released in March and feature five complete issues of Kirby’s inaugural Fourth World book. Kirby, often called the King of Comics, is arguably the most important and influential comics creator of all time. His work on New Gods, which he wrote as well as drew, clearly reinforces that notion. Filled with amazing imagery and giant concepts, this book will measure 12 x 17 inches.

Dave Gibbons’ Watchmen will debut later in the year. Watchmen, by Alan Moore and Dave Gibbons, is the story most often cited as the greatest graphic novel ever published. This Artist’s Edition will be atypical in that the stories will not be complete, and will be an Artifact Edition, the first released by IDW. It will be produced to the same exacting standards as an Artist’s Edition, and will feature a cornucopia of individual pages and covers from Watchmen, each image a testament to Gibbons’ elegant and nuanced style. This book will also measure 12 x 17 inches.

There are no release dates as of yet for either of the books, but we’ll have it for you as soon as they’re announced.

Jason's been knee deep in videogames since he was but a lad. Cutting his teeth on the pixely glory that was the Atari 2600, he's been hack'n'slashing and shoot'em'uping ever since. Mainly an FPS and action guy, Jason enjoys the occasional well crafted title from every genre.
@jason_tas
Previous Baldur’s Gate II Enhanced Edition screen-a-palooza released
Next NYCC: New Quantum and Woody mini-series on the way