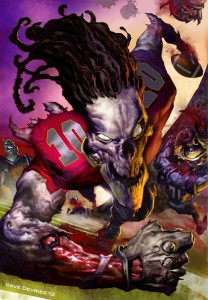 Mutant Football League is one of those games from the era of 16-bit that everybody has some great memories of. What’s not to like after all about mutants and monsters bashing each other apart while playing football? It’s so nuts that it’s great. And now it’s back… well, almost.

The game’s creator Michael Mendheim, has brought the title back to audiences for consideration on Kickstarter. The master of mutants hopes to secure the funds that he needs to move the title downfield via crowd-funding and get it added to Xbox Live, the Apple App Store and the Android Marketplace.

Originally released in 1993 for the Sega Genesis, Mendheim promises that this is indeed the Mutant Football League that you remember.

“It’s the 20th anniversary of the original game, so this is an ideal time to release a new over-the-top football game featuring monsters and mutants for the many fans who have been clamoring for it,” stated Mendheim. “The fans have kept their interest in this genre alive over the years and we want to reward them for their loyalty. We will be creating a new and very different game that pays homage to classic monster sports games and parodies the owners, the coaches, the sponsors and everything else that makes football such a great American sport.”

And it’s not just Mendheim working on Mutant Football League either. He’s put a pretty nice team of top shelf talent together for the project including folks who’ve worked on the Tony Hawk series, Call of Duty: Black Ops II Zombies and Spongebob Squarepants… oh, and did I mention Simon Bisley? 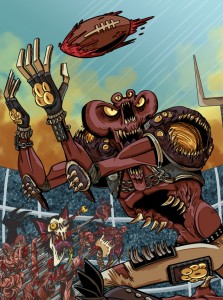 You can get to the Kickstarter page for the proposed game by clicking here. If you’re still not sure if you want to back the project, let me leave you with this handy dandy little highlight reel of a bullet-pointed list. I’m pretty sure that if the promise of making your own team of freaks doesn’t get you to pony up, then the fact that you can actually have a team of robots face off against a squad of undead will.

Jason's been knee deep in videogames since he was but a lad. Cutting his teeth on the pixely glory that was the Atari 2600, he's been hack'n'slashing and shoot'em'uping ever since. Mainly an FPS and action guy, Jason enjoys the occasional well crafted title from every genre.
@jason_tas
Previous The Bureau: XCOM Declassified (Xbox 360) Review
Next Star Wars Pinball flips out onto the Nintendo eShop tomorrow