Our own review for Rockstar’s current-gen opus will be up sometime very soon, but in the meantime GamesRadar has shared their praise-filed look at Grand Theft Auto V with us. The verdict? If it’s even half as good as GR’s review says, then GTA5 just might be a lock for game of the year. 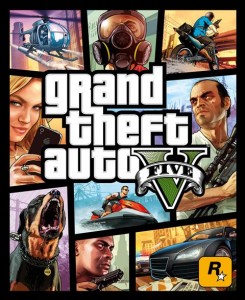 “At times the staggering amount of content can be overwhelming.”

That’s just a bit of what GamesRadar’s review gets into with Rockstar Games’ Grand Theft Auto 5. The game, which sees release today for the Xbox 360 and PS3, is already getting perfect or near-perfect scores from outlets across the board and from the review in question says about it, it’s easy to see why.

Not only does GTA5 look to be the biggest and most complex Grand Theft Auto to ever see release, but it seems like the best realized in terms of story as well. Story has always been something that GTA, as a series, has struggled with as gamers tended to get in the habit of simply exploring the worlds that Rockstar created instead of following the narrative to its conclusion. There’s certainly something to be said about that in and of itself, but as a gamer that likes a good storyline above all else I’m more than a little pleased to see this GTA has some story-backbone that’ll seriously hold attention.

The three main characters and how they interact, especially with you having to switch between the three on the fly during missions, sounds pretty fantastic too.

I absolutely loved the experience that was Grand Theft Auto IV and GTA5 is looking like it’s every bit as good, if not better, than Rockstar’s last grand release. Have a look at GamesRadar’s review here and then check back here in a few days to read our take on the game that many are already calling the Game of the Year.

Jason's been knee deep in videogames since he was but a lad. Cutting his teeth on the pixely glory that was the Atari 2600, he's been hack'n'slashing and shoot'em'uping ever since. Mainly an FPS and action guy, Jason enjoys the occasional well crafted title from every genre.
@jason_tas
Previous Star Wars Pinball flips out onto the Nintendo eShop tomorrow
Next Need for Speed Rivals gets personal