General Redacted (yup) leads his “500 Shades of Greys” into battle and towards total domination of the Faraway. 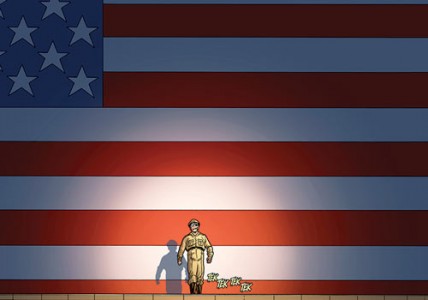 If General Redacted wins the Faraway, he’ll use its centuries-old secrets to stamp out the heathen collectivist Bolsheviks of modern day America. Now, it’s down to Archer, Armstrong, and Mary-Maria, Archer’s assassin stepsister/love interest (ew), to run the greatest infiltration/liberation/inebriation mission mankind has ever known. Which would be a cakewalk if its wasn’t for all the trigger-happy UFOs, hostile natives and, of course, the dinosaurs… Yep, they could definitely do without all those dinosaurs.

Archer & Armstrong really does throw everything at you as a reader, and that’s a fact that’s only going to get truer as The Sect Civil War starts up; throwing every bad guy group you can imagine up against one another. Before that though, there’s the Faraway business to take care of. And that might be kind of tough with aliens and dinosaurs running rampant- all with their sights set on Archer and Armstrong.

The creative team of Fred Van Lente and Pere Perez bring you one knock down drag out to end ’em all… till the next one anyway. Expect to see it land on shelves this week, on August 14th.

Jason's been knee deep in videogames since he was but a lad. Cutting his teeth on the pixely glory that was the Atari 2600, he's been hack'n'slashing and shoot'em'uping ever since. Mainly an FPS and action guy, Jason enjoys the occasional well crafted title from every genre.
@jason_tas
Previous Assassin’s Creed IV: Black Flag UK special edition unearthed
Next Apocalypse ends the season of DLC in Black Ops 2