SDCC: The convention center gets apocalyptic courtesy of Oblivion

See what the San Diego Convention Center (home of the SDCC) looks like in the post-apocalyptic world of Oblivion. 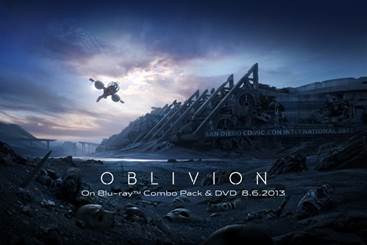 The film, which debuted earlier this year in theaters, shows a completely demolished Earth in the wake of an alien invasion. Not that I’m going to spoil any of them for you here, but there’s twists and turns galore in the movie in which Tom Cruise and Morgan Freeman star. The film also features the art design of one Andree Wallin.

As a very cool bonus, Wallin also designed a special item for fans who’ll be attending the SDCC this week in the form of an image of a San Diego Convention Center that’s been left as a shell of its former self, post-invasion. The illustration will be featured on a special limited edition show bag that’ll be given out at the Geek magazine booth (#4014) on the show floor. In order to get the bag, you’ll need a ‘code word’ that’ll be given out on Geek’s Twitter feed (more info here) and you’ll also have to show up early to the booth as we’re not kidding when we say this baby is going to be ‘limited’.

The whole promo is to celebrate the arrival of Oblivion on digital formats this July the 23rd and on Blu Ray on August 6th. So get the bag at the Con and add the movie to your collection not too far after that.

Here’s what you can expect to find in the box if you’re buying in for the Blu Ray version of the film: 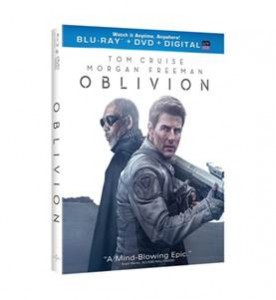 The Blu-ray™ Combo Pack allows fans to view Oblivion anytime, anywhere on the platform of their choice. It includes a Blu-ray™ disc, a DVD, and Digital including UltraViolet™ for the ultimate, complete viewing experience.

· Blu-ray™ disc unleashes the power of your HDTV and is the best way to watch movies at home, featuring perfect hi-def picture and hi-def sound.

· DVD offers the flexibility and convenience of playing movies in more places, both at home and away.

· UltraViolet™ is a revolutionary new way for fans to collect their movies and TV shows in the cloud. UltraViolet™ lets consumers instantly stream and download to tablets, smartphones, computers and TVs, including iPad®, iPhone®, Android™ and more.

Bonus Features on Blu-rayTM and DVD

o Destiny – Looks inside the conceptualization, development and pre-production of Oblivion and the planning that went into the Herculean task of shooting the epic film.

o Voyage – Follows the creation of the amazing Bubble Ship from its early design conception to its journey around the world. (Blu-rayTM exclusive)

o Combat – Explores the film’s ground-breaking action and death-defying stunts, all performed by one of the most popular movie stars in the world. (Blu-rayTM exclusive)

o Harmony – Delves into the innovative musical world of M83.

Jason's been knee deep in videogames since he was but a lad. Cutting his teeth on the pixely glory that was the Atari 2600, he's been hack'n'slashing and shoot'em'uping ever since. Mainly an FPS and action guy, Jason enjoys the occasional well crafted title from every genre.
@jason_tas
Previous SDCC: IDW releases Comic Con schedule
Next SDCC: comiXology ‘Takes Comics Further’