The Cartoon Network’s Adult Swim block of programming will have a major spot at Comic Con this year with the debut of the amazing Adult Swim Funhouse and one big pile of panels. 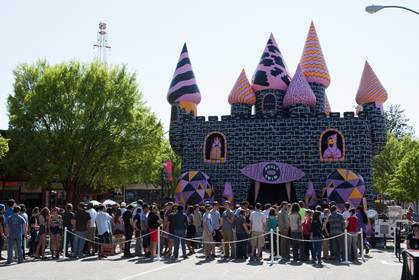 So how does 10 rooms of Adult Swim sound? If you answered ‘insane’, then you’re on target. The CN has plans to erect a giant (possibly magical) castle right smack dab in the middle of PetCo Park’s parking lot. The castle will be free to enter, all you need do is line up at 4pm to get your complimentary ticket.

The castle officially opens at 5pm for entry and stays open till 10pm each night from Thursday the 18th until Saturday the 20th. Once inside fans will find that there’s more to this exhibit than just a bunch of replicas to gawk at too, as you’ll find multiple paths through to the exit as well room ‘challenges’ that you’ll need to complete. These rooms will have you crawling, dancing and singing (yes, singing) to proceed.

Crazy? Sure, but that’s kind of Adult Swim in a nutshell isn’t it?

As far as panels go, there are plenty of them to visit planned. There are no times as of yet, but here’s the dates and info about them to get you started:

The Heart, She Holler

The creators and stars of Adult Swim’s epic TV event, The Heart, She Holler, will explain it all at this panel. Executive producers John Lee (Xavier: Renegade Angel, Wonder Showzen), and Alyson Levy (Xavier: Renegade Angel, Wonder Showzen) will be joined by cast members Patton Oswalt (United States of Tara, Ratatouille), Amy Sedaris (Strangers with Candy) and Heather Lawless (The Campaign). The panel will be moderated by Kristen Schaal (Bob’s Burgers, 30 Rock).

Show creators Jackson Publick and Doc Hammer will discuss the original series, now in its fifth season, and answer fan questions. They will be joined by the voice of Brock Samson, Patrick Warburton (Seinfeld, The Tick).

Come watch a sneak peek of Childrens Hospital season 5 and hear from the show’s creative team, led by creator and star Rob Corddry (Hot Tub Time Machine, The Daily Show with Jon Stewart), executive producer Jonathan Stern (Burning Love, Newsreaders) and executive producer David Wain (The State, Wanderlust). They will be joined by members of the show’s ensemble cast of comedic heavyweights, including Lake Bell (How to Make It in America), Erinn Hayes (Parenthood), Ken Marino (Party Down, The State) and Rob Huebel (Human Giant, The Descendants).

Premiering this winter, Rick and Morty is a show about a sociopathic scientist who drags his unintelligent grandson on insanely dangerous adventures across the universe. Executive producers Dan Harmon (Community, Channel 101) and Justin Roiland (Channel 101) will preview the new animated series, and will be joined by writer Ryan Ridley and cast members Spencer Grammer (Greek) and voice actress Kari Wahlgren. The panel will be moderated by Rob Schrab (The Mindy Project, SCUD).

Jason's been knee deep in videogames since he was but a lad. Cutting his teeth on the pixely glory that was the Atari 2600, he's been hack'n'slashing and shoot'em'uping ever since. Mainly an FPS and action guy, Jason enjoys the occasional well crafted title from every genre.
@jason_tas
Previous Divinity: Dragon Commander gets Imperial Edition
Next SDCC: Cartoon Network announces Adventure Time and Regular Show panels