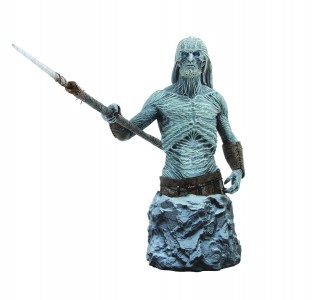 White Walkers, or the Others, are a fierce mythological race who are seldom seen as they lurk and prey in their land in the frozen north of Westeros. The Wall was constructed ages ago to keep them isolated. This evil creature speaks in cracked tones and brandishes a deadly icy weapon, as immortalized in this beautiful collectible piece.

When you talk about premier television, you’re probably talking Game of Thrones. The HBO series has done nothing less than run away with the imagination and adoration of its viewers since arriving on cable three years ago. George R.R. Martin’s dark fantasy masterpiece still has a ways to go storywise (keep writing George), but one of the biggest threats the land of Westeros has ever faced has already left its mark.

The White Walkers and the legion of the dead that they command are on the march, and with precious little standing in their way, their march towards the southern lands looms large over the upcoming season four. They’re poised to be a major force in the Game of Thrones series and now fans can add one to their collection shelf or desktop with the White Walker bust from Dark Horse Deluxe.

Captured from the creature’s first full on appearance in the capper of season two of the show, this is one piece that definitely commands attention, if not an army of zombies.

“The first appearance of the White Walker was the climax of the show’s second season,” Dark Horse’s David Scroggy recalled. “We thought that would be a perfect image to seize. We used exotic resins to simulate his ice spear, and will also re-create the striking blue luminosity of his piercing eyes. Game of Thrones is one of the best television sagas ever, and we owe it to the audience to capture every detail. Hopefully, we’ve succeeded.”

Oh, I’d say you have. You can expect to see this bad boy arriving at finer comic shops, bookstores, and specialty retailers (fittingly) on December 18- just before the winter’s frost really sets in. Each one will be packed in a full color box with a certificate of authenticity (that’ll be numbered). He’ll cost you $124.99 USD.

Jason's been knee deep in videogames since he was but a lad. Cutting his teeth on the pixely glory that was the Atari 2600, he's been hack'n'slashing and shoot'em'uping ever since. Mainly an FPS and action guy, Jason enjoys the occasional well crafted title from every genre.
@jason_tas
Previous Dark Horse Deluxe is getting Grimm
Next X-O Manowar #14 (comics) Preview