Summer of Valiant: Road to Unity

Summer of Valiant take 2? With the lineup the publisher is flaunting, it sure looks that way. 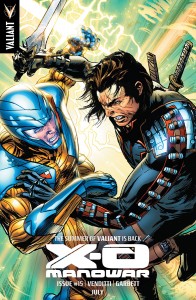 Yesterday, Valiant Comics talked up the upcoming (re) debut of Quantum & Woody and today is all about one massive clash of the titans. Just what the possible storyline might be about and who might be involved from Valiant’s stable of characters is still something of a mystery, but if the teaser image is anything to go by- this is going to be something fans won’t want to miss out on.

X-O Manowar is one of the most savage (and powerful) heroes in any comic book universe and the Eternal Warrior is no slouch either. Valiant teased at a new ongoing for Armstrong’s (of Archer &… fame) brother in their recently released Free Comic Book Day offering and a crossover with one of Valiant’s premier comics would be quite the opening storyarc for it.

Jason's been knee deep in videogames since he was but a lad. Cutting his teeth on the pixely glory that was the Atari 2600, he's been hack'n'slashing and shoot'em'uping ever since. Mainly an FPS and action guy, Jason enjoys the occasional well crafted title from every genre.
@jason_tas
Previous New Injustice DLC arrives today
Next Star Wars Pinball to be standalone on PSN