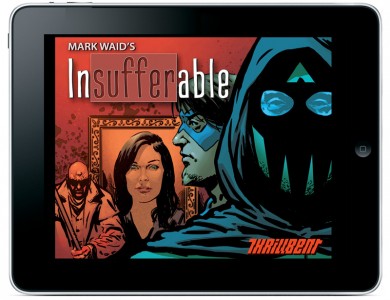 To celebrate the new partnership between the two companies, Thrillbent is re-releasing it’s popular Insufferable series from creator Peter Krause. The book follows an estranged superhero father and son who have to reunite to tackle a big case.

I haven’t read Insufferable, but it sounds like it might be a lot of fun. Even if you have read the comic though, you still might be interested in the re-issue since there’ll be all new bonus material and it’ll be presented in a brand new HD format.

“Mark Waid is one of the premier comic creators of our time and it’s an honor to feature Thrillbent across the entire comiXology platform,” says comiXology co-founder and CEO David Steinberger, “Waid made waves when he announced his digital-only line of comics and it’s only natural for us to give the Thrillbent line the comiXology Guided View experience and global reach.”

“When we launched Thrillbent.com, our goal was to get expertly crafted creator-owned comics in the hands of readers worldwide, and we see comiXology as the perfect avenue to help reach that goal,” said Thrillbent co-founder Mark Waid. “Thrillbent’s unique style of comics storytelling is a great fit to comiXology’s Guided View, and I know fans everywhere will be astonished by the digital comics evolution both companies are spearheading. You’ve never seen anything like what we can do together.” 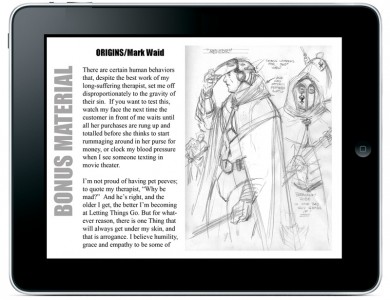 Sounds like some great stuff and Waid’s been in the comic industry for a long, long time. The guy knows comics and personally, I can’t wait to see what Insufferable is all about. If you can’t either, you can just mosey on over to the comiXology page for the newly hosted series right here.

Jason's been knee deep in videogames since he was but a lad. Cutting his teeth on the pixely glory that was the Atari 2600, he's been hack'n'slashing and shoot'em'uping ever since. Mainly an FPS and action guy, Jason enjoys the occasional well crafted title from every genre.
@jason_tas
Previous 7 Wonders of Crysis 3 Episode 2 arrives in the rail yard
Next Sonic the Fighters (XBLA) Review