Have you ever wanted to punch Sonic in the face? Now you can with Sonic the Fighters! 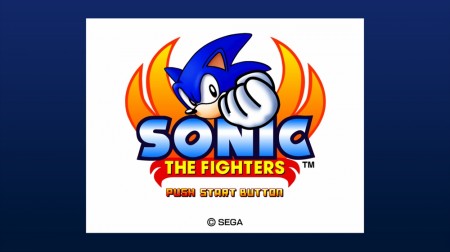 In North America, Sonic the Fighters was only ever released for the Nintendo GameCube. Europeans and Japanese markets received both PlayStation 2 and GameCube titles. Until November of 2012, if you lived in any of these parts of the world, those were the only ways you were able to play the 2005 fighting game… that is until now.

Sega re-released Sonic the Fighters at the end of November, as a downloadable title for the PlayStation Network and Xbox Live Arcade. While having never played the original, the Xbox Live Arcade version appears to be an up-rezed, HD version of the original. It looks nice, but it also looks dated.

At the character select screen you can choose from popular 2005 Sonic Characters like Sonic, Tales… some wolf-looking guy, Donald Duck-with a ‘tude guy, baseball-cap wearing dog, some narwhal-like horned character… Amy, and Knuckles. (Apparently, I need to brush up on my turn of the millennium Sonic the Hedgehog knowledge.)

Also included in this release are Honey the Cat, Metal Sonic, and Dr. Robotnik.

In addition to some really easy-to-earn Achievements (and I’m assuming Trophies for the PSN crowd), this re-release of Sonic the Fighters also includes an online mode where you and other like-minded Sonic fighting game enthusiasts can go blow-to-blow with each other. 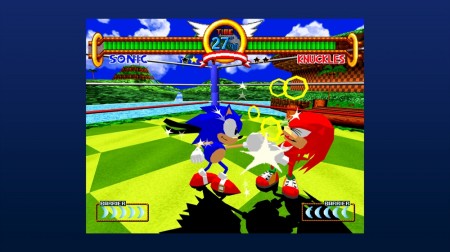 The controls are pretty simple. They feel stiff and seriously outdated. I was able to win a majority of the matches by button-mashing, and to be quite honest, outside of racking up a ton of achievements in a matter of minutes, I was left feeling rather unimpressed.

I went to the Internet to see what kind of reception Sonic the Fighters received back in 2005, and from what I found, it didn’t really impress the gaming media then, either.

Sonic the Fighters is available for 400 Microsoft Points ($5 USD), which is typically the lowest price that games on the Xbox Live Marketplace go for. While I didn’t hate Sonic the Fighters, I don’t recommend paying for it, either.

I can see Sonic the Fighters as being an attractive item for the hardcore Sega and/or Sonic the Hedgehog enthusiasts and collectors. Rather than needing to own a GameCube or PlayStation 2 that will play the original disc-based version, fans can now download it quickly and easily for their Xbox 360 or PlayStation 3 console that looks acceptable on an HDTV, and offers online play.

Sonic the Fighters is a rare Sega release that puts old (and obscure?) Sonic characters in a Virtua Fighter style fighting game.

The controls are stiff, the gameplay is simple, and overall the it just feels old.

Because of its rarity, this type of game will appeal to only the most hardcore of Sega and Sonic fanatics, and is available to download through the Xbox Live Marketplace and PlayStation Network for very cheap.

Troy is the Features Editor at Brutal Gamer. When he's not writing about or playing video games, he's enjoying life with his wife and children. He also loves coffee. And lots of it.
Previous Thrillbent Comics now featured on comiXology
Next Funimation is Optimum