Wizards of the Coast brings a great gift idea for the miniatures, board game, and trading card fans in your life, just in time for the holidays. 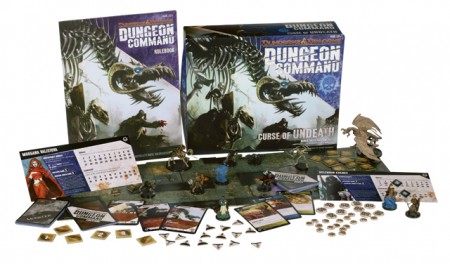 Dungeon Command is a miniatures skirmish game from Wizards of the Coast. New this year, it features various factions, which can be used as a whole in battles against other factions, or split to play a two player version with a single faction. As a bonus, you are also able to use the creatures and tiles in your other Dungeons & Dragons table top games. Today, we’ll be looking at the latest faction, Curse of Undeath, but we’ll also give an overview of Dungeon Command itself, for those readers who are unfamiliar with the game.

So what’s in the box? As you open it up, you are greeted with a large rule book with detailed instructions (that should clear up any side skirmishes about house rules), four large puzzle type pieces that form the board, a deck containing Order, Creature, and Monster cards, a sheet of various tokens that will help you keep track of things during play, and the set of miniatures. Everything is of very sturdy quality that should stand up to the test of time (even the box is made from a thin plastic that should keep everything straight for years to come). By far, though, the coolest part is the miniatures. Most of them are under two inches tall, but there is one larger piece that is significantly more than that.

The miniatures, tiny though they may be, are very well detailed. They are very dark in color and look (as a Curse of Undeath set should be), and are marked on the bottom with the names of their characters. There is a pretty good mix of levels and types, with Undead being prominent, obviously. They range from the high level Drocolich to low level zombies that can be resurrected from the dead (cool!). These miniatures are made of plastic, and should hold up fine for the average adult player. However, many of the pieces hold thin plastic weapons  like swords and spears, which will likely break off easily if mishandled. This is one board game you’ll likely want to keep out of your kids’ reach. Fair warning though, they will likely beg to play with them. In fact, as I opened the game, my eight year old was immediately coveting each and every piece in the box.

If you haven’t played any previous D&D or similar games, the instructions alone may be enough to intimidate you. Fear not, once you get started, the game itself is quite detailed, but not too hard to learn. The book has very thorough instructions that will explain nearly every outcome, so you really only need to read a bit more if you get confused. There are even separate tips on playing two full factions against each other and playing with a split faction, to clear up any possible confusions. I suggest giving the book a quick read through, and then jumping right in.

The gameplay itself starts with each player adding a number of tiles to build the board (the number varies based on if you are playing split or full factions). Where the tiles are placed matters, as there are walls, difficult terrain, and various obstacles that need to be moved around, and where your starting tile is located in relation to these can make a big difference to your strategy. Each player chooses their commander (there are two included in each faction), and draws a number of Order and Creature cards based on the starting numbers on their commander card.

The next step is to deploy creatures. You’ll have a number of creature cards in your hand, and you can place as many of those as you like onto your starting tile. To do this, simply choose a creature card, find the corresponding miniature, and place it on any square. Each of the creatures has a level in the upper corner of the card (obviously, the higher the level, the stronger the creature). The levels of all currently deployed creatures cannot be higher than your commander’s leadership level, but other than that you are free to place them in any order or number you like.

Now it’s time for battle (Yay!). To start their turn, players draw an order card. These are special cards, that can do everything from attach to a creature to provide an ongoing effect, to deflecting a single attack. You can then move your creatures around the board (each creature can move up to the speed listed on their card), and attack your enemies. Attacking is a pretty standard setup, for the most part. Move next to an opponent, and attack with the force listed on your card. This is where it gets a bit interesting though. Once you attack, your opponent will have the opportunity to react to your attack, and may even end up canceling out what you’ve done. Strategy is huge in Dungeon Command, and that will keep many a rabid strategy fan coming back for more.

After moving and attacking, you’ll get another chance to deploy creatures, and you get to raise your commander’s leadership score by one, meaning you can deploy a higher level as you advance in the game. Then, your opponent takes their turn, and you’ll continue basically in this way through the game. A player loses the game by either having no creatures left on the board, or a commander with a morale level of zero. Morale level is affected by things like losing a creature, treasure, and special effects. It seems like a lot to keep track of (and it is), but once you get the hang of it, Dungeon Command is a pretty gripping game. Plus, all those little tokens really do a great job of keeping everything straight.

Dungeon Command: Curse of Undeath may take a little work initially to learn the ins and outs, but it is a really good quality game that provides a ton of strategy, very cool miniatures, and the opportunity to trounce your friends and family soundly – and what more could anyone want this holiday season? It is the perfect gift for strategy fans, Dungeons & Dragons addicts, and anyone who loves a good board game.

U.S. Senior Editor/Deputy EIC at BrutalGamer, mother of 5, gamer, reader, wife to @MacAnthony, and all-around bad-ass (no, not really)
Previous eBid presents the Most Amazing Attic Finds of 2012
Next Rock out with your Claus out- free through Christmas 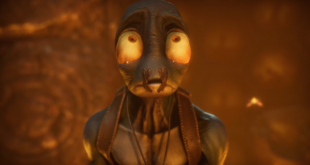