The family friendly trading card game gets its first expansion. 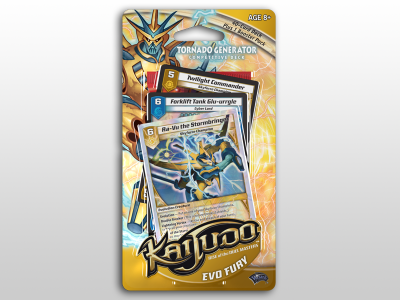 Kaijudo: Rise of the Duelmasters is, for the uninitiated, the makings of a new trading card game dynasty. With a tie-in television show, online battle game, online trading card game, and of course, a new line of trading cards, it has everything you need to immerse yourself in a new obsession. Since it’s launch this summer, it has grown in popularity, sure, but can it stand the test of time?

If a game is going to have staying power, there has to be a certain amount of new blood added into the system to keep the ball rolling. Expansion sets are a great way to add new abilities and characters to an established game, and Kaijudo finally has its first real expansion with the new Evo Fury set. Evo Fury features a brand new competitive deck, Tornado Generator, as well as nine card booster packs for some quick deck growth. The coolest feature of this new deck is the ability to use evolution, which we’ll talk about more a bit later in the review.

For those unfamiliar with Kaijudo, now is a great time to get into the game. It’s still fairly new to the trading card game world, so you don’t have to worry too much about a steep learning curve at local (or online games). To give a basic overview, you have three zones (shield, mana, and battle) on your playmat (a playmat and instructions are included in each deck).  At the beginning of the game, you and your opponent each lay five unseen cards onto your respective shield zones, with the goal being to knock out all of the opponent’s shields, thereby winning the game. As far as card games go, it’s fairly easy to pick up and accessible even for kids and TCG newbies, yet there is a depth to the gameplay once you get to know your cards and opponents that will keep pulling you back.

The new Tornado Generator deck comes complete with forty cards, including one each of super rare and very rare cards. These are, of course, the coveted ones, both for their awesome creatures and cool aesthetics. Both Forklift Tank Glu-urrgle and Ra-Vu the Stormbringer have a shiny foil pattern design across the face of their well drawn creature iamges, and both pack a pretty good punch, coming in at 4000 and 11000 damage respectively.

The deck is worth it just to add those two cards to your arsenal, but you’ll also get a pretty good mix of low and high value cards, including a total of four Evolution creatures. The Evolution cards add another dimension to the gameplay, as they can be combined with existing creatures to create an even more powerful force on the field (not to mention they can be played on the same turn they are summoned, very handy indeed). While they are undeniably powerful they can’t be used on their own, and once combined with a card they cannot be separated, so there is a lot of strategy involved in using them.

Ra-Vu the Stormbringer is an Evolution Creature that can be combined with Skyforce Champions. Ra-Vu needs 6 mana to be played, but you get a lot of bang for your buck. He is a double breaker (meaning he can break two shields), and on top of that, he both untaps all of your creatures and gives them blocker as well. This can definitely be a game changing card. The other three Evolution cards combine with Cyber Lords (of which you get quite a few in this deck) to give you double breaker. They are not quite as cool as Ra-Vu, but they only use four mana, making them a bit easier to bring into play.

Kaijudo – Evo Fury is an expansion that truly brings something new to the table. The ability to use evolution can completely change the way you play, and definitely gives players an edge up -even in a game that seems stacked against them.

U.S. Senior Editor/Deputy EIC at BrutalGamer, mother of 5, gamer, reader, wife to @MacAnthony, and all-around bad-ass (no, not really)
Previous So an X-Man and KITT pull into a comic shop…
Next Spartacus marches on Rome this January