The Chief returns in 343 Industries’ first installment of the Halo series.

After Bungie signed the franchise over to 343 and Microsoft, fans drew a sharp intake of breath as they feared for their beloved Halo series. There were mixed views about  Halo: Reach. But, when Halo 4 got flashed at us like a crude man in the park at E3. Halo was back on the lips of fans again- the Chief was back. 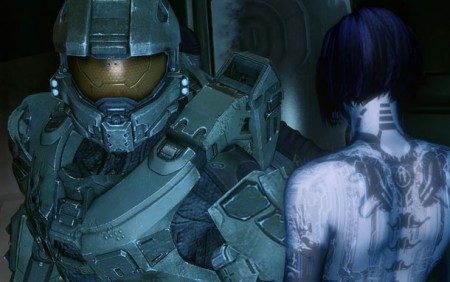 The E3 footage of Halo 4 was mind blowing, yet nothing could have prepared me for what was in store for the game. Halo 4 comes with the typical incredible storyline, mind blowing scenery, and insanely realistic FMV’s. And that chilled out (yet extremely dramatic) sound track that we have come to expect in Halo games has been multiplied.

Everything has been stepped up, the story line is more epic than ever, the scenery is even more incredible, the cut-scenes I found hard to differentiate between live action and CGI at times and an amazing soundtrack.

Set 4 years after the HALO event (I assume that HALO 3, right?), the Forward Unto Dawn (the ship that John ‘117’ aka Master Chief was on) is a complete wreck floating around space… Is anyone alive? Cortana is! And so is the Chief! 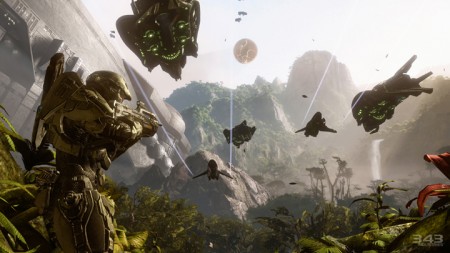 After waking up and releasing yourself from the cryo-chamber, you seek to find out what has happened to the stricken Dawn.  Turns out there are a lot of dangers on a broken-down UNSC craft; things like depressurized lift shafts… and Covenant! So much for the truce then? Well, as Cortana says “a lot can happen in 4 years.”

After fighting off small pockets of Covenant aboard the Dawn, you open the blast shield to reveal that you’ve floated into an entire Covenant fleet who then feel the need to board The Dawn and ‘kick off’. Happy days! While fighting these Covies off, you’ll notice little changes from previous Halo titles.

One of the first things I noticed was that the grunts have had a slight make over and no longer speak English, they now have their own dialect! It’s actually quite nice, as the old voice’s got bloody annoying as the games progressed.

After fighting off the Covenant on board, you’re told that you have to then blow up an enemy ship using an on-board missile. It’s kind of like the equivalent of a space tomahawk….on doing that The Dawn is then ripped to shreds and you get sucked down to a nearby orbiting planet.  … did I mention that’s just the first five or ten minutes of the game? And it gets a lot better too. 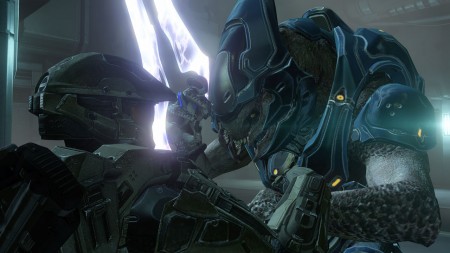 The combat has remained the same throughout the series and Halo 4 sticks to it; the buttons are the same as they’ve always have been, or at least I think they’ve always been the same… I can never remember the layout for halo games, but it all comes back to me pretty quick. (Which leads me to believe they’ve changed somewhere down the line.)

(Warning- a very minor spoiler here, skip to the next paragraph if you don’t want to know any more about the storyline – ed) Thankfully, 343 have cut the flood out of their games, which is a god send! It shows they’ve really listened to the fans in not putting the horrid things in Halo 4. Later on in the game, you are welcomed by a new enemy though- the Promethean Knight. These can prove quite a task to kill while playing on Legendary on your own. I’m sure they’re still a bit of a bugger to kill on any other difficulty too.

In spite of all my praise, I do have one small issue with Halo 4 as it follows the Halo blueprint a little too well for my liking. Here was a perfect chance to give the fans something new and fresh, but I feel 343 played it safe, which is a bit of a let-down. But why fix something that isn’t broken I guess.

The Multiplayer is the same as it’s always been – utterly brilliant and really good fun, while being insanely competitive! The new maps are completely awesome, along with the new weapons and the little ‘care package’ after getting a certain amount of xp in a game that supplies you with new weapons, armour upgrades or a little damage or speed boost comes as a nice touch to the game. 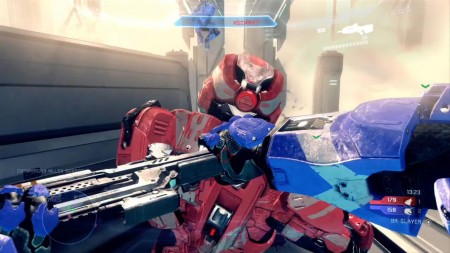 I’ve not really had a chance to play about with the Forge yet, but I assume that’s the same as it’s always been.

There are also new game modes called ‘Spartan-ops’. They’re a bit like the Spec-ops from Call of Duty but come with an ‘episode’ on completion…the episodes are updated weekly  (for free) and add to the whole Halo storyline.

With that, I would also really like to mention the way that 343 incorporated the ‘Forward Unto Dawn’ mini-series in with the game and vice versa! The fans have been dying for something like that since the live action adverts for Reach hit our screens. There has been a lot of thought gone into Halo 4, as well as the back story of some of the ‘cameo’ characters such as Lasky. Believe me, the fans really appreciate it.

Halo 4 isn’t just a must get for all Halo fans, it’s a must get for all gamers. Any halo fans that are sitting on the fence about getting this title shouldn’t be worried! Halo 4 is truly magnificent and is everything that a Halo fan expects from a Halo game.

Even though I’d be really surprised if anything beats it for GOTY this year, Halo 4 does stay true to its predecessors and for me that’s where the only problem lies. For me the game is brilliantly made, but a bit too samey. As I said though, why fix something that isn’t broken? There is plenty to do in Halo 4, with the multiplayer, forge and the added Spartan-ops game mode.