The Walking Dead lurches towards retail

Telltale’s excellent adventure game take on The Walking Dead will be getting the full retail treatment in early December- complete with a Collectors Edition.

If you’ve been playing the game in it’s episodic form, then you already know what it’s all about (and why it’s so darned amazing). If you haven’t, here’s what you can look forward to if you grab the retail box when it hits shelves.

The world we knew is gone. The dead have risen to feed on the living. The living cannot be trusted.

Starving. Never safe. Looking for hope. What would you do?

The Walking Dead is a critically-acclaimed adventure horror game set in Robert Kirkman’s award-winning universe.  Beginning when Deputy Sheriff Rick Grimes is still in a coma, this is a new story telling the tale of Lee Everett – a man given a second chance at life in a world of the undead.

Taking an orphaned girl named Clementine under his wing, Lee must deal with true horror under the constant threat of walkers hungry for flesh… as well as other survivors, desperate enough to do anything to stay alive.

Yes, to answer you’re question, it’s every bit as good as it sounds in that press release snippet. As for the Collectors Edition, you won’t find any statues or other ‘collectibles’, but you will find a special edition of the The Walking Dead Compendium.

The special edition tome contains the first 48 issues of the comic book and will not be sold separately (though there is a version of the book that’s been out for a little while now, hard as it is to get ahold of). It’s also a $59.99 value all by itself, a fact that becomes even more relevant when you consider that the  entire Collectors Edition package will only run you $69.99 USD. Not bad at all if you’re a big Dead fan. 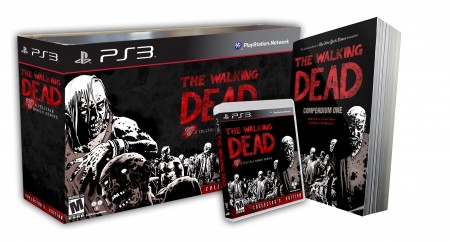 Look for the standard editions of The Walking Dead on store shelves for the Xbox 360 and PS3 on December 4th. They’ll be joined by the Collectors Edition of the game, which will be available exclusively at GameStop stores. 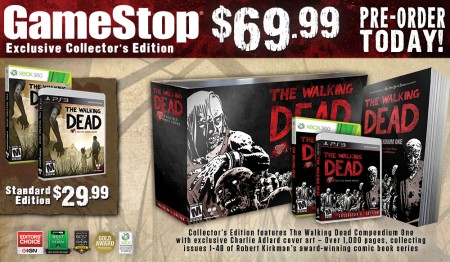 And if you’ve been paying episodically- don’t forget that episode 5 ‘No Time Left’ will be out before the boxed editions. Though there’s no firm date yet, you can expect to see that one added to Xbox Live, the PSN, and Steam sometime (probably at the end of…) next month.

Jason's been knee deep in videogames since he was but a lad. Cutting his teeth on the pixely glory that was the Atari 2600, he's been hack'n'slashing and shoot'em'uping ever since. Mainly an FPS and action guy, Jason enjoys the occasional well crafted title from every genre.
@jason_tas
Previous What’s new in Skylanders Giants?
Next Vigil Games Co-Founder Leaves The Company