The Walking Dead: Episode 4 – “Around Every Corner” (PS3) Review

Telltale Games continues to impress in the climactic The Walking Dead: Episode 4 – Around Every Corner! 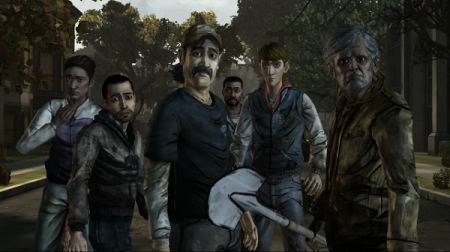 If you had given me, at the beginning of this year, a list of all of the 2012 video games releases, and asked me to guess what would be my Game of the Year, I wouldn’t have guessed in a million years that The Walking Dead would be a strong contender.

As of right now, the zombie apocalypse-themed, serialized, adventure game is topping my list, and for good reason — it’s amazing!

Much like the episodes before it, The Walking Dead: Episode 4 – Around Every Corner, is excellently-paced and expertly-written. Each episode relatively short and typically takes no more than 3 hours to complete, but I found myself hooked on each and every moment. Like a good book, The Walking Dead is hard to put down! Only once did I not playing through an episode from start to finish in one sitting. In fact, I’m bleary eyed as I write this review simply because I stayed up way too late because I had to know what happened next! (Don’t worry, I’ll be okay – I have a huge cup of coffee next to me.) 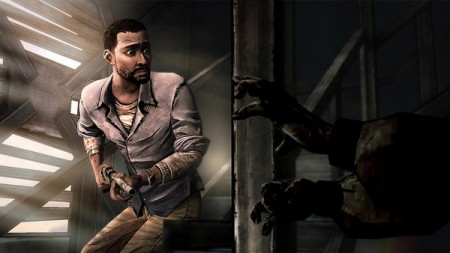 I won’t give away any spoilers of what to expect in Episode 4, but know this, if you’ve enjoyed the previous three and some of their surprises, your in for a really special treat!

Even though the world of The Walking Dead has gone to hell, where hordes of brain-eating zombies are ready to feast on the survivors, the biggest threat and the scariest monster is humanity. Episode 4 reminds you of this, and I think you’ll really enjoy learning about and visiting Crawford. That’s all I’m going to say.

Like the past episodes, you will find yourself making decisions that will often affect the way members of your group will react to you. On occasional you’ll be forced to make a choice (quickly!) that may determine whether or not a player lives or dies. While Episode 4 didn’t make me misty-eyed like the previous episode did, it’s still emotionally charged, with a lot of long and deliberate shot that really draw you into the grim, and often sad, situation.

The puzzles are challenging enough, but if you explore each area thoroughly, you should make it through each of the game’s seven chapters without too much trouble. 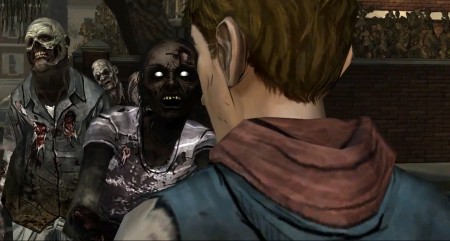 Writer Gary Whitta knows how to keep the player wanting more, and the events leading up to the conclusion of Episode 4 have me extremely eager to play the fifth and final episode! I need to know how this is all going to wrap up!

Once you finish The Walking Dead: Episode 4 – Around Every Corner — and to help slow your racing heart — you can see how the choices you made, throughout the episode, compared to others.

If you are old enough to handle pretty grim and mature situations and content, some harsh language and you aren’t playing this series, you really should be! At a price of no more than $5 per episode (and likely a lot cheaper if you keep an eye out for sales or buy a season pass) there is no reason why you shouldn’t be playing it. It’s arguably one of the best written and expertly paced games for 2012. If you start now, you’ll be ready just in time for the release of series conclusion!

The Walking Dead is my top contender for 2012’s Game of the Year, it’s a really well-written, aptly-paced adventure game that plays out like a television show or movie. Each episode is engaging and entertaining, and only takes a few hours of your time to complete.

Yes, zombies are overplayed, and you certainly have several choices of undead-themed games, like the Black Ops zombie mode, the Left 4 Dead series, and Dead Island, but if you want to be playing a game that really knows how to handle the zombie apocalypse, you’ll do the right thing and play The Walking Dead.

Telltale has delivered an engrossing and highly entertaining episode with Episode 4 – Around Every Corner, and has masterfully set up to a very interesting and powerful series conclusion. I can’t wait! Come on, Telltale, let’s finish this strong!

Troy is the Features Editor at Brutal Gamer. When he's not writing about or playing video games, he's enjoying life with his wife and children. He also loves coffee. And lots of it.
Previous Batman to arrive on Wii U as launch title
Next Extra Life 2012 Is Coming