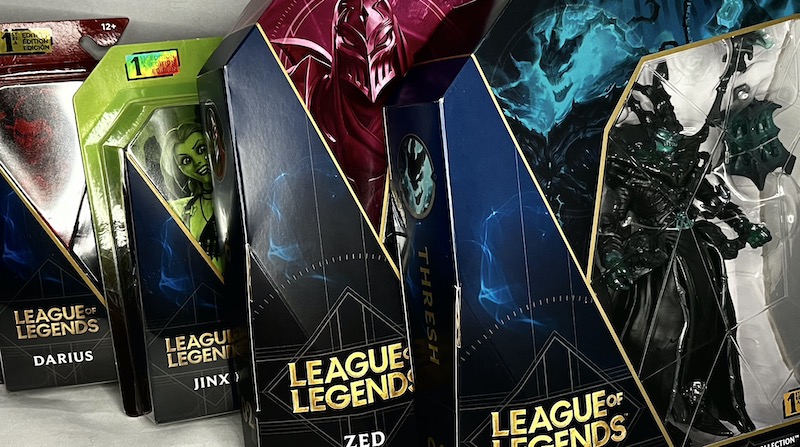 Spin Master is back once again, and with a brand that’s not seen action figures before. Let’s check out wave 1 of the new League of Legends figures.

The Legends have arrived

League of Legends has been around for a long, long time. The PC MOBA (multiplayer online battle arena) pretty much founded the genre way back in 2009, the it was released by Riot Games.

It’s waxed and waned since then, but it’s never really ‘gone’ anywhere. Gamers still actively play League of Legends, and you can regularly see many chatting about it online. For that matter, it’s got a still-hot competitive scene as well.

Though the game never made the leap to consoles, it’s hard to overstate the level of popularity that it’s enjoyed. Why it’s never had an action figure line til now has been a mystery. It certainly seems like a license along the lines of LoL’s should have been scooped up long ago.

Why that never occurred is confusing for sure, but the wait is finally over. Not long ago, the IP was licensed by Spin Master. You likely know that name, and not long ago it would probably have been for things other than action figures.

Spin Master has been busy though, over the last few years, with their biggest move being the creation of what’s been a pretty popular 4″ DC Comics action figure. And now, here comes League of Legends.

LoL has a 4″ line as well, which we’ll take a look at, but it’s the 6″ scale figures that knocked me out. Let’s dig into both.

When you talk about classic action figure lines, the biggest were usually some of the smallest. Just check out the likes of Star Wars and GI Joe to see what I mean. The 4″ scale of figure has been a mainstay since the 80s, and it continues into the current year with 1 of Spin Master’s 2 LoL series’.

As you can see, these are individually carded figures. Each one has a blister’d figure on the front and small bio on the reverse. We received both Darius and Jinx to take a look at.

Darius is a muscle-bound fighter, who comes packed with a giant battle axe. The detail on that piece of hardware is really nice, with a cool skull design sculpted in.

His facial sculpt looks a little like he’s more bored than anything else, and his articulation is pretty limiting. That’s kind of weird too, since he actually has a decent amount of it, with 12 points of articulation. As I was playing around with the figure though, I couldn’t get it him into too many natural-looking action poses.

This one’s no Jinx

Jinx on the other hand, is terrific. She’s bright and colorful, has some nice tattoo detailing, and comes with a pair of weapons. She’s also sporting a pair of braids, that are nice and flexible. They definitely won’t get in the way while posing her.

She can hold both weapons at the same time, and looks cool wielding one as well. I will say that she has some issues with getting 2 hands on what looks to be a kind of (pink) mini-gun. That seems like a natural pose for her, and yet I couldn’t really get her into it. Again, while the articulation is nice on these figures, it still could have been better.

Like Darius, her weapons don’t have much in the way of paint apps, though these 2 do look significantly nicer. There’s way more detailing sculpted into them than in Darius’ axe.

Both figures come complete with stands as well. They’re pretty nice too, though I did have some issues in getting Jinx to actually stay on hers. She tended to pop off of it.

Don’t get me wrong, the 4″ LoL figures are nice enough, but the 6″ scale is a home run. If this first wave is indicative of where Spin Master is heading with this line, I’m very much interested in seeing what’s next.

Like with the 4″ figs, we got a pair of 6-inchers to unbox and play with. Those would be the ninja-like Zed, and the awesomely demonic Thresh. We’ll start by opening up the former, because Thresh is seriously the cream of the crop (Macho Man would be proud).

No, we’re not talking about Lord Zedd here, the Power Rangers villain. Zed is a League character who’s much more ninja-like in appearance, though he does carry through some cyborg-y elements. He does share one trait with the double-d version though, in that he’s a leader. Only in his case it’s of something called the Order of Shadow. Pretty slick name there, honestly.

Zed has a similar color scheme to Darius, though I don’t think the two are linked. His comes off way better too, with some nice silver and gold tones. His armor is really well detailed overall, and that goes for his cloth elements too. They don’t interfere all that much with the articulation, because of the flexibility. Maybe just a bit.

On that note though, Zed is pretty great. He’s nicely articulated, with double-joins, ball-joints at the shoulders, and a horse swivel. As you can see, you can get him into some cool poses, which the stand supports well.

He’s also got a four-pack of weapons, which are meant to be mounted on his forearms and back. All of it is removable though, so if you want to go for a different look, you can. You might have to figure out something to do with the spaces though, and the ball-attach-points on his shoulder blades.

Rising to the top

Then there’s Thresh. I first saw this figure in a press release a while ago and though he was awesome-looking then. But oh, is he ever so much cooler in hand.

Thresh is called the Chain Warden. And yes, his background is just as cool as his looks. This beast is a wicked spirit that captures souls, and keeps them trapped in his “unholy lantern”. That’s just all kinds of cool.

In terms of the figure itself, this is one that should appeal to fans of any kind of fantasy, or even horror. Even though he’s a spirit, he’d looks like he’d be right at home haunting the barrow downs of Middle-earth, let alone the universe of League of Legends.

Spin Master has some incredible detailing happening with Thresh. His sculpt is mostly cast in blacks, with skulls and bone ‘chains’ aplenty. Though he’s also sporting some really cool translucent greenish plastic around his face, hands, and neck. It gives the appearance of an ectoplasmic interior, under tall that armor. He’s also got some eerie green keys sculpted into his back, that I assume are to unlock his lantern.

Speaking of, the lantern includes some of that green cast as well, and a chain of its own that it can hang from. The fit is nice and secure, and the chain actually plugs into the end of his scythe. So the idea is that the lantern is on one end, and the blade is on the other. It looks awesome when it’s all set up, and increases the size of this already chunky figure.

He has similar articulation to Zed, so you can get him in some cool poses. I liked him a lot better in this way just because of the accessories, which add quite a bit to the overall menace of the figure.

Zed is great, but Thresh is kind of incredible. A flat-out winner.

Spin Master has the makings of a hit on its hands with League of Legends. The twin scales give collectors of both something to grab, though the 6″ figures are (so far anyway) the far and away winners.

Both figures are excellently done with plenty of articulation and some cool detailed touches. If you’re looking to pick up one of them to try the line out though, I’d have to go with Thresh. That is one wicked piece of plastic.

After this early look at what’s hitting stores right now for LoL, I am eagerly awaiting what Spin Master has cooked up for the future. And I say that as someone who’s not into the source material at all.

Spin Master has a very promising line kicking off with League of Legends. The first wave(s) of figures include both 4" and 6" figures, but while the smaller ones are neat, the 1:12 scale figures are the clear winners. And definitely give a look to Thresh. He's just a flat-out awesome demon/ghost that could fit into a number of collections. Oh, and just a note - when you check out the scores, remember that these are averages for all of the above.

Jason's been knee deep in videogames since he was but a lad. Cutting his teeth on the pixely glory that was the Atari 2600, he's been hack'n'slashing and shoot'em'uping ever since. Mainly an FPS and action guy, Jason enjoys the occasional well crafted title from every genre.
@jason_tas
Previous Trailer: Solasta’s first big DLC offering, Primal Calling is out now
Next Trailer: Sink your fangs into this new look at Vampire: The Masquerade – Swansong