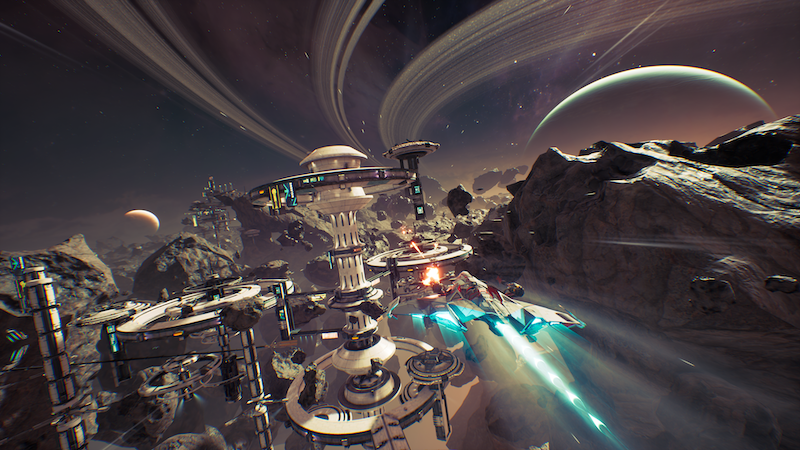 The long-awaited Chorus from Deep Silver and Fishlabs is coming up before the year is out, bringing space combat with an emphasis on story.

The Chorus tunes up

You might remember hearing a bit about Chorus right around E3 ‘time’ (not that there was an actual show) last year. We haven’t heard much since, but the game is set to make a surprise launch this very year. Chorus looked and is looking excellent too.

The game melds woman and machine, as pilot Nara and her sentient ship take on a deranged cult… in space.

In Chorus you take control of ace pilot Nara, a fugitive on a quest to destroy the dark cult that created her while facing her haunted past along the way. Along with her sentient starfighter, Forsaken, she explores ancient temples, engaging in exhilarating zero-g combat and fighting to unite the resistance forces against the cult (known as the Circle) and their leader, the Great Prophet.

Kind of tough not to get pumped for that. That’s especially true since it’s been a while since there’s been a great space-fighter game, so fingers crossed that Chorus is exactly that. Either way, we’ll find out on December 3rd, when the game arrives on the Xbox Series X|S, Xbox One, PS4, PS5 Stadia, PC (via Epic Games Store and Steam), and Amazon’s Luna.

As you might imagine too, there’s a pre-order incentive as well. A purely cosmetic item, pre-ordering the game will net you “the Elder Armor skin set”. The set adds a gold and purple coat of paint to Nara’s ship Forsaken, as well as “all three of the starting weapons”.

Jason's been knee deep in videogames since he was but a lad. Cutting his teeth on the pixely glory that was the Atari 2600, he's been hack'n'slashing and shoot'em'uping ever since. Mainly an FPS and action guy, Jason enjoys the occasional well crafted title from every genre.
@jason_tas
Previous Trailer: Dig into Company of Heroes 3 development with new dev diary
Next Trailer: The Forgotten City comes to Switch with Cloud Version