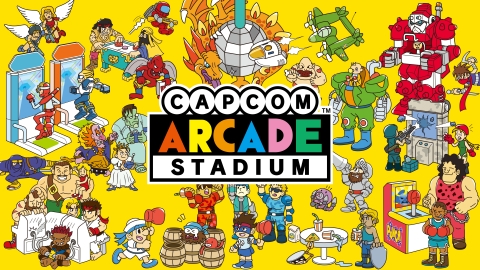 Home / News / Nintendo Download: Strike While the Persona is Hot

Yes, it’s a big week for the Switch alright, with a surprising amount of new content that’s worth talking about. That starts off though, with something that was just announced at this week’s Nintendo Direct. Of course, I’m talking about the Capcom Arcade Stadium.

Available in a semi-a’la carte format, or as an all-encompassing purchase, Capcom’s latest Switch endeavor is a compilation of their arcade titles. Now there’s plenty of stuff missing, so those looking for more niche Capcom cabs to be included might be disappointed. But if you’re a Capcom fan who’s looking for their bigger and better known classics, this one might be for you. As a sampling, you get Street Fighter titles in there (natch’), plus the likes of Final Fight, Strider, and Commando.

And again, you don’t have to get all the games if you don’t want to. Packs are available separately, Ghosts ‘n’ Goblins is a standalone possible addition, and you get 1943 for free. So you can try out the interface on the house if you like. Again though, it’s far from alone this week.

Also hitting the Switch, or out now, is Persona 5 Strikers, Curse of the Dead Gods, and the usual cadre of smaller releases. Check out the full listing below.

Jason's been knee deep in videogames since he was but a lad. Cutting his teeth on the pixely glory that was the Atari 2600, he's been hack'n'slashing and shoot'em'uping ever since. Mainly an FPS and action guy, Jason enjoys the occasional well crafted title from every genre.
@jason_tas
Previous The story of The Witcher continues in Dark Horse Comics
Next Trailer: Zombie Army 4: Dead War arrives on PC