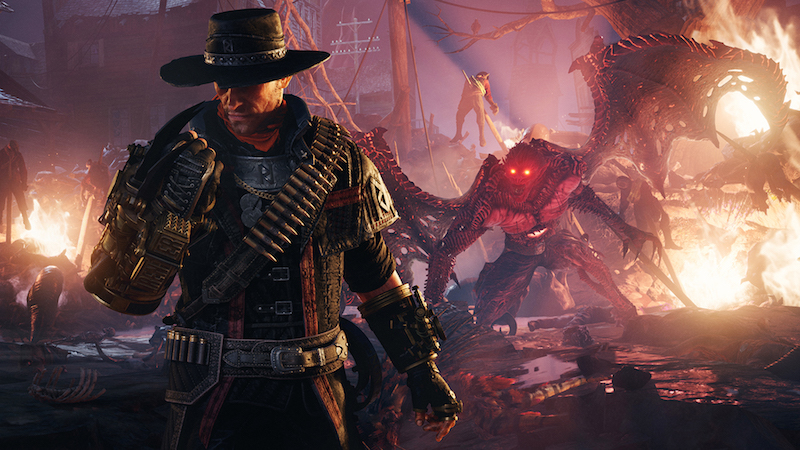 Flying Wild Hog and Focus Home’s Evil West is bringing a unique vision of horror to consoles and the PC in 2021. Pack your six-shooters.

Pistols, rifles, and a power-fist from hell

Oh my does Evil West look great. Now, granted this is just a first-look at the game, but it’s looking pretty darn cool. And it’s also from developer Flying Wild Hog, who have a pretty good rep thanks to the modern Shadow Warrior games.

Their latest is a pretty big departure from those titles though. Sure there are still monsters to kill, but gone is the modern, Asian influenced world of Shadow Warrior. In it’s place is a harsh and unforgiving wild west frontier. Only instead of claim jumpers and outlaws, this one’s populated by vampires and demons.

A dark menace consumes the American frontier. As one of the last agents of a top-secret vampire-hunting institute, you are the final line between humanity and a deep-rooted terror that now emerges from the shadows. Rise up to become a Wild West superhero, eradicate the vampire threat and save the United States!

Unleash hell in style with your firearms, lightning-fueled gauntlet, and gadgets in visceral, explosive combat as a lone hunter or with a friend in co-op. Explore and fight in a narrative-driven campaign while upgrading your weapons and hunting tools. Unlock new perks to evolve your monster-slaying mastery, crafting your own playstyle to defeat the supernatural hordes.

No launch date just yet for Evil West, but you can expect it next year for the PS4, PS5, Xbox One, Xbox Series X|S, and PC.

Jason's been knee deep in videogames since he was but a lad. Cutting his teeth on the pixely glory that was the Atari 2600, he's been hack'n'slashing and shoot'em'uping ever since. Mainly an FPS and action guy, Jason enjoys the occasional well crafted title from every genre.
@jason_tas
Previous Activision lays out Season 1 of Call of Duty: Black Ops Cold War
Next WRC 9 (Xbox Series X|S) Review