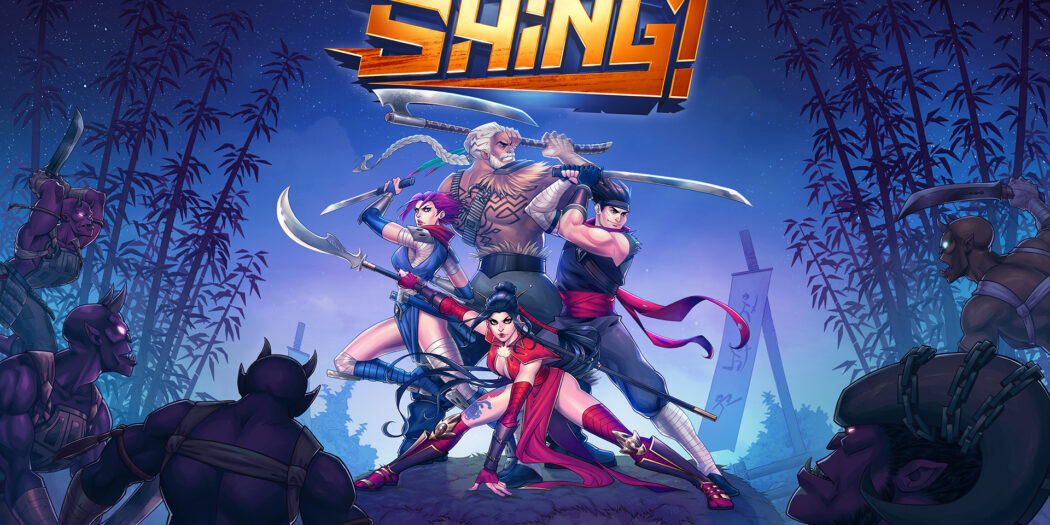 Shing! is an anime beat ‘em up, but not based upon an existing anime. I have to say, it is weird to encounter a beat ‘em up outside of an arcade, but not unwelcome. Shing! has that wonderful quality of satisfying combat and quality visuals that make these types of games almost addictively fun to play.

Recommendation-wise, this is an odd one. The game was clearly intended to be played co-op. However, it is entirely possible to play through the entire story yourself.

Levels of difficulty, challenges and unlockable costumes give this game some re-playability. I can’t recommend it on story, but everything else works well enough to deliver a fun experience.

The world of Shing! is powered by Essence, a seemingly limitless power source that emanates from the Starseed. When this artifact is stolen, it is up to our four main characters to recover it. They will travel through the lands, having long conversations about their love lives and histories.

The characters are archetypes of note. You’ve got the cocky one, the burly one that likes fighting, the studious girl and her perfection obsessed older sister. So far so anime. Throughout the levels, however, are designated lore points where you see the characters converse about their lives. It’s surprisingly effective in a game such as this, where breaking up the flow too much with story would hinder the experience.

The issue comes with the character’s growth. At the lore points, the characters have a way of endearing themselves to you purely through their interactions. I was geared up to see the resolution of their interactions, to see how they grow as people and warriors are such an intense journey. Then the game ends.

The only closure you get from the story is an end credits “where are they now” reel featuring the characters after they return home. The images in the reel are well drawn, and the idea is cute, but it left me feeling unsatisfied. I wanted conflict, growth, change, and got none of it. It didn’t feel like this journey affected the characters at all, so why did I play through it?

Shing! is an arcade style beat ‘em up that uses the right analogue stick for attacks. This is both a good and a bad thing. It sacrifices precision for accuracy if you can ignore the paradox of that statement. The analogue stick allows you to accurately attack in any direction, pulling off combos and such smoothly, but you lack the preciseness that button presses allow.

That being said, it may have been for the best that they didn’t use button presses, since they frequently refused to register while I was playing. I lost count of how many times a character would just keep running after I told them to stop, which usually resulted in me taking damage. There were also issues with the block and dash buttons just not working sometimes.

The game is buggy certainly. My first experience with the game ended after a challenge because the menu refused to operate. Aside from the bugs, a suggestion I want to put out there is a key in the main menu that reminds you what the power ups do. They are fairly evident through use for the most part, but there’s a white powerup that seems to do nothing except give your character funky wind armbands.

Aside from all that, the gameplay is solid. Most power ups are easy to figure out and effective, the combat rewards style and mixing up combos, the enemy variety is insane and there were many levels that distanced themselves from the basic “hit everything till it stops moving” formula. The gameplay rewards you for beating levels with tokens used for unlocking character outfits.

The character playstyles don’t seem vastly different, which I would pose is a good thing. You don’t want your character to die, then must switch to one you have no practice with using moves you’ve never seen. It does make me wonder why anyone would choose a specific character other than looks, but it is a benefit in a multiplayer game. No one is stuck with the “bad” character.

If anything, the gameplay carries this game. It’s fun and easy to pick up, but challenges enough even on the easier levels. Everything works well to create intense battles that you need to pay attention to win. A lot of games I play start to feel like a chore, like the combat is there to make the game longer, but Shing! really puts its all in here.

This game is gratuitous. It is gratuitous in a way only anime can be, so of course all the women wear skirts that go down to their hips and all the dudes expose muscle, just so every aspect of the male power fantasy spectrum is present. Two of the above-mentioned lore points take place in a hot spring and a toilet, so that’s the kind of game we’re dealing with.

Crudeness aside, the visuals on display are great! Every character has unique, if pandering, design and every enemy is visually distinctive. The UI doesn’t get in the way of combat, and neither do the particle effects. Which is impressive since the combat is the majority of what happens on screen. This game never feels cluttered and is a genuine joy to look at.

While the characters may have been spewing unfunny jokes and random details from their lives, the voice acting is wonderful. It’s quite easy to make characters that look different but feel the same, and voice acting plays a huge part in that. Shing!’s actors take these characters and make them feel like people, which is commendable to say the least.

The music fits the tone well, amping you up for combat while maintaining the mysterious aura of a misty forest, or the chaos of a burning city in the downtime. It also goes a long way to make the attacks feel weightier, giving each sword swing and electric after attack a satisfying sound. The character’s one liners in combat gets on the nerves though.

Shing! is a game that provides a good gameplay experience, but a story with no pay off. The visuals and music are fantastic, but the characters are crude tropes and gratuitous power fantasy figures. It’s hard to recommend this to anyone that wants a captivating story, but considering the low cost, I would say you should pick this up if you and your friends have been missing beat ‘em ups.

A fun game, with good visuals and soundtrack, but brought down by the lack of closure from the story.

Young, talented, funny, hard working, duck-like, consistently punning, the center of a collapsing star, older than time and weird. He is two of these things. Beyond that, I'll never tell...
Previous Color your own marine with variant Warhammer 40,000: Marneus Calgar cover
Next Assassin’s Creed Valhalla dated, arrives November