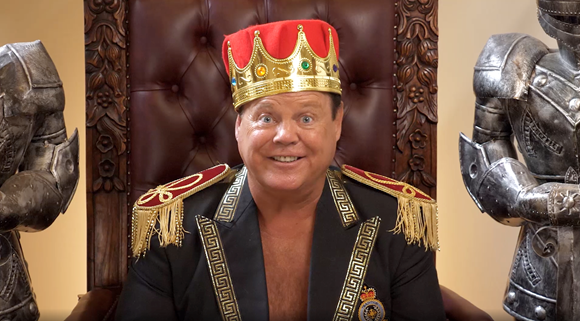 This year’s WWE release from 2K is set to be of a different sort. It’s all arcade action for Battlegrounds, and and The King is back in the booth.

It’s been a while since Jerry ‘The King’ Lawyer stepped into the announce booth for a WWE wrestling show. But he’s back now, and set to call the weirdest and wildest WWE title in years.

Not since possibly Wrestlemania: The Arcade Game has there been a wrestling game like WWE 2K Battlegrounds. The game is ridiculously over-the-top, and looks more like a fighting game than a grappler.

While we’ve seen it in action already, we now get to hear it as well. Today 2K announced that legendary announcer (and wrestler) Jerry Lawler would be one-half of the broadcast booth for the game. The other half… won’t be who you’re expecting (mainly because it’d be impossible), and will instead be Mauro Ranallo.

Give them a listen here:

In “Clash of the Eras,” WWE Hall of Fame commentator Jerry “The King” Lawler cheers on the WWE 2K Battlegrounds roster of WWE Legends – such as Undertaker, Mankind, Beth Phoenix and the Bella Twins –  as they compete in fantasy matches against several of today’s most popular WWE Superstars, including Roman Reigns, Drew McIntyre, Bayley, Sasha Banks, Finn Bálor and more. While Lawler shows his allegiance, he is joined in the trailer by renowned sports broadcaster and WWE NXT’s Mauro Ranallo, who will make his WWE 2K in-game debut as a member of the WWE 2K Battlegrounds commentary team.

Jason's been knee deep in videogames since he was but a lad. Cutting his teeth on the pixely glory that was the Atari 2600, he's been hack'n'slashing and shoot'em'uping ever since. Mainly an FPS and action guy, Jason enjoys the occasional well crafted title from every genre.
@jason_tas
Previous Gamescom 20: Doom Eternal expands with The Ancient Gods
Next McFarlane Toys brings back chase figures with “bronze” Joker