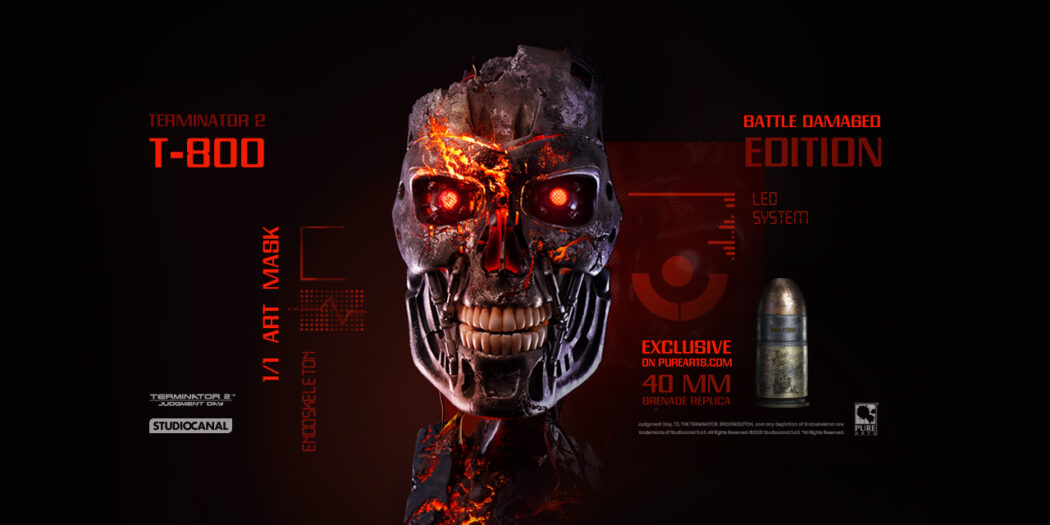 If you’re a big time Terminator fan, then this one is for you. PureArts has crafted a fantastic “battle damaged” endo-skull and it’s up for pre-order.

Straight from the future

A lasting franchise that’s never quite as dead as people think that it is, Terminator is still a premier name in pop culture. All you have to do is look to the collector market for proof.

Every year, there are still plenty of action figures, comics, statues, and more to buy. This though, might be the best looking ‘anything’ that’s come along in a while. Cause, wow.

Now, if you don’t know the name PureArts, it might be because they’re relatively new. They have mainly worked with Ubisoft up to now too, with their Assassin’s Creed line of statues. Simply, they do good work. Everything that I have seen from them has been fantastic looking, and boy does that include this.

A riff on their already available (and long sold out) endo-skull, the battle damaged version is honestly even cooler. Cast from poly-resin, and featuring an LED lighting system, this is a collection-centerpiece waiting to happen.

Of course, that also means it’s not cheap, clocking in at $429.99 USD. Though, if you’re a big enough Terminator fan, that might not be all that bad of a price tag for what you’re getting.

You can grab one for yourself right here, while they last. The 1/1 scale T-800 Battle Damaged Edition Art Mask is shipping in quarter 1, 2021.

Update: The above story has been changed to reflect the Q1 2021 ship date.

Jason's been knee deep in videogames since he was but a lad. Cutting his teeth on the pixely glory that was the Atari 2600, he's been hack'n'slashing and shoot'em'uping ever since. Mainly an FPS and action guy, Jason enjoys the occasional well crafted title from every genre.
@jason_tas
Previous Serious Sam 4 re-dated, coming up in September
Next Fast & Furious Crossroads revs up for launch today