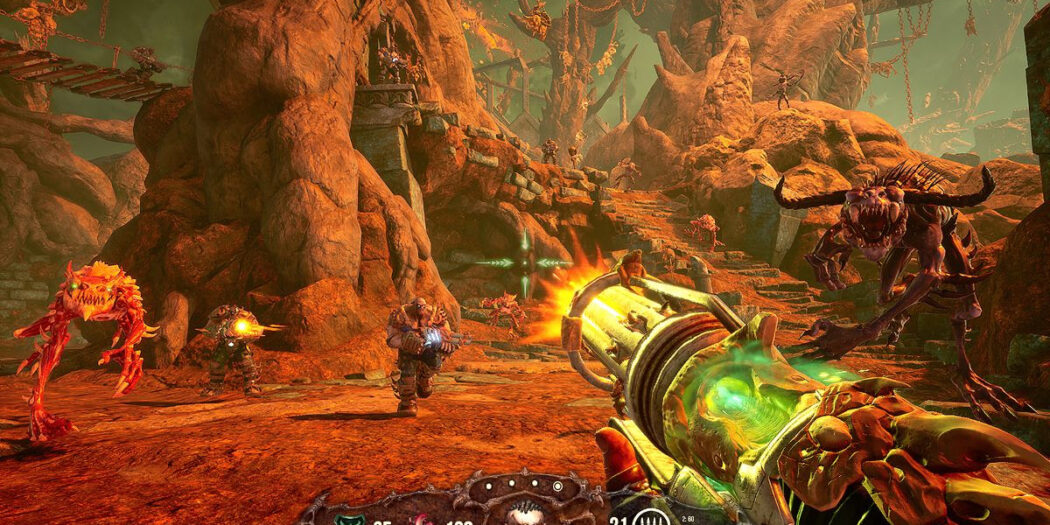 Looking for an FPS that’s a little more like the classics, but with a modern look and feel? Than you’re going to want to check out Hellbound.

Caked-on blood and gore, action that has you zipping around the battleground while you blast enemies, and just the very edge of a narrative. If that all sounds like heaven to you, then you want to take a peek at what Nimble Giant and developer Saibot Studios have cooked up with Hellbound.

The game is a love letter to the beginnings of the genre, namely the style of FPS that the legendary iD produced with the likes of Doom and Quake. Take one look at the trailer, and that’s easy to see.

If you’ve missed the shooters of the 90s, this one’s for you.

As a hulking brute named Hellgore (voiced by Artie Widgery), players are tasked with tearing their way through Hell, a once-sacred place that’s now home to unspeakable evils. Hellbound wears its inspiration from FPS classics like DOOM (1993) and Quake (1996) on its sleeves, as fans will find themselves swapping explosive weaponry on the fly in order to rack up kills, earn power-ups and blast a demon so hard its momma would feel it.

Look good? Hell yeah, it does. And if you’re ready to dig into some demons, then you’ll be happy to know that it’s out right now. Hellbound is available for the PC (via Steam), and is on sale for 20% off the ticked price this week only. It’ll run you just $14.99 USD.

Jason's been knee deep in videogames since he was but a lad. Cutting his teeth on the pixely glory that was the Atari 2600, he's been hack'n'slashing and shoot'em'uping ever since. Mainly an FPS and action guy, Jason enjoys the occasional well crafted title from every genre.
@jason_tas
Previous Skully (PC) Review: Use your Head!
Next Call of Duty: Modern Warfare Season 5 trailer is here