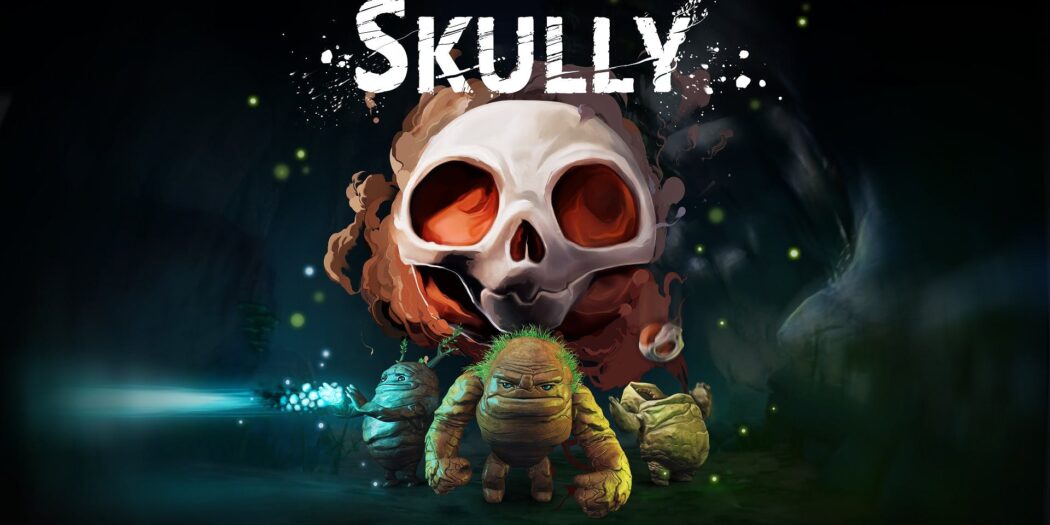 Skully embodies the reason why I play video games. Rather gives me opinion away in the first line, granted, but I feel it necessary to explain that right away.

Every review poses its own challenges, and the challenge here with Skully is not filling the next precious moments of your life with my gushing over this property. So, as always, I will give my recommendations here for those who do not wish to read a whole article.

Please buy Skully. It currently sits at the lofty position of my current game of the year, for whatever that is worth. It may be short, it may have its issues, but it will enthrall you for your entire playtime.

In Skully, you are a skull, fittingly. Reanimated with a magic lump of clay by a resident deity of an island, you are tasked with helping this god repair his broken family and restore order to the island. Each part of the island is controlled by one of four gods, themed with the four elements, and you must get to each one’s Central Chamber to talk, or more accurately, stop them.

Let’s get the problems out of the way first. Numero uno is that none of the characters are particularly deep. The first god, Terry, is probably the most complex character in the entire story and even he can be one-note at times. The next problem is that certain plot points are incredibly predictable, which may put some people off.

However, let me explain why these issues don’t matter. The flavour of today’s topic is presentation, and holy cow on the moon does Skully present itself well. Each character is charming, well designed and expertly voiced. While they may be simple, they are in no way poorly written. All of their personalities compliment one another and make their interactions a joy to be a part of.

I loved every second spent listening to these characters talk, from the tutorials to the climactic finale. It really goes to show that not every character has to be complex, so long as they can interact with one another well enough. I predicted every major twist that Skully through my way, but I was having such a good time that it didn’t bother me.

Most of the spoken dialogue happens during gameplay, so as not to break up the action, but even the storybook-like cutscenes captivated me. Every line is delivered brilliantly as well, which truly could have crippled the experience. I find myself at a loss for words purely because you need to experience this story for yourself.

The gameplay of Skully is that of a 3-D action platformer, which already sets off some red flags. 3-D platforming is something I usually don’t tend to get into, as it comes with several inherent problems. Skully doesn’t avoid these problems, per say, but it does enough right to make you forget about them entirely.

You can have three forms of any combination in the world at once, which comes into play with puzzles later, and can eject yourself and re-enter them at will. This divorces itself from the high-speed gameplay style of Skully’s original form but does allow for more solid interaction with the world.

What I really want to talk about though, is how the game teaches you. Most games would pause the fun to show you how a button works, or just give you a diagram of what all the buttons do. Skully, on the other hand, introduces a mechanic with a simple drawing on a nearby wall, then makes you practice it.

Boom! Done! Brilliant! Immediately, you know how to make the mechanic work and how it affects gameplay. I wish more games did this; it just makes puzzle solving so much more satisfying. The combat is fairly simple though, but it never features as a core part of the world and does feature in puzzle-solving at certain points, so it works out.

Next up is once again, the problems. Since Skully is perfectly round, he rolls a lot even when idle. This also makes practically every platform slippery. I don’t need to explain how frustrating it is to land on a platform, only to slip off again because it was moving, or you had the poor luck of thinking you could stop for a moment.

This couples with the button presses occasionally not registering, the camera misbehaving and the misleading hit boxes can make for screaming frustration. Finally, when you die, all the various forms you created disappear. This can be very annoying when you spawn in at a checkpoint by a very tricky jump or puzzle and must set everything up for the fifth time.

That being said, I never quit the game out of frustration. The general gameplay is simple enough to be fun and skilful enough to be absorbing. Every time I got stuck on a tricky bit, yelling obscenities at my controller, it would all suddenly click for me. I’d flawlessly get through and all my frustrations just drained out.

The boss fights aren’t… challenging… but each one is fun! Finish Line Games really do understand what a boss fight should be. Each one requires you use skills learnt in previously levels to win, with the final three chapters illustrating that beautifully. While it didn’t take hours to whittle down each boss, or figure out their stage’s gimmick, I still enjoyed every fight.

It really is an experience that you just want to keep trying with, and I was amazed by how much fun I had with Skully. I initially planned to play 3 levels a day to meet my deadline but ended up playing around 8 a day because I genuinely did not want to stop. I do recommend you play with a controller though.

The music is fantastic at setting the tone. Every stage has its own ambient noise that somehow blends wonderfully into every song. Even the creature sounds and exertion noises are almost melodious. In a lot of games I play, I tend to turn down the volume at particularly tricky bits so I can focus more, but I wouldn’t have dreamed of it in Skully.

As mentioned above, the voice acting is stellar. Every character feels unique. Not different, unique. Two practically identical soldiers in a military shooter can sound different, but in Skully, every god has a voice that fits their personality gloriously. The voice actors should be celebrated for their performances because the game wouldn’t have done half as well without them.

Skully has a sort of cell-shaded, almost Claymation-like style. I love Claymation myself, so this was right up my alley, but I feel that this may not be everyone’s cup of tea. Just be aware that this game is stylised, but in a way that really fits the story it is trying to tell. There were lots of little details in Skully that made it seem much more alive.

For instance, the more damage that Skully takes, the smaller the ball of magic clay in his head gets. This is a seemingly insignificant, hardly noticeable detail that just looks good. The strength form and leap form have bits of grass and leaves respectively, which take a second to grow out of their bodies when they form. Again, unnecessary, but just that little bit extra.

However, there were the occasional moments of lag. This may be my PC not running the game well or just simple optimisation issues, but each level started with the textures needing a second to pop in. Once or twice the lighting also took a moment, making the framerate drop while you are waiting. I have very vivid and painful memories of deaths caused by momentary framerate issues.

While I may have highlighted many problems in the above paragraphs, I have yet to come to the big one. Skully is unfortunately short. At time of writing, I completed the main story in 7 and half hours. It does give you an opportunity to replay chapters and get collectables, but these only unlock concept art.

This could be a deal breaker for some people, but I would like to say this. Skully does not need to be longer than it is. The story is punchy, the gameplay solid and the experience fun. It may only be around two and a half Lord of the Rings films long, but it will be 7.5 hours well spent. I would, however, like to see a challenge mode or story add on in the future.

If I could only recommend one game to you in this year so far, it would be Skully. Absolutely, without a shadow of a doubt. Go and play it, and if you are reading this Finish Line Games, thank you for such a fantastic experience!

Young, talented, funny, hard working, duck-like, consistently punning, the center of a collapsing star, older than time and weird. He is two of these things. Beyond that, I'll never tell...
Previous DC: Collecting the Multiverse on the way from Sideshow
Next Hellbound blasts onto PC’s today