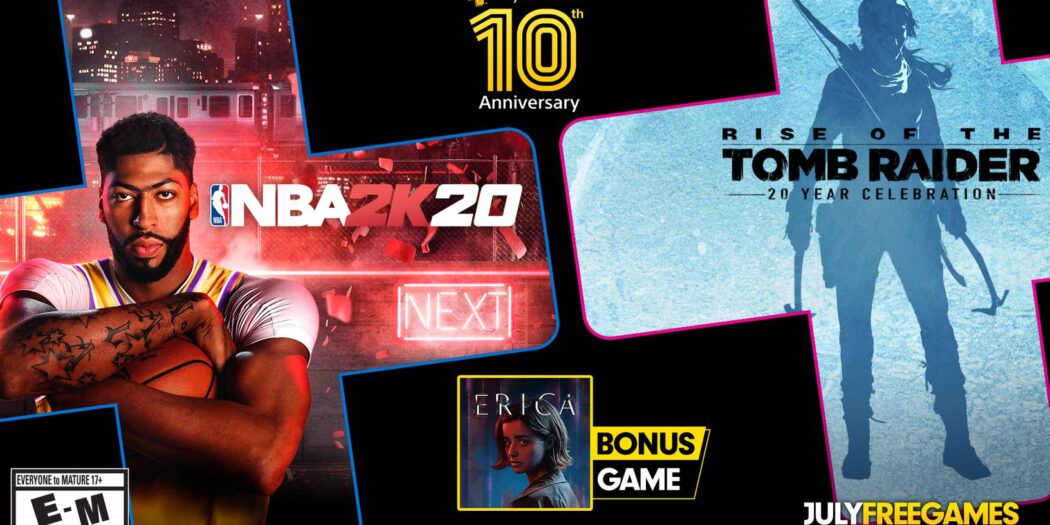 A trio of games come to PlayStation Plus’ free games promo this month. Gamers sho subscribe to the service, can dig into NBA, Tomb Raider, and Erica.

It’s actually kind of hard to believe that it’s been a decade since Sony first introduced PS+. The service did indeed debut with the PS3 though, and brought gamers much the same things that it does now. Meaning, online play and monthly freebies.

As a way to celebrate that decade of destruction, Sony has seen fit to add a third free monthly title to the normal selection of 2. So this month (July 2020), PS4 gamers will get to download and keep (for as long as they have their subscription): Rise of the Tomb Raider: 20 Year Celebration, NBA 2K20, and Erica.

Ah but that’s not all. Sony will also be releasing a special 10 years of PS+ theme for the PS4. That will be available for a limited time only, and Sony says that it will be along later this week. So when you see it on the PS Store, grab it.

Finally, for those who have yet to become members of PlayStaton Plus, there’s a free weekend coming up. Just in time for the Fourth of July, Sony will be hosting a free multiplayer weekend, so you can get a taste of what the service offers.

That will begin on July 4th at 12:01 AM, and come to a close on July 5th at 11:59 PM. That’s no specific time zone either, but will be your local time according to Sony. Of course, you’ll need a PS4, an internet connection, and a multiplayer-capable game to take part. They can’t give you everything you know.

NBA 2K has evolved into much more than a basketball simulation. With its immersive open-world Neighborhood, NBA 2K20 is a platform for gamers and ballers to come together* and create what’s next in basketball culture. Take your skills to the next level, featuring an upgraded motion engine with signature styles, advanced shooting controls, a new dribble size-up system, refined off-ball collisions, and a new read & react defensive game.

In Rise of the Tomb Raider, Lara uncovers an ancient mystery that places her in the crosshairs of a ruthless organization known as Trinity. As she races to find a powerful and sought-after artifact before Trinity, the trail leads to a myth about the Lost City of Kitezh. Lara knows she must reach the Lost City and its hidden secrets before Trinity as she sets out for Siberia on a thrilling expedition.

This feature-length cinematic experience merges high-fidelity Hollywood production values with engaging, tactile gameplay. Become Erica, a brave young lady plagued with nightmares of your father’s murder. With the traumatic events that have haunted you as a child dragged back into the light of the present-day vis grisly new clues, it’s up to you to unearth the shocking truth behind this devastating tragedy. Every choice you make influences how the game develops, with multiple endings awaiting you at the finale of the emotional branching narrative.

Jason's been knee deep in videogames since he was but a lad. Cutting his teeth on the pixely glory that was the Atari 2600, he's been hack'n'slashing and shoot'em'uping ever since. Mainly an FPS and action guy, Jason enjoys the occasional well crafted title from every genre.
@jason_tas
Previous SDCC 20: Archie horror comes home with Jughead the Hunger statue
Next Nintendo Download: Invert Your Aim, Invert Your World