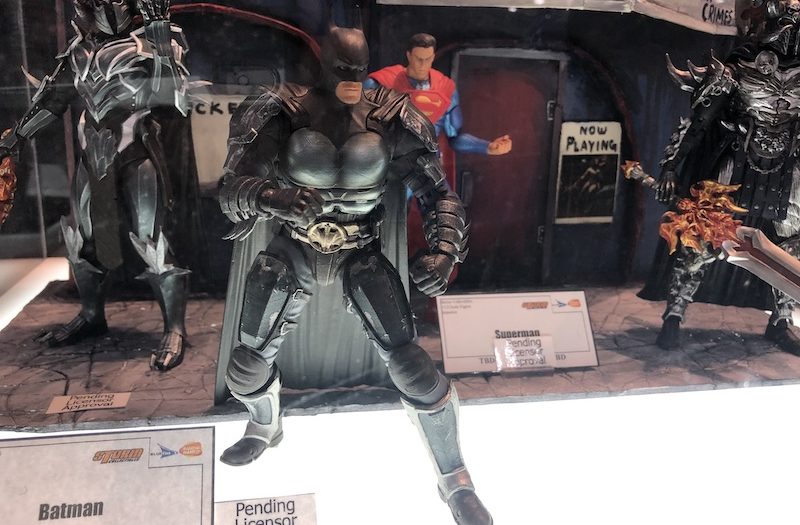 If you’re a fighting fan, there’s no toy company better than Storm Collectibles. From Mortal Kombat to Injustice 2, they had plenty on hand.

Admission: I love Storm Collectibles. I have a few of their MK and Street Fighter figures, and they’re all great. Storm offers incredible articulation and sculpting, as well as some truly awesome ‘special move’ effect add-ons.

At Toy Fair this weekend, the company had even more on hand, coming this year and beyond. That includes some incredible looking MK stuff, as well as some figures from other properties that you most definitely know.

A brand new series for Storm, Injustice 2 is just getting started. So far, we’ve seen the release of the massive Bane, who’s much more impressive in person than images. Seriously this is an awesome looking figure, complete with those great looking “venom” tubes.

From there, we’ve got Lobo, Darkseid, and the monster Superman villain Doomsday. Then there’s wave two.

Wave two is arguably cooler than the first, with Batman and Superman themselves included. There was an oddity here as well, with two versions of Ares shown off, though I’m not sure what the story was with him/them.

Storm was showing off a lot of MK at TF, though a good deal of it was already released figures. Those included the mecha-ninja’s: Cyrax, Sektor, and Smoke.

That’s not to say that there weren’t new figures out there though. Oh boy, were there. Not only did Storm bring MKII Raiden (two versions), but also the stunning MK3 Motaro.

This huge figure is easily the biggest in the line, and is the spitting image of the MK3 boss. As you an see, he’s still unpainted, but the sculpt is there, and looking awesome.

From there, Storm started branching out. They’re past limiting themselves to fighting games apparently, and are heading into the action game stage. On display were a few select pieces, including Sega and Microsoft greats.

Gears of War V had this monster on display, and as you can see below, Sega’s line is growing past Golden Axe. That included Axel from the brand new Streets of Rage game, coming up later this year.

Want more? There was one more surprise showing, with Samurai Showdown’s Haohmaru. We’ve known he was coming for a while, but this is the first time he’s been shown publicly.

Jason's been knee deep in videogames since he was but a lad. Cutting his teeth on the pixely glory that was the Atari 2600, he's been hack'n'slashing and shoot'em'uping ever since. Mainly an FPS and action guy, Jason enjoys the occasional well crafted title from every genre.
@jason_tas
Previous Toy Fair 20: Hasbro reveals more GI Joe Classified
Next 2019 Brutal Gamer Awards: Individual Honors