Greedfall is the newest RFP from the development team of Spiders and the publisher Focus Home Interactive. The creative team at Spiders is no stranger to the realm of RPGs after the under-appreciated, Technomancer. While Technomancer was a good starting point for Spiders, the team has really stepped it up with release of Greedfall.

The Premise Of Greedfall

Greedfall is set in a world similar to the late 17th century colonization era. There are two factions caught in the middle of an virus outbreak in Serene. The Merchant Congregation and Bridge Alliance are in tense partnership that could end at any moment as the people of Serene search for a cure from the deadly disease, Malichor.

The task for find a cure has been given to the main protagonist, De Sardet. After a deep character customization screen, it is up to De Sardet to get ready set sail across the sea for New Serene. A wild rumor is running rampart that there is a cure for Malichor that can be found in the magical island of Teer Fradee.

The land of Teer Fradee is much more than De Sardet could have ever expected. The natives are a group of magical people. They can control the plants and animals found throughout Teer Fradee. De Sardet learns quickly that the natives may indeed have a cure for Malichor, but is De Sardet willing to make the necessary sacrifices?

Greedfall is about choices and the repercussions of those choices. Choices made in the beginning of the game will have reverberations throughout the rest of the story. Throughout the game, players will have decisions to make that could effect future relationships with population of Teer Fradee. A companion of De Sardet may ask for assistance in finding out where they came from. However, doing so may cause more trouble for De Sardet’s relationship with that faction.

Spider has done a fantastic job of laying the groundwork for the lore of Greedfall. While it is not quite as big as The Witcher 3, there is a lot to experience across the different lands of Teer Fradee. During Spider’s first outing with Technomancer, the combat was lacking polish. This is not the case with Greedfall and Spider has done amazing job with the gameplay of Greedfall.

The Gameplay Of Greedfall

The gameplay of Greedfall is full of action. Players can choose from a plethora of game styles to combat the baddies of Teer Fradee. Players can be a trap-setting gunslinger, or take a more traditional route and fight monsters with swords and axes. A third path can have players experimenting with magic. However, players are not locked into one general path.

The extensive skills layout allows for any number of combination. Players can be a swash buckling, sword swinging solider, or they can be a science-based explosives expert. There are a number of one-handed and two-handed weapons available to slay monsters. Players can make a build and then coordinate with their companions accordingly so that the team will kick ass.

The Combat Of Greedfall

The combat of Greedfall is a blast to play. There are simple combos to learn and gaining more skills will provide extra moves. Some characters will block and evade, while some have the ability to perform counter moves. On top of that, players can assign actions to certain keys during a battle pause, but must quickly regain form or suffer the consequences. Overall, Spider has made significant strides in combat from their early game, Technomancer.

The Presentation Of Greedfall

The world of Greedfall is a beautiful space. There has been a lot of love character that has gone into building out this game. From the designs of the main character and monsters, to the designs of the world. You can tell a lot of time and effort was spent building island of Teer Fradee. One little quip has to do with the voice acting. While the acting itself is not bad, it is how the characters are modeled during the cut scenes. I think most RPGs suffer from these boring not-action orientated cut scenes. While not every cut scene should be full of action, something has to be done about watching three people standing around without any movement.

Spider and Focus Home Interactive have struck gold with Greedfall. This is an incredibly deep RPG. There are a number of exciting side stories that are worth exploring while the main story is full of mystery and intrigue. The branching story lines based on in-game decisions can warrant another playthrough to reach all the endings. Yep, that is right, I said multiple endings.

While it is hard to effectively capture this game, it is most like The Witcher 3. This is a big name to live up to, but Greedfall has done a good job of carving out a little niche in the RPG world. This game is not to be missed and anyone looking for that deep immersive itch should definitely give Greedfall a playthrough.


A review copy of Greedfall was provided by the publisher.

Spiders has another hit with Greedfall. An incredibly deep RPG with plenty of surprising lore to explore.

As a fearful proponent, I agree with out robot overlords on House Bill 10010101 - The Full Extermination of the Human Race. But until then, make sure to check out all my writings on video game stuff.
@@docbrown303
Previous Halloween ComicsFest to be October 26th
Next Celebrate 40 years of Dark Phoenix with new variants 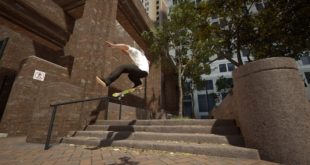 If you’ve been playing the Early Access version of creā-ture Studios’ Session, you’re about to …