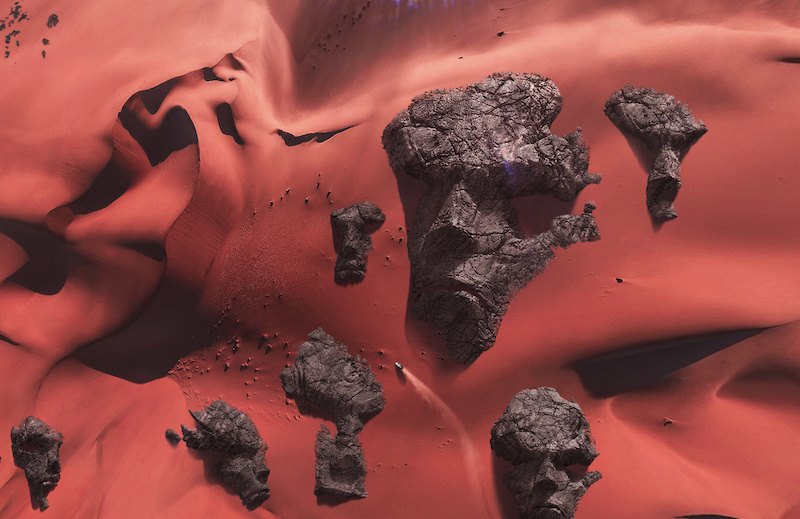 If you read BG regularly, you’ve read stuff I’ve written. My name is Jason and I’m the e-i-c and head news writer here at Brutal Gamer. That’s not all I do though, as I’m also a fiction writer who’s worked in both writing for screen, page, and more.

My newest project is called Eternal, and I’m thrilled to be joined by professional concept artist Greg Semkow for it. You probably know Greg’s work from everything from big budget movies (Alpha) to video games, and even the landmark 300th issue of Game Informer magazine. Greg produced all of the incredible cover art for all of the variant editions of that mag. Together we’ve crafted the world of Eternal.

A new concept, Eternal is an art book loaded with stunning double-page spread imagery, all depicting the incredibly varied terrain of an alien world. But that’s not all it is. Eternal is also packed with world-building elements and a deep story.

Taking place in the far future, our tale revolves around a set of colonies that find themselves suddenly cut off from Earth. As difficult as just surviving in this alien wilderness might be, things aren’t even close to being that simple.

The planet these survivors find themselves trapped on is much more than it first appeared. And what was originally a thriving exploration of a new world has crumbled into a desperate, never-ending post-apocalyptic battleground.

We’ll be revealing much more about the world and characters that Eternal will offer as the weeks roll on. We’ve got big plans for this new universe, including both a direct sequel and a radically different prequel story to tell. On top of that, animation and more is in the mix too. Right now though, we’re in the pre-launch phase for this very first chapter on IndieGoGo.

What that basically means is you can check out some teaser images, and add your email to a list for future updates. That’ll make sure we can let you know when the campaign officially is ready for backing. Click here to check it out.

If you decide you’re in, then we greatly appreciate your support. And if not, we hope we’ll win you over with what’s on the way. We’re beyond excited for you to see what Eternal will be, and where it’ll be heading.

See you on September 9th, when we officially kick off the campaign to bring Eternal to life!

Jason's been knee deep in videogames since he was but a lad. Cutting his teeth on the pixely glory that was the Atari 2600, he's been hack'n'slashing and shoot'em'uping ever since. Mainly an FPS and action guy, Jason enjoys the occasional well crafted title from every genre.
@jason_tas
Previous DC unveils new Legion artwork, issue 2 cover
Next SDCC 19: IDW announces signing schedule