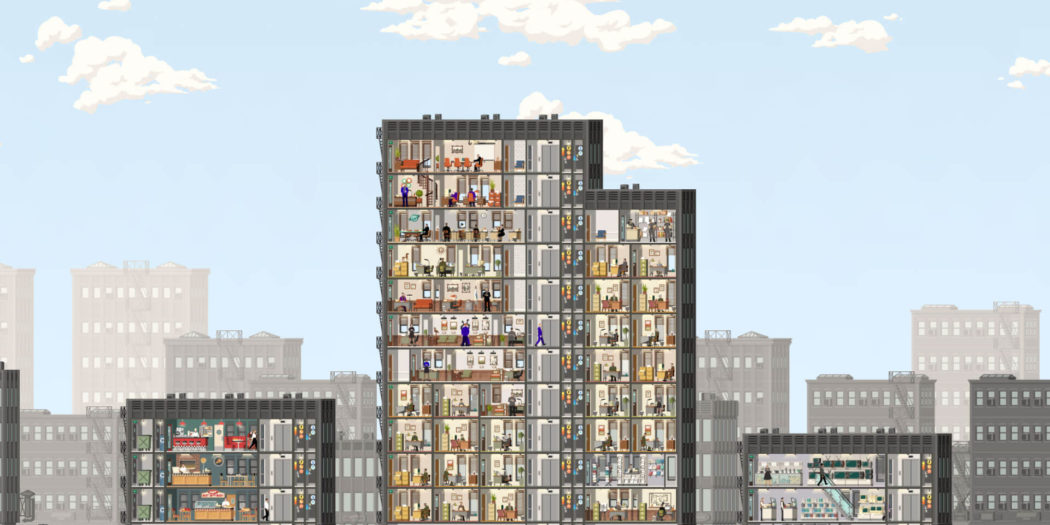 Project Highrise originally released on PC in 2016. Now, just under two years later, the game makes the jump to consoles under the guise of the Architect Edition. Does this simulator stand up for fans of the genre? Project Highrise towers above its competition.

Intuitive controls on console, quick hitting tutorials and challenging scenarios make for a fully-fledged tower simulator that I can only imagine fans will adore.

At its core, Project Highrise is a tower simulator, similar to Sim Tower and others of its ilk. Instead of building theme parks or ant colonies though, the player is responsible for creating a building to fulfill the needs of the scenario and the player’s own creative vision.

You have the ability to build apartments, retail spaces, offices, restaurants and hotel spaces. Every one of these categories is expansive. For instance, office options range from small, one-person spaces to headquarters for the corporations controlling the economy. I am a very big fan of the sheer expansiveness of the options players are afforded. I can easily see being frustrated if I were limited to one type of restaurant and apartment. The wide array of available tenants here though, skirts this issue nicely.

There are two main modes including sandbox, which (exactly as it sounds) lets players loose in a playground. There they can build their dream tower with no restrictions. The scenarios provide a bit more structure and guidance however. The scenarios are a great place to start too. That’s because they help players learn the game and all of the features in a more open environment than the tutorial.

Speaking of the tutorials, Project Highrise has five of them. Each one is very quick and to the point. I made it through all five in about 10 minutes and felt confident moving into the game’s first scenarios. These quick tutorials are a blessing, and I very much appreciate their brevity.

Perhaps the category with the least to talk about. I will say though, that I was very satisfied with the way the game handles on a gamepad.

Like any other sim game worth its salt, Project Highrise has many menus to navigate. Clever use of triggers and overlaying menus keeps the screen from getting too convoluted and complicated. These clever systems make sure that the player is never confused about menus and options. Getting lost in Project Highrise‘s menus is nearly impossible for this reason.

Building your tower brick-by-brick is satisfying. I love the sound design around this feature, and the feedback is great. Placing services and other things inside the building is satisfying both mentally and physically. At the same time, mistakes can easily be undone with the delete tool.

While Project High-rise plays great on console, it’s not perfect.

One thing that dissatisfies me in terms of the scenarios is that the scenario goals take way too long to complete. One medal, out of three, can take between 45 minutes and two hours to get. That’s especially true if you are new to this type of game.

Games are always tougher in the opening minutes of a building. It is easy to tell if an initial design for the building will pay off and be sustainable or be a mess that you will inevitably run into the ground. I did not come across any situations where, once I got my buildings up and running sustainably, there was ever a danger of losing it. The game tries to combat this predictability by introducing systems to gauge the economy and raise rent altogether or on specific tenants. The thinking here is that if you don’t account properly for the changing economy, you could be struck with disaster. Honestly though, this was not dangerous enough a concern for me to really worry about.

There is one thing though that I worried about throughout my time playing. That was the amount of time I spent waiting for my small buildings to make enough money to continue growth. This is a feature of many simulation games, but I can’t help but wish there were some way to skirt it. Time manipulation exists, but only in three speeds: Fast, normal and stopped. I would find it more appealing to be able to skip immediately to the next day.

Project Highrise is a charming and wonderful game in every way it is presented.

Text, in menus and out, is big and distinctive. Menus are distinct while maintaining a character profile throughout.

One of my favorite features of the presentation in Project Highrise is the ability to zoom in and look at all of the tenants in the building going about their business. With so much going on, it is nice to see the attention to detail as residents and visitors alike come into the building and shop, eat, work and live.

Otherwise, the game is presented in a simple fashion. Graphics and sound design are both simple, yet charming. I can honestly say I would not change anything about the sound and graphical design of Project Highrise.

Project Highrise is a competent, if sometimes slow, tower simulation. Every new scenario and building type has its own concerns and challenges. Project Highrise is the kind of game you boot up to play while drinking coffee but have a tough time putting down afterwards.

A copy of Project Highrise: Architect Edition was provided by the publisher for review purposes.

Project Highrise goes out of its way to create charming and fun tower simulator. Aside from minor complaints regarding time manipulation, this is a game I can see myself returning to time and time again.

Erich was introduced to gaming by his grandfather before he could walk. Since then, he has grown up loving Nintendo and most games in general. He couples his love of videogames with journalism to cover news, provide reviews and tell it how it is in the gaming world.
Previous Mezco announces Batman ’89-like Sovereign Knight – Onyx Edition
Next Get an early look at Battlefleet Gothic – Armada 2’s gameplay