Easily one of the Armored Avenger’s most distinct armor sets, the “Model 42” is coming to the One:12 Collective.

I can’t say, as an Iron Man fan, I like the Model 42 all that much. But that’s me. I tend to prefer the more iconic looks for Marvel’s heroes. All the same though, this is one of the most standout of Tony Stark’s creations.

The distinct black and gold, taking the place of the traditional red and gold, is a huge change. Honestly, it does look pretty neat, and it’s easy to see why there are fans who love it. That’s probably why Mezco chose it as a new Iron Man variant figure.

While the standard version of old shellhead isn’t even out yet, the toy-maker has announced the Model 42 as a surprise offering. The figure is coming up fast too, hitting next month (November).

Have a look at him here, and pre-order one for your collection (if they’re not sold out yet): 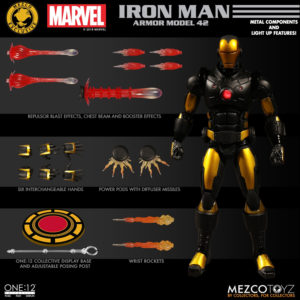 Each One:12 Collective Iron Man: Armor Model 42 Edition figure is packaged in a collector friendly box, designed with collectors in mind.

The One:12 Collective Iron Man: Armor Model 42 Edition is available for preorder at http://mezcotoyz.com/one-12-iron-man-armor-model-42-edition.

Jason's been knee deep in videogames since he was but a lad. Cutting his teeth on the pixely glory that was the Atari 2600, he's been hack'n'slashing and shoot'em'uping ever since. Mainly an FPS and action guy, Jason enjoys the occasional well crafted title from every genre.
@jason_tas
Previous AtGames announces full-size, stand-up home arcade
Next Shadows: Awakening (Xbox One) Review