Honestly, since finishing Hollow Knight, it has been a while since I played a legitimately fun game. Mothergunship is packed to the wall with crazy fun!

Mothergunship features procedurally generated levels and gun modding the likes of which I have never seen. If you are looking for a FPS, bullet hell, roguelike game where you can have 5 rocket launchers, a flamethrower and shotguns (yes plural) on one hand, this is the game for you! 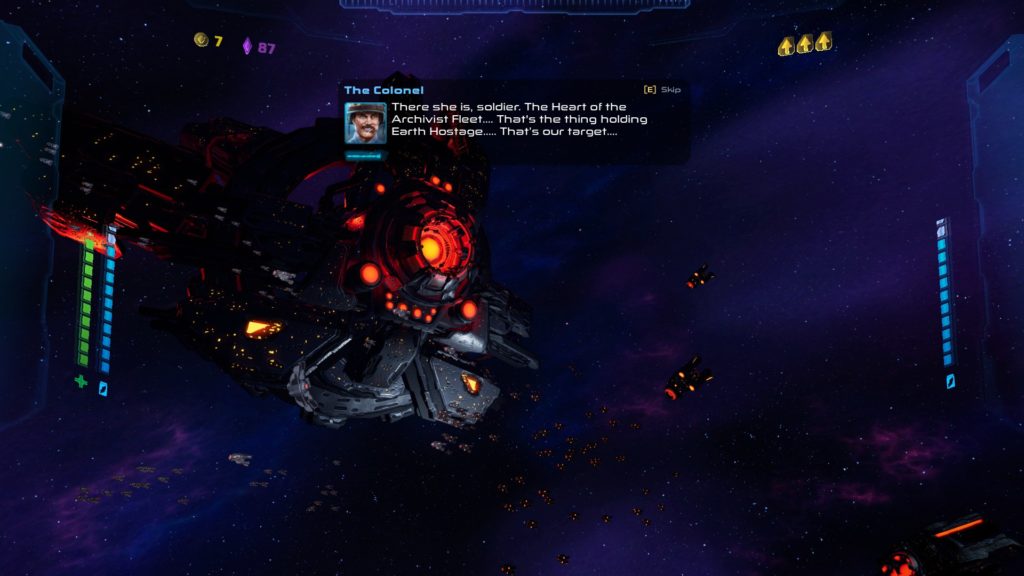 It’s simple: you are a soldier fighting to reclaim Earth from a bunch of aliens called the Archivists. In order to do so, you use coins dropped from enemies and various shops within the Archivist ships to buy weapons. A lot of weapons. You are guided (and are given exposition) via comm chats with the Colonel, ship AI Jasper, and the resident scientist onboard, Wilkinson. The main goal of your mission is to defeat the main Archivist ship: the Mothergunship (boom name drop).

The game mechanics are straightforward for a futuristic FPS. You can move around with WASD and, with your mech suit, jump multiple times with Spacebar. You have a health bar and 2 energy bars for the weapons in each hand. If you fall from a great height you can sustain fall damage and be slowed for a short time. Each hand can fire a customized weapon which uses its respective energy bar. The bar regens passively after you stop shooting but, once fully depleted of energy, you can’t fire anymore for a short duration until it immediately is recharged to full again. 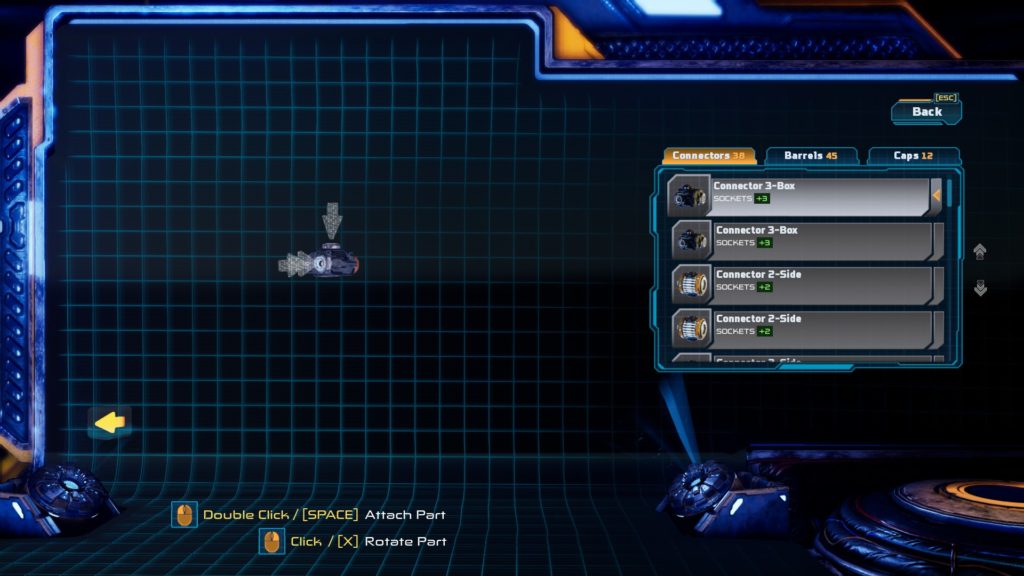 The right to bear arms

Mothergunship’s main mechanic is building weapons. For each hand, you can build a contraption that has a bunch of “barrels”, “caps” and “connections”. “Barrels” are the actual firing bits like laser rifles, grenade launchers etc. “Caps” are little buffs you can add to the gun that can, for e.g., boost fire rate, damage or crit chance. “Connections” allow you to add more “sockets” to the gun and you can rotate everything in a variety of configurations. Barrels and Caps have to be added onto “sockets” but you can’t have a barrel facing anywhere but forward. Obvious right? 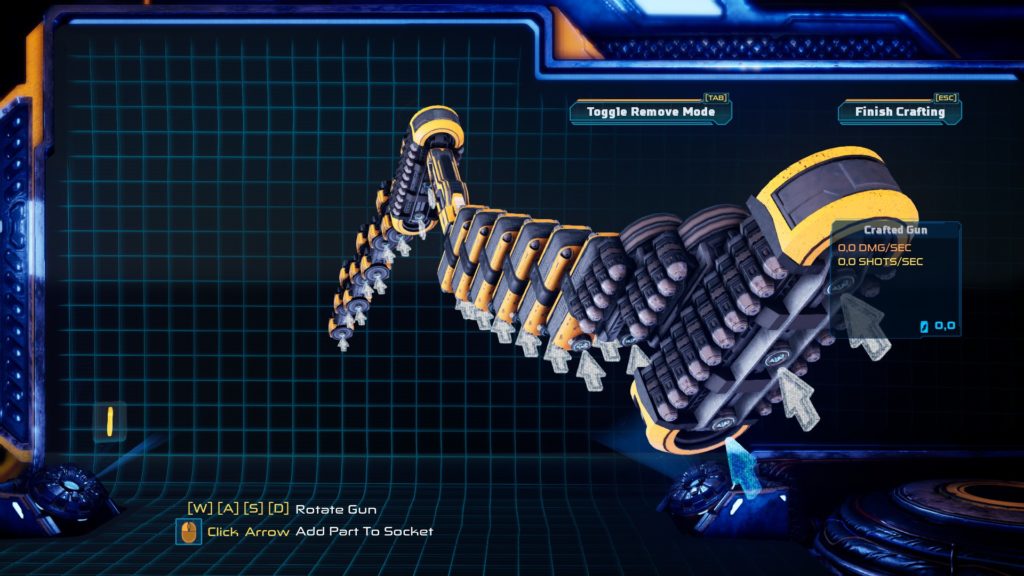 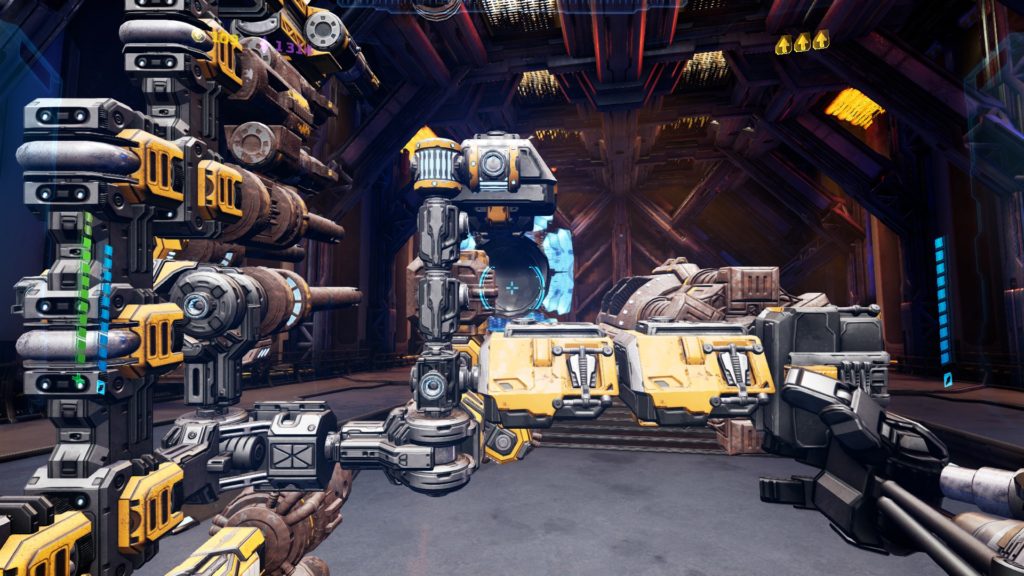 You are presented with main missions and side missions. Some will require you to take along connections, barrels and/or caps. If you succeed, you bring home what you won. If not, you lose what you took. Main missions will progress the story and unlock new side missions while side missions give you opportunities to level up your mech or get more loot.

The level design in Mothergunship is interesting and fresh. Not only are “rooms” randomly generated but so are connections to other rooms and room “types”. Room types consist of “gamble”, “challenge” and “boss” rooms. Gamble rooms are considered more “random” than others usually sticking to a theme such as a “fire” based room filled with lava. Challenge rooms present you with a specific condition that needs to be met to receive a reward of coins such as “not jumping for 60 seconds”. Boss rooms usually occur during main missions and are self-explanatory. They have bosses, duh!

The rooms have a variety of enemies, obstacles and a lot of verticality i.e. they have multiple floors, jump pads or large vaulted ceilings. This variety makes every playthrough feel minty fresh. Combining the rooms openness with all the jumps you can do with your mech allows for exploration of secret spaces within rooms. These secrets give you power ups to help you along the way. Your mech can also be upgraded to help you survive this bullet hell and you can increase your health, speed, secret detection radius etc. 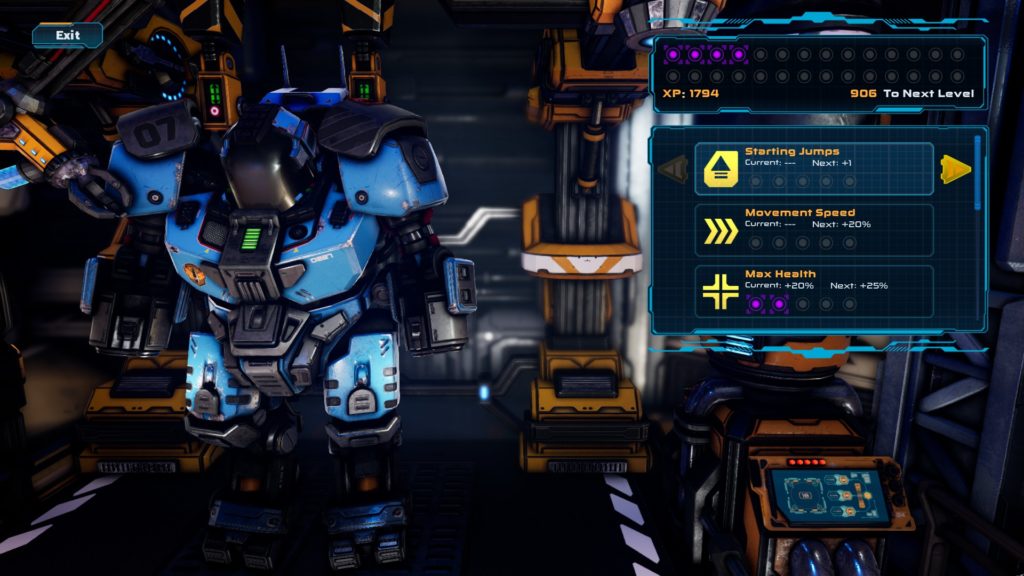 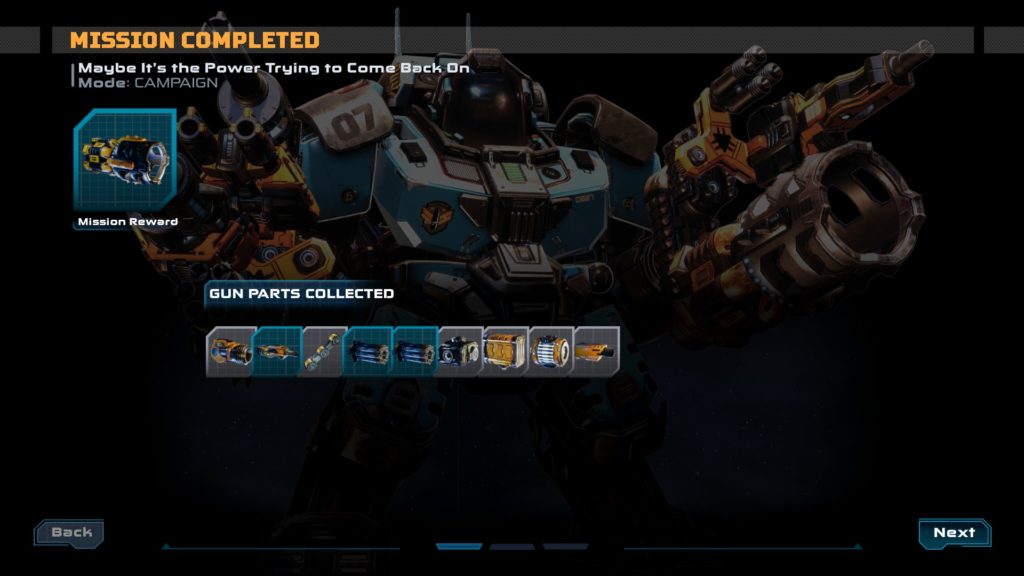 While almost all the above is fine and dandy, there are some improvements that could be made to the crafting system. Sometimes you’ll want to move a barrel from one gun to the other. To do so you have to take it off the other gun by going into that gun menu and switching to toggle off mode and taking it off. It’s annoying to take apart your gun chimeras by having to go into the menus. I’d prefer to have an option to clear all the parts off one hand or both since I found myself doing that often when creating my “abomigunations”.

Toggling between attach and remove mode is tedious. I feel like the tab button is so far away for me I’d prefer another button entirely… maybe Q/Shift? Also, not being able to rotate after placement is annoying because maybe you messed up the position the first time and you want to attach something but now you have to unattach, rotate and reattach instead of rotating once. Of course, if you’ve attached another piece on that piece it’s understandable that rotation on that piece is technically intense. But after a quick attach? These are first world problems people!

Almost all the sound effects are solid. It’s satisfying to hear my weapons scream in unison – a cacophony of guns all firing at the same time but I can single out that one energy stream firing among my multitude of blasters. I can also hear enemies quite easily however it’d be nice to hear larger, more dangerous enemies, via a unique themed sound. I’d turn the corner and get my face melted off by a bunch of machine guns because I didn’t really see or hear them. 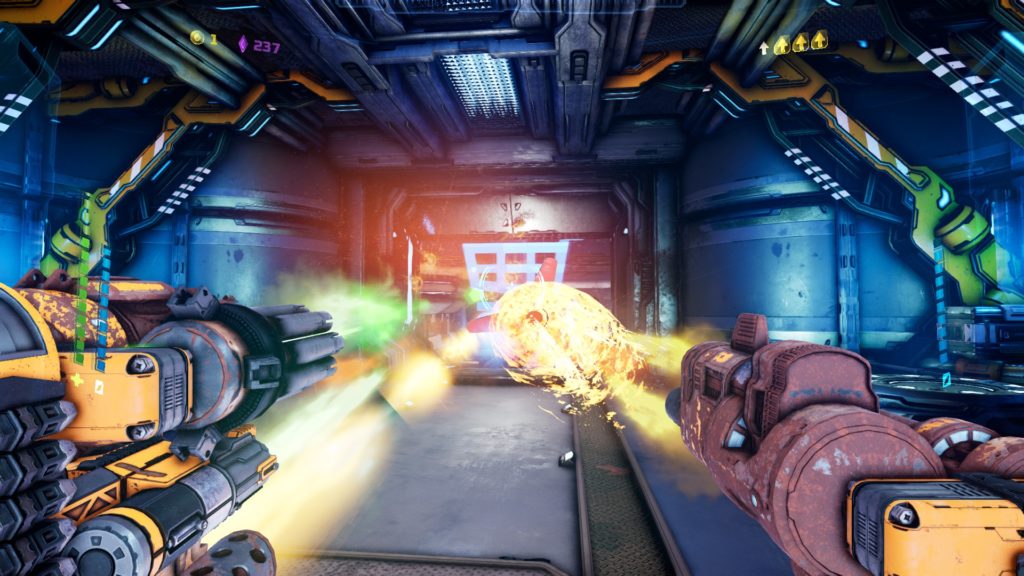 The background music is decent. The genre is clear hard, punching rock/metal. There’s a clear lack of variety as the same battle and idle track is used for nearly all encounters (not that they’re bad – they’re acceptably rocking). One mission had a creepy horror track and I was so surprised there was another background track. I had done a large amount of missions up till then. There’s also a weird, possible audio bug, where after an initial battle track the idle track has saws buzzing in it? I have no clue what’s that about.

The graphics for this game are definitely good. Unreal Engine 4 was a good choice as there are a ton of particle effects (that could use a little tweaking hey?), reflections and textures that look downright great here. The weapon designs are also freaking cool and each one is uniquely animated. I love them to bits! For a non-triple A title it’s impressive.

The UI’s could use some tweaking here and there, knowing the range of weapons would be nice – hint, hint, nudge, nudge. Overall, they’re good – especially the fact that all buttons have text telling you which key they are bound to! So many games don’t do this and it’s really neat to have for ease of use.

This game is actually funny. It has this light, quirky humor to it for e.g. self-destruct buttons are labelled “This is Not a Self-Destruct Button. Nope. Definitely Not.”. The voice acting is also quite good and the jokes generally hit their mark – filling the silence between missions with smirk-inducing dialogue. It makes the characters also have a bit more charm and be less intrusive when they need to talk. In fact, I was saddened when I accidentally forced a skip in the dialogue (I wish going into the build menu didn’t cut my dialogue off). 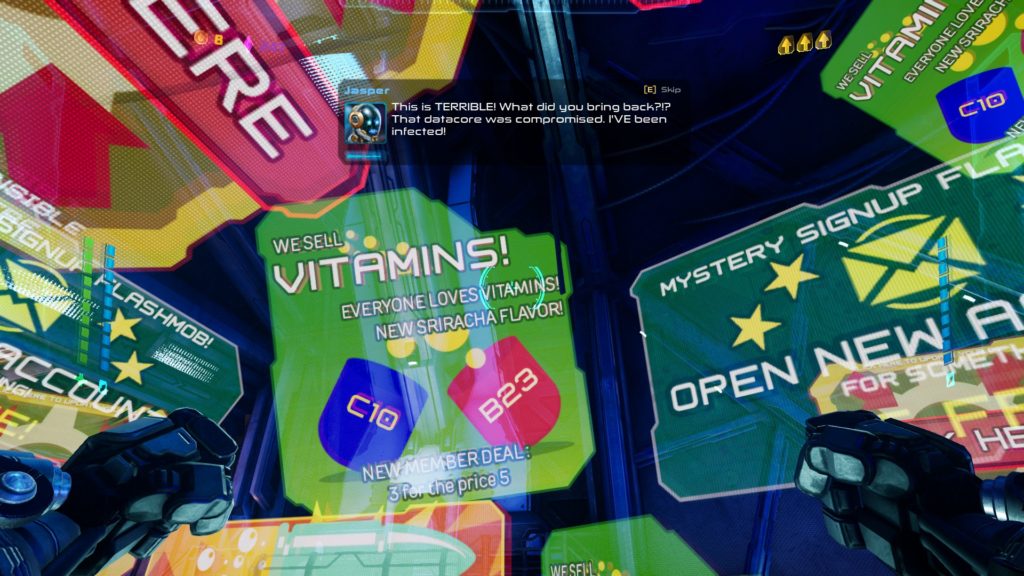 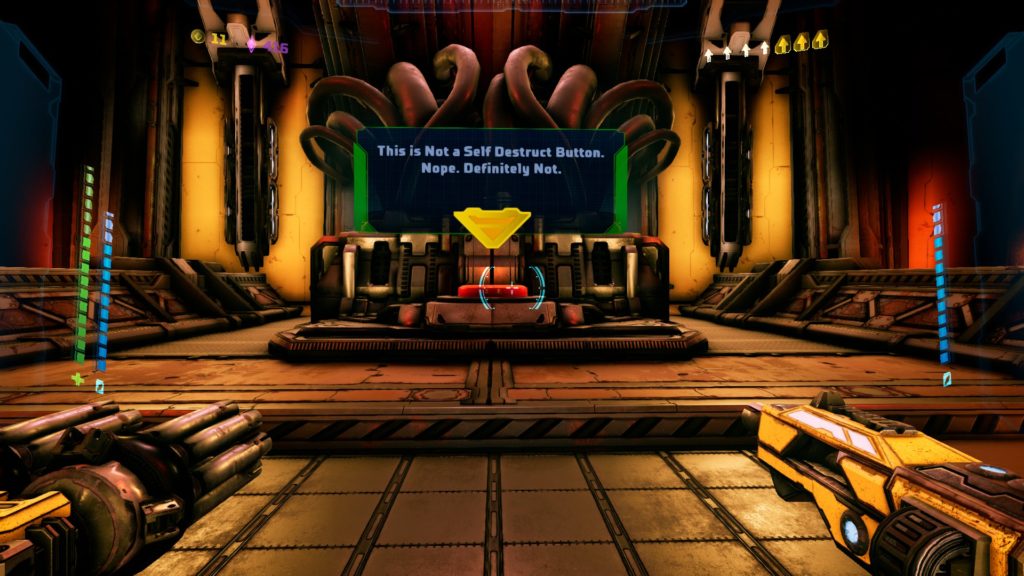 Mothergunship is indeed a chaotic, bullet riddled ride. Changing weapons and changing level designs keep you on your toes while witty moments will have you smiling as you annihilate your enemies. Mothergunship is a ton of fun – Mother-fun-ship. Sorry I’ll leave now. 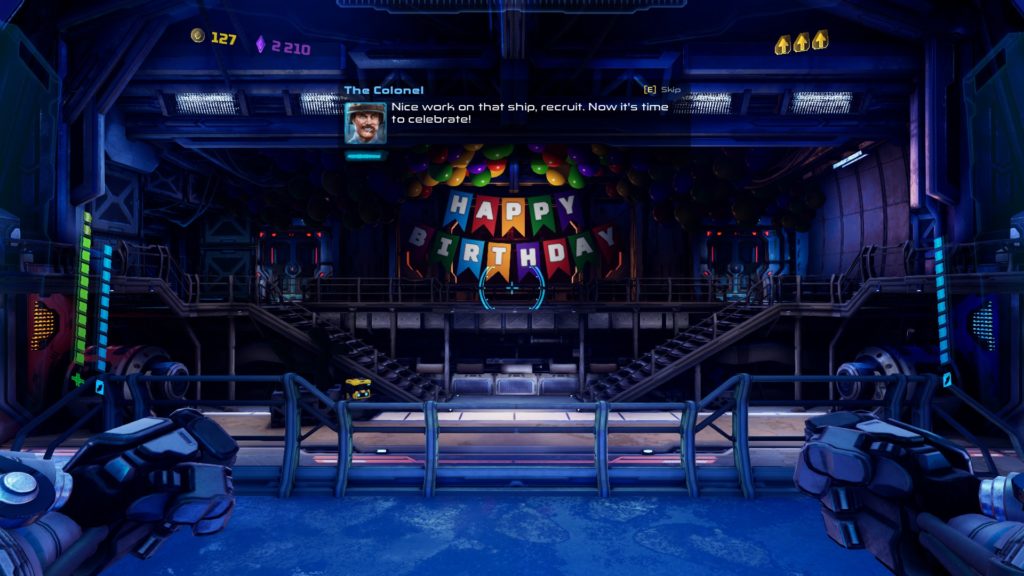 A FPS rogue-like no other, Mothergunship brings back fun into shooter based dungeons with modular weapons and levels!

Megan here! I am pretty well versed in all things weaboo and geek. I've loved videogames since I was born and even made my own for my 3rd year of Multimedia at the University of Pretoria in sunny South Africa. I have enjoyed anime from the days when Pokemon was considered satanic and Aniplex used to exist on DSTV. In the past couple years I have really gotten into manga, particularly Berserk to see where the story headed after the original anime. If there's one thing I will always love 110% it is cats. Don't doubt my faith in my love for felines.
Previous Relive the Justice League’s greatest moments with new book from Chartwell Books
Next Epic tabletop game Gloomhaven getting video game adaptation