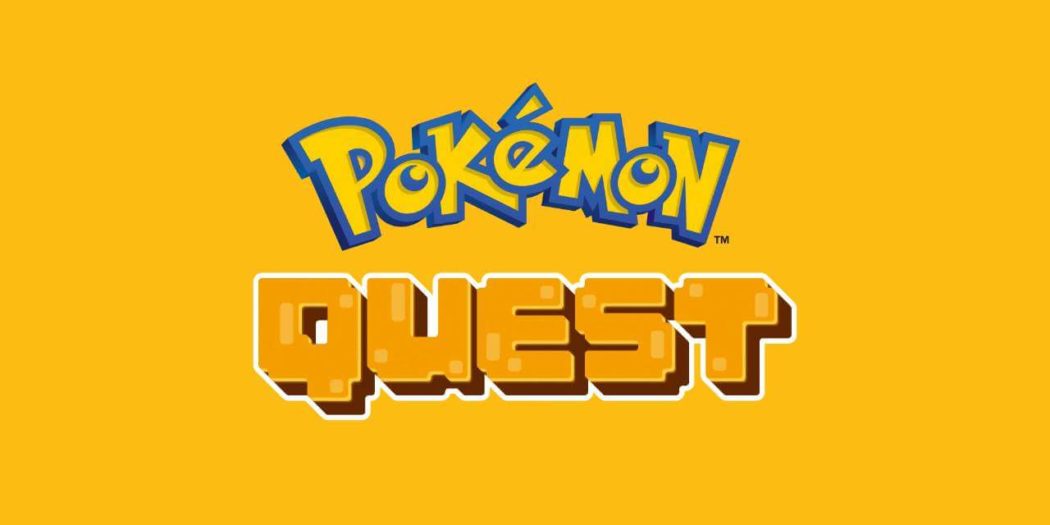 Home / Android / Pokemon Quest: The Phone Game for Your Switch

Pokemon Quest: The Phone Game for Your Switch

Pokemon Quest released for Switch, and serves as a preview to a phone game that plays like a phone game.

If you’re the kind of guy who likes to spend real money on tickets that let you spend less time waiting, then boy have I got the Pokemon game for you.

If you’ve played any free-to-play mobile game in the last five years, odds are you’re familiar with how the pricing structure works.  Download for free, and either play a few minutes every few hours, or spend real money on fake currency in order to speed up the process.

Pokemon Quest lets you in smoothly. I got a solid hour out of the game before I was out of energy. My first ten minute waiting timer stood between me and playing a game. Familiar, when on the phone.  On the Switch, however, I’m accustomed to spending a rainy day playing for stretches at my own leisure. Not as decided by the game. But this is a phone game made available early for the Switch, and so the pay structure should come as no surprise. 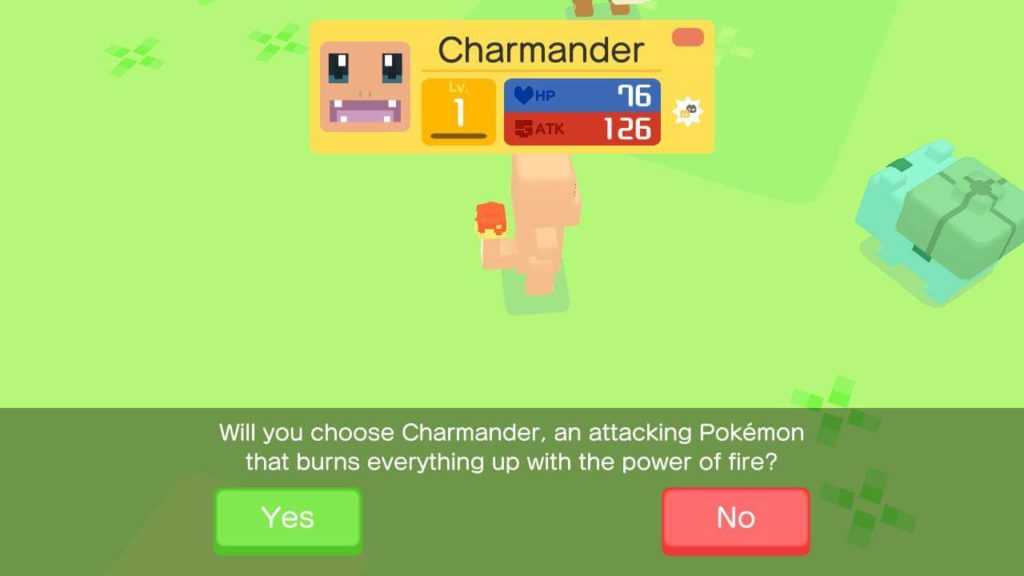 Pokemon Quest isn’t just priced for your phone- it’s fundamentally built for it.  Pokemon move and attack automatically, letting you tap buttons to activate special moves (which all have cool-downs), during your expeditions, which are tiny, mobile-sized adventures in which your cube-shaped Pokemon clear waves of other cube-shaped Pokemon.  You can bring a party of three at a time, each with their own type advantages and special moves. Pidgey, for example, has a long range gust attack, while Growlithe has a Flamethrower attack that deals a steady stream of damage in front of him (which isn’t always pointed directly at your foes). You’ll tap each one as soon as it comes off cool-down until all your foes are defeated and you can collect the spoils of war. 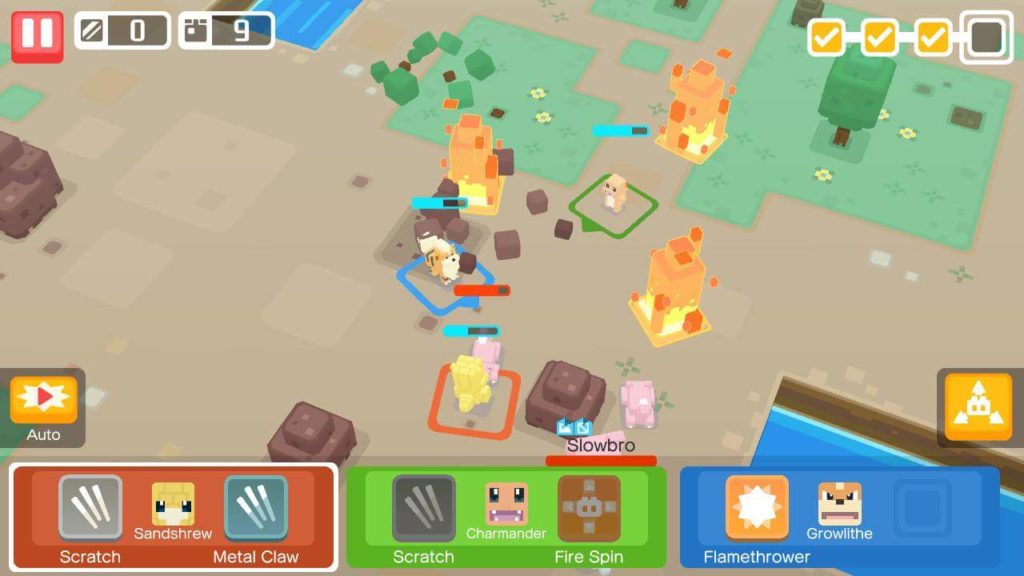 Beyond that, you can decorate your base with items bought with the aforementioned tickets (which, it should be mentioned, are given to you daily in bundles of 50, and as rewards for completing quests, such as cook for the first time, defeat 50 poison type Pokemon, etc.).  Each decoration gives you bonuses (such as more EXP during expeditions, or more cooking item drops), and sits pretty in your cubic base. You can also equip your Pokemon with a variety of health and attack increasing items, some with secondary effects (increased movement speed or crit chance), sacrifice Pokemon to make others stronger, and recycle items you don’t need in exchange for cooking material. 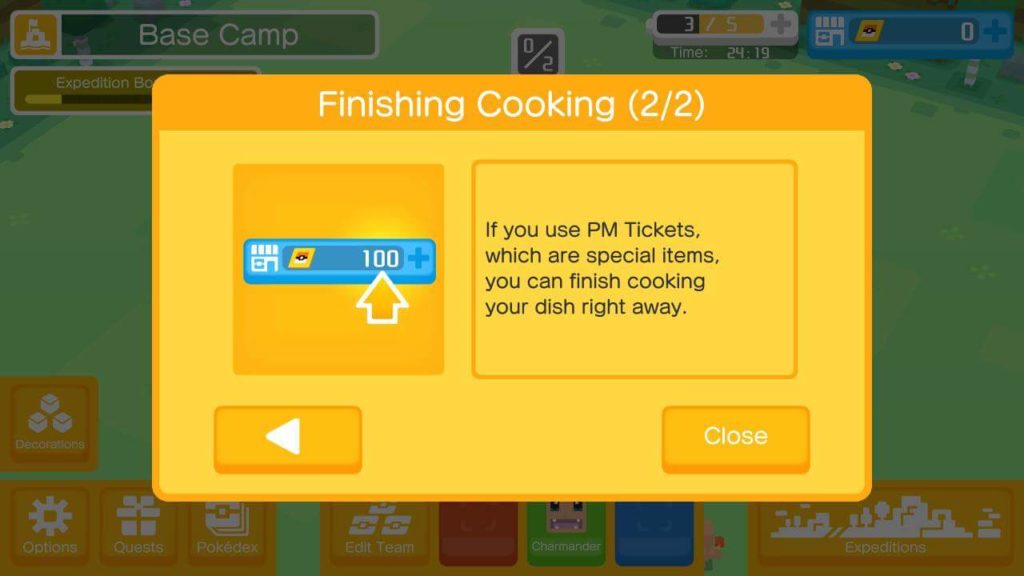 The cooking is also on a timer (based on number of expeditions completed) that can be expedited through the use of tickets, and a completed recipe attracts Pokemon to your camp that you can then add to your party. Different recipes attract different Pokemon, so throw everything into a pot and see what happens.

The menus aren’t supremely optimized for the Switch- you can’t, for example, change to a different Pokemon or menu using L and R when equipping items, and you have to drag Pokemon from one part of the screen to another with an emulated finger, rather than through snappy button presses.  If you want to equip a Pokemon with a Charm that’s equipped to another Pokemon, you first need to make sure that Pokemon is in your party, then unequip then item, and then make sure your new Pokemon is back in your party before you can equip it. There’s no quick, easy button to swap items, or unequip, or anything.  In general, the menus don’t flow together in any way. 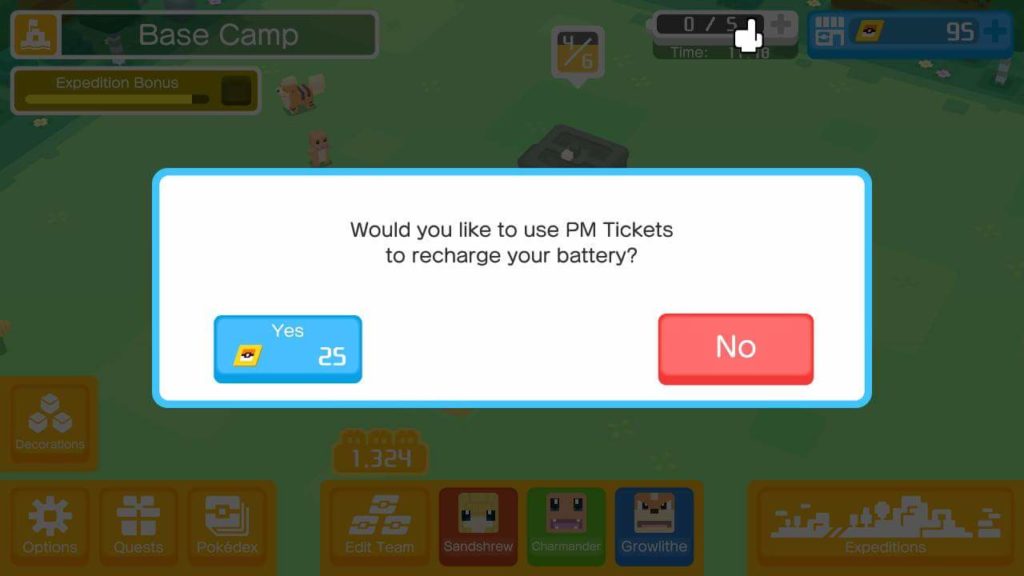 To give you an idea for the timers, you’ll get another expedition roughly every 30 minutes (assuming you aren’t completing quests that give you more energy). Every 22 hours a new Pokemon will show up at your base for recruitment.  Every 2 to 6 expeditions can finish a recipe, though you cap out at about 5 expeditions in terms of total energy. Every twenty-four hours will give you fifty free tickets- it takes 25 to be able to do another five expeditions when your energy runs out.  Every ten expeditions, you’ll be guaranteed a rare item.

Purchasable (real money only) Expedition Packs can increase your daily ticket count, the number of recipes you can cook at once, and your total energy, as well as give you Pokemon with special moves, but can cost you anywhere from $5 to $18 individually (for all three, the total is about $30 for the full pack- which saves you about three bucks). Those three bucks can go towards buying an in-game item (each available in-game). But hey, each purchase gives you like a hundred tickets too, and some Nintendo Account Gold Coins, right?

For all my negativity around the game, like many mobile games, Pokemon Quest does have its strong points.  The mindless expeditions have their own element of fun, and seeing a Pokemon like Scyther show up after you’ve thrown together a gnarly recipe and waited for six expeditions, or acquiring a new Charm that gives crit chance, health regen, and Time to Recover, can be quite exciting. You could do worse with mobile games.  But on the Switch, you could do so much better.

The strategy of main games and the depth of most spin-offs do not exist in Pokemon Quest. But it’s a mobile game, right? A minor, distracting side-activity for when you’re stirring your instant ramen or standing in line to make your order.  It’s perfectly distracting for those moments. For any other time, well, that’s what Pokemon: Let’s go Pikachu and 2019’s core romp are for, huh?

Brutal Gamer's Nintendo Editor began his gaming life a little late- at five years old. But he's made up for it in the two decades since, gaming and writing about gaming with the same passion, fervor, and unrelenting love as his five-year old self.
Previous Sushi Striker: The Way of Sushido Hands-on Satiates Our Action-Puzzle Appetite
Next The Art of Fantasy, Sci-Fi and Steampunk (Book) Review