The rocking soundtrack for Bethesda and iD’s Doom revival is coming to physical formats this summer. Both CD and vinyl formats are available for pre-order now.

Doom’s OST has had an interesting path to this point. When the game originally dropped for the Xbox One, PS4, and PC back in 2016, there was no soundtrack available. That might not sound strange, since not that many games get musical releases, but fans were clamoring for one.

If you’re not aware, Doom’s soundtrack is a wonderful mix of heavy rock and metal. It even worked in the original E1M1 tune from the original game. It’s killer, and garnered creator Mick Gordon more than a few awards.

So it wasn’t too long before Bethesda launched a collection of the game’s music in digital format. I have it, and it’s become one of my favorite video game soundtracks ever. There was however, no mention of a forthcoming physical edition.

But it looks like the Doomslayer just can’t be denied, and so we’ve got one from Laced Records. Well, actually not just one. A total of four retail packages will be hitting for the ‘track, and that includes one that gets you both versions. 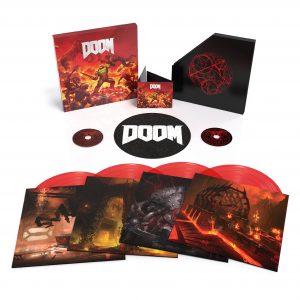 Here’s how they break down:

All of the above are available right now for pre-order. But head’s up, because the window is not a generous one. You’ve only got till May the second to get your order in. After that, these tracks head back to hell.

Jason's been knee deep in videogames since he was but a lad. Cutting his teeth on the pixely glory that was the Atari 2600, he's been hack'n'slashing and shoot'em'uping ever since. Mainly an FPS and action guy, Jason enjoys the occasional well crafted title from every genre.
@jason_tas
Previous EGX Rezzed 2018 Hands-On: Onrush
Next New Jurassic World: Fallen Kingdom Trailer Lands