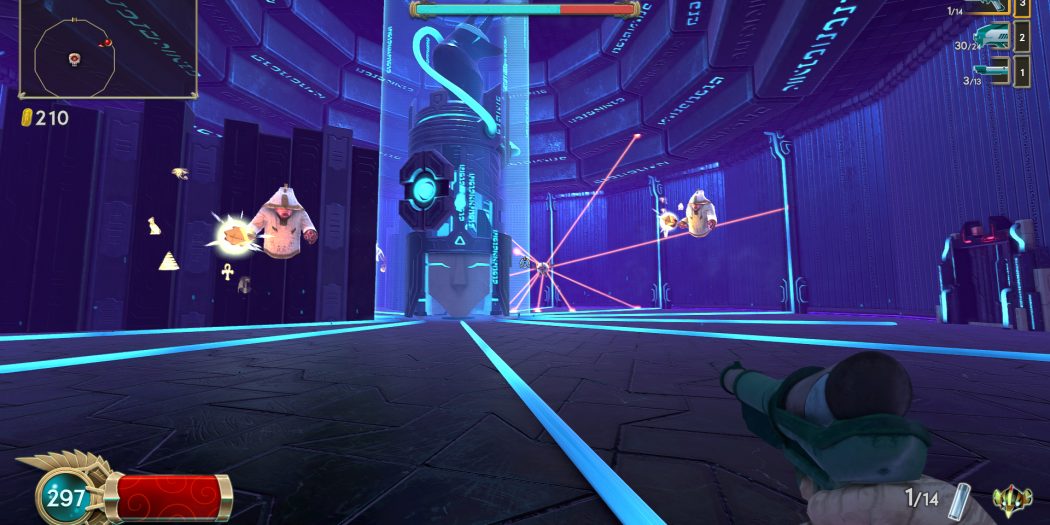 Originally released last year, Immortal Redneck is a procedural generated first-person shooter that blends “rednecks” and ancient Egypt. Yes really, and it’s pretty darn cool. And with this new release, we’re getting the game on Switch.

This might look like a pretty simple FPS at first glance, but there’s a ton more to Immortal Redneck. The game features over 50 weapons, 9 player classes, and a “scroll” system. There are over 100 of those, and developer Crema says they can either help you during your run, or hinder you.

“Immortal Redneck’s scrolls ensure that each run keeps players on their toes, which is perfect for the Nintendo Switch system’s pick-up-and-play nature,” said Guillermo Andrades, Co-Founder, Crema. “As one of the first retro-style first-person shooters on Nintendo Switch, we hope to soon see people blasting and bunny-hopping in public!”

Remember too, that this game is basically a rogue-like, which isn’t something that you see too often in an FPS. So there’s a randomized nature to it, that’ll have different levels created in front of you every time you play. Or maybe I should say “get killed” as the case may be.

With a $19.99 USD price tag, Immortal Redneck will arrive on the Nintendo Switch on May the 10th.

Jason's been knee deep in videogames since he was but a lad. Cutting his teeth on the pixely glory that was the Atari 2600, he's been hack'n'slashing and shoot'em'uping ever since. Mainly an FPS and action guy, Jason enjoys the occasional well crafted title from every genre.
@jason_tas
Previous New Masters of the Universe comic crosses He-Man over with DC’s Injustice
Next Warhammer Quest 2 released for iOS and Android, brings board gaming to the End Times