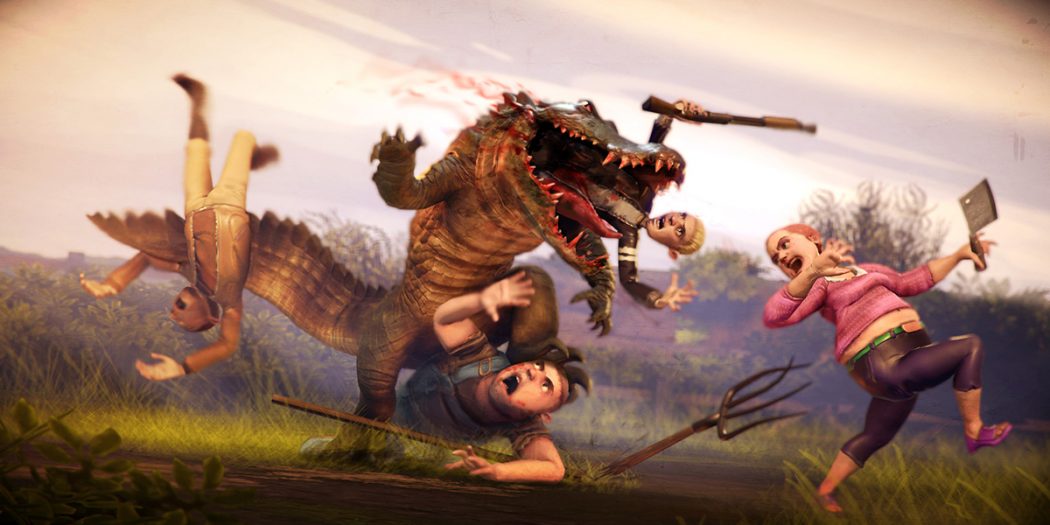 Tired of being the good guy hunting down the big bad evil mastermind? Are you also a misanthrope who tries not to associate themselves with humanity to the point where you wish you were a giant crocodile and could go around eating everyone? Well, look no further than The Hatching.

The Hatching is a top-down slasher where you play as the monster, in this case a giant crocodile. You are let loose in the English countryside driven by your survival instincts and a never ending hunger. You’ll fight off anything that presents itself as a threat or particularly tasty.

While hunting humans you’ll have a blend of stealth and violent slashing. Either charge at your prey claws first, whip with your tail, pick them up with your monstrous jaws and chow them down or launch them at their neighbours. Alternatively, crawl on all fours through foliage and swallow people whole in one bite.

Eating enemies regains health and boosts your rage bar. So you certainly don’t want to leave those dismembered bodies lying around.

Both methods of feasting are effective. Slashing your way through is far more gruesome while you hack off arms and heads. While also difficult as everyone will be charging at you to bring your head back for impressive family portraits. If this proves too difficult or you just fancy something different you can change styles in the tap of a button. Once tapped you will go down to all fours and crawl along the ground. If you stay out of sight and manage to sneak up on enemies you will simply drag them along by their foot, throw them into the air and eat them whole.

But why is this giant crocodile running around eating everyone? It doesn’t appear as though there will be any real reason. Which given the style of the game, that’s fine. This definitely doesn’t feel like the sort of game that even has the need for a story. You are crocodile. You eat people. What more do you need to know? Motive? Hungry.

That’s not to say there isn’t. There just wasn’t with what I played, so don’t quote me on that.

Something I would like to see more of is variations when stealth killing enemies. It was always the same animation. Its not game changing, it would just be nice. Aside from that I really enjoyed what I played and rather look forward to the full release. There’s not a lot of info on the game yet but it’s definitely shaping up nicely.

Massive game and movie enthusiast. In any free time I'm always playing something or watching something. I didn't choose the hermit life.
Previous Conan Exiles goes final, officially launches on May 8th
Next New Masters of the Universe comic crosses He-Man over with DC’s Injustice