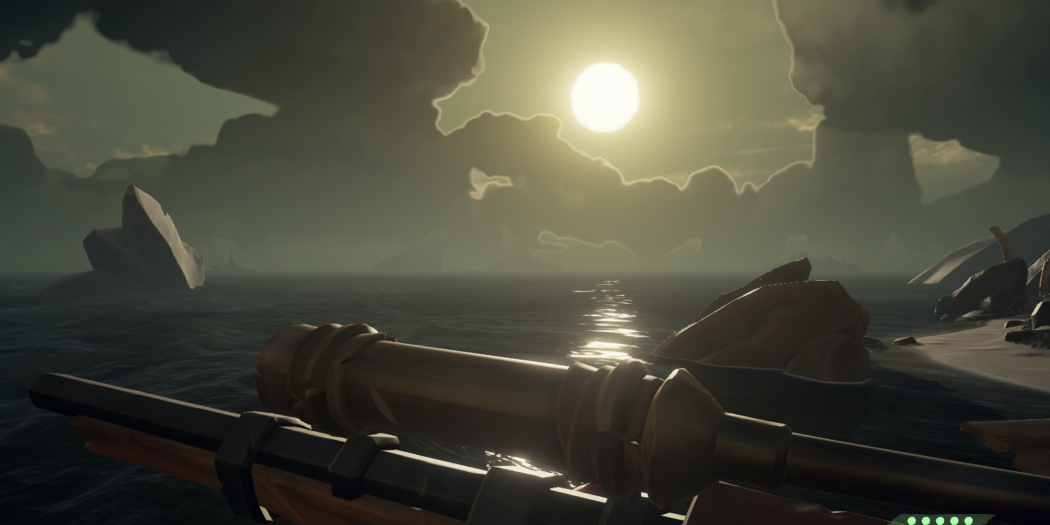 All hands on deck for the high seas in Sea of Thieves.

I just got my hands on Sea of Thieves over the weekend, and while the reviews are already in, I figured there was no better way in helping you pick your side of the fence than giving you a captain’s log account of my time with the game. Four two-hour bouts have given me a small glimpse into the adventure ahead of me, but also a very good idea of what’s to come. 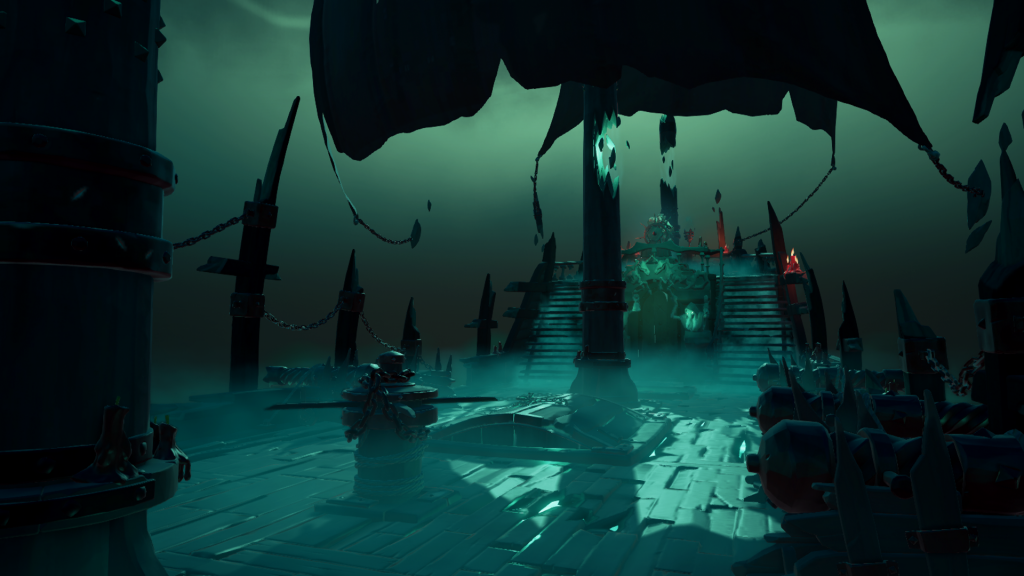 The first couple of hours were on a Galleon.  I joined my friends in dying repeatedly while trying to conquer an island with a floating skull above it (we actually got to the last couple of waves before a sloop killed us four times in a row).  That bit wasn’t very adventurous, truth be told. I learned how easy it was to lose track of somebody who wanted to get on your boat, and how difficult it was for a group of three novices to repair, fight back, steer, empty water, lower the anchor, raise the anchor, try and board, fail boarding, die, come back, die again, and lose a ship.

Actually, the dying and losing the ship bit was rather easy.  Take it from me: I did it four times straight.

After that, my friends got off, and I joined a silent stranger in sailing off into the open ocean.  A third silent stranger joined us in searching for treasure on an enormous island. While I tried to decipher the riddle on the wanted poster (which I learned the next day was not a riddle at all), one stranger got lost and the other requested help tirelessly.

After receiving detailed directions (“North-east”) (I don’t think anyone has ever given me directions like that in a game before), I got lost.  I remained lost, while still puzzling over the riddle, until I followed the sound of my crew mate’s music to where he did battle with gold skeletons on the beach.

I did what I did best at that moment, and quickly died.  Fortunately, that helped me regain track of our pirate ship so that I could sail it around and bombast the skeletons from behind our numerous cannons.

One dead captain later, and we had the first treasure I had ever seen.

The next island went more smoothly, and by the end of the night we had made ourselves a tidy profit (stranger number four joined just in time for an effortless thousand bucks). 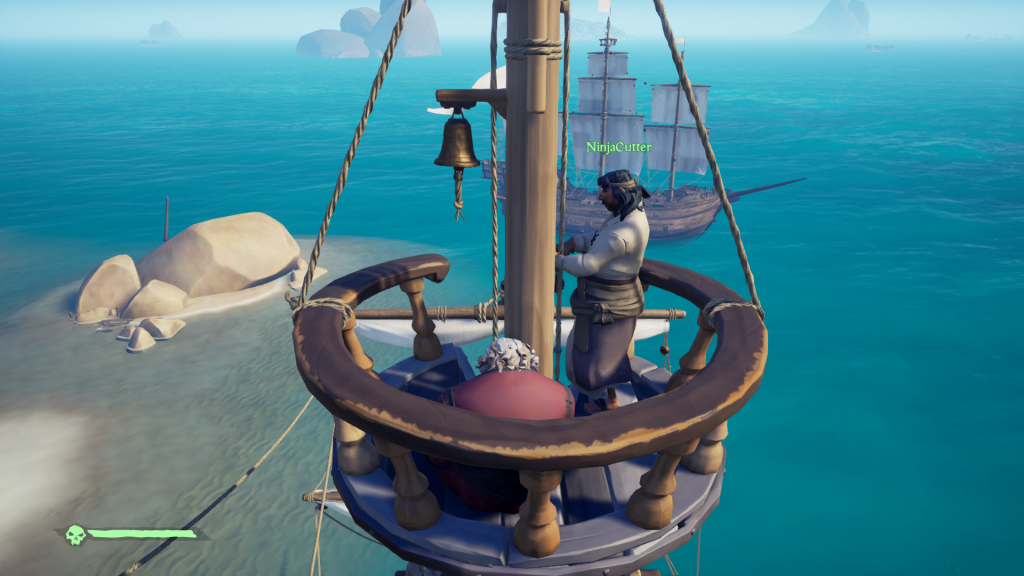 The antics of my dreams (drinking grog in the brig, playing music with strangers, stealing my friends’ treasure, etc.) were nowhere to be found, so when I got on a sloop with my friend the next day, we planned (after half an hour of digging up treasure chests) to live in the true spirit of scalawags.

The plan was simple: sail to the skull island to find other players. Sneak aboard their ship.  Hide until the island was conquered. Keep hiding as they sailed away. And as soon as the music returned to normal, pull out our instruments and bewilder them with strange ditties!

It is not easy to sneak aboard a boat that is paying attention.  However, with the distraction and death of my friend, I was able to make it to the top of a galleon’s mast unnoticed.  I sat in the crew’s nest for the next fifteen minutes.

And I witnessed an intense battle between two galleons and my friend’s sloop, a war waged in stormy seas.

Much more so than my own valiant failure against a sloop, I got a true sense of how exciting the ship combat could be (albeit from a worry-less position of removal).  The two galleons circled islands and each other, trying to nab a favorable position in the storm, testing their range with the odd lob of their cannonballs. Occasionally, they would sail by my crow’s nest.  Or I would watch the splashes of near misses (and not-near misses). Once, the two boats came dangerously close together, and I watched four broadside cannons each unload, splinters fly, and pirates cross from one ship to the other.

It was the pirate battle I had dreamed of partaking in.  I thought about pitching in with my sniper, but was loathe to give away my hiding place.  With all the commotion in the moment, no doubt I would have gone unnoticed, but I had prioritized the mission.

Eventually, the battle was over.  To my dismay, the boat I had made my home was going down, which means I never did get to surprise them with a bit of music.

(It should be noted that my friend did manage to scale the other ship’s mast, but he was shortly followed by one of their mangy pirates. Whereupon he reached the top, my friend blew up an explosive barrel and sent them both to Davy Jones’ Locker.)

In the next play session, we never even made it aboard successfully. 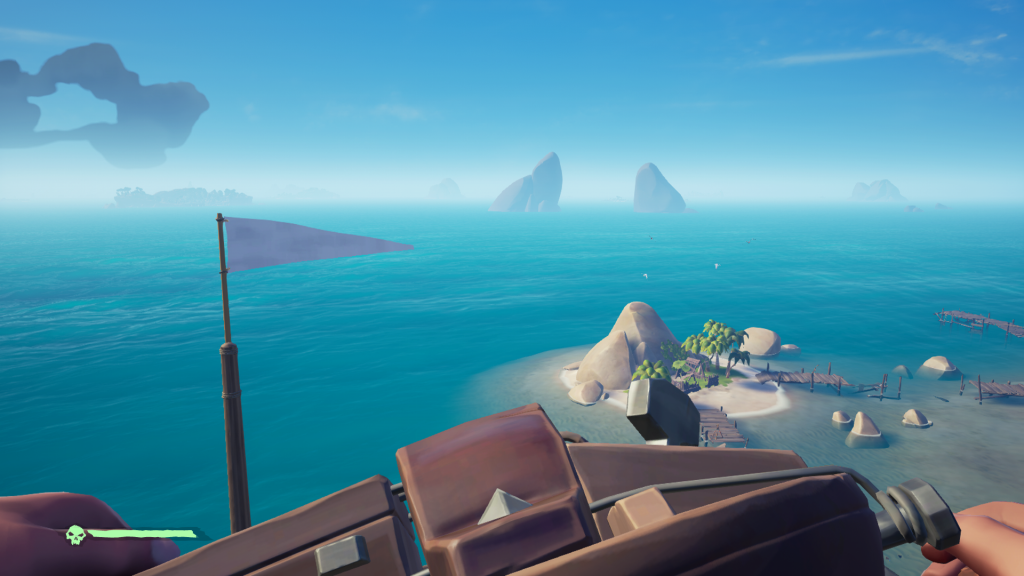 My favorite moments so far in Sea of Thieves are much quieter.  After hours spent fighting for treasure in cloudy, dim, eerie green conditions, our boat finally went down and I spawned far, far away on the most beautiful island I had ever seen.  The skies were gorgeously blue for the first time since I had started playing, and the sea took on that tropical hue from all the postcards of vacations I can’t afford. The greens of the island were vibrant, and even the browns and beige of the outpost’s buildings were cheery and bright.  Everything up until that point had been ugly in comparison.

On day three, we experienced a sunrise on the open ocean. My friends and I struck up a chord and appreciated the spectacle. For the moment, it felt like we were really out on the open sea for adventure, unaware of what the horizon could or would hold.

My absolute favorite bit struck a balance between the two- quiet and intense. 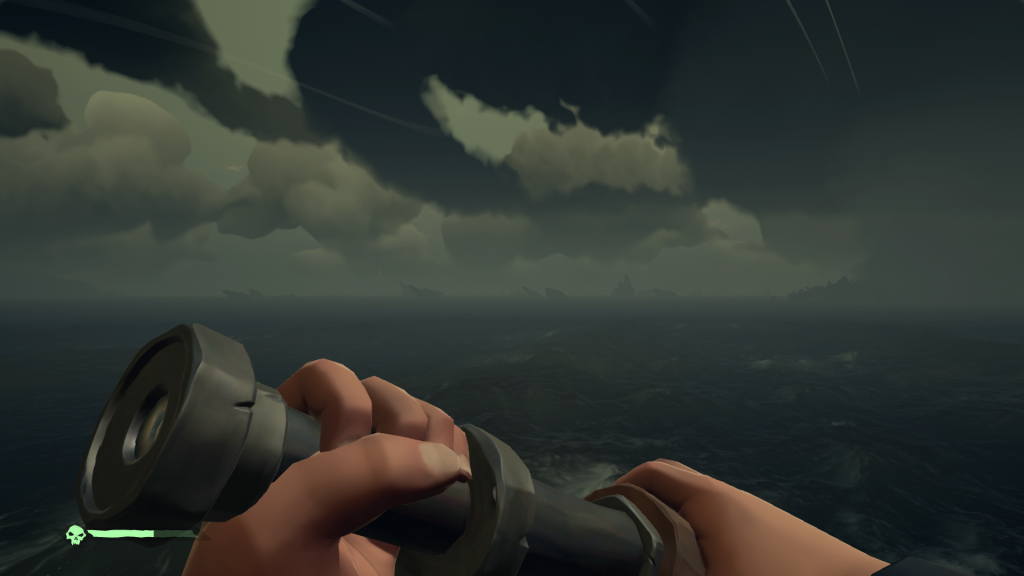 Our galleon had something like $2000 aboard in various chests and skulls, and we were just finishing up the last of the voyage’s quests.  While approaching our destination, we had seen a sloop in the distance. Thoughts of our last run in with a sloop (wherein we had been sunk four times in a row) made us wary, but she was headed elsewhere.

We had a bit of a run-in with the island in question, as in we physically ran into the island.  I take no responsibility for this impact. My friends were the ones who had decided to vacate the boat via cannon, and I could only do so much as the navigator. (I may have the facts mixed up: they could have vacated the boat after repairing it, and the event may have been entirely my fault).

Anyway, in the time it took for the boat to be repaired and the battle against the undead to begin, daylight had joined us, and I settled into the crow’s nest, telescope in hand.  Normally, we wouldn’t care enough to leave someone behind, but we had seen that sloop, we hated sloops, and we had a lot of money on board.

What followed was a tense few minutes.  It was easy enough to watch one, but a second sloop on the horizon put a knot in my stomach.  The slaying of captains (three, which seemed at the time to be an unnecessarily large number) was progressing slowly (especially when one of my friends died).

One sloop was parked at an island we had just left.  The other was slowly making its way around our periphery.  I spun from one to the other from my vantage point, not allowing myself to focus on one or the other for too long.  Sometimes I would anyway, trying to figure out if they were facing away or towards before settling on one (and switching back to the other).  I admit, I’m about as good at keeping an eye out as I am at steering.

Which turned out to be an issue, when I lost track of one ship altogether.

Day One had been a lesson in the dangers of losing track of pirates, and so I was stricken with panic.  I scoured the seas with my telescope, hoping they had simply sailed too far away, into the fog, on adventures that had absolutely nothing to do with us.  And in doing so, I lost sight of the other sloop.

I started ringing the bell on my ship, figuring I couldn’t be trusted to find them anymore than I could be trusted to keep track of them in the first place (or in driving the ship, or in fighting pirates).  I called to my friends over voice chat to forget about the last skulls and to hurry up and help me with the anchor.

They didn’t hurry up, but ultimately they didn’t have to.  We never saw the sloops again that night.  But the anxiety I felt when I thought we might just lose all that gold to another poorly fought battle upon seeing sloops that might or might not have even thought about approaching our much larger ship was something I hadn’t experienced in a multiplayer game before.  It was exciting.  Exhilarating.  And paid for the dress that helped me to become the Drag Pirate Roberts. 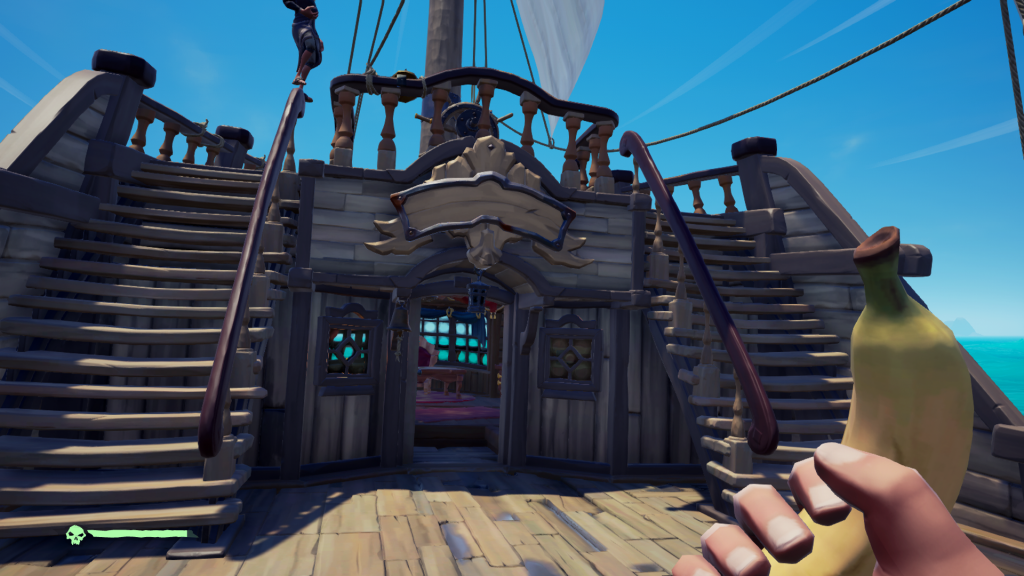 After the first four days of playing, one friend had already asked if the only reason for getting gold and playing on the seas was to look better.  Digging for treasure still hasn’t gotten old for me (there’s something inherently satisfying in digging in the right spot the first time your spade meets the dirt), but the small number of mission types and enemy types isn’t lost on me.  So far, every day has provided its own crazy, wacky, social journey, and I’m confident that Rare will continue to add and fix and iterate. I didn’t buy Sea of Thieves planning on a year-length relationship, but I’m prepared to get that invested.  Especially if the next few days are as ridiculous and enjoyable as the first few.

Hopefully the updates include ship naming, strapping crew-members to the bow as figureheads, and different drinks with different effects.

As I play more, I will continue to share the many misadventures I experience, so keep an eye out for Part 2 of Sea of Thieves Adventures.

In the meantime, how has your keelhauling and hornswaggling been going? Let us know in the comments below!

Tags hands on rare sea of thieves Xbox One

Brutal Gamer's Nintendo Editor began his gaming life a little late- at five years old. But he's made up for it in the two decades since, gaming and writing about gaming with the same passion, fervor, and unrelenting love as his five-year old self.
Previous Watch this video for Marvel Strike Force on mobile and you’ll be helping pets in need
Next Friday the 13th’s Jason is ready for pre-order from Mezco